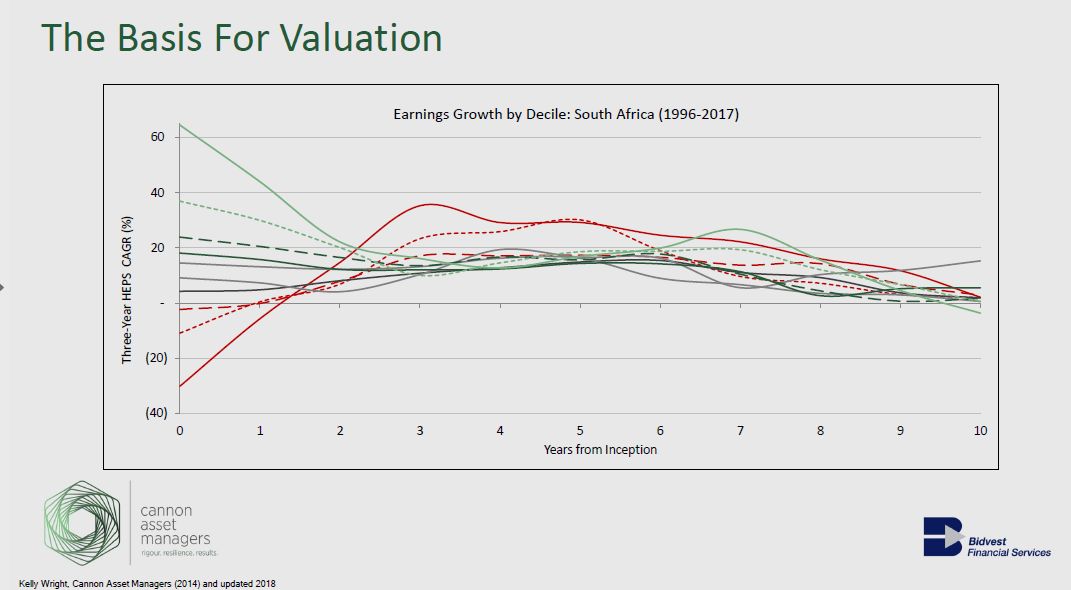 During his recent interview with Tobias, Adrian Saville, CEO and founder of Cannon Asset Managers in South Africa, discusses why mean reversion is such an important factor in investing. Here’s an excerpt from the interview:

Tobias Carlisle: And, some of that marketing collateral you sent through to me, just to change gears slightly, you had a fascinating chart showing mean reversion in the return on invested capital of many of the companies in the South African stock market. So, let’s just describe that chart for us please.

Adrian Saville: The chart is one of the tools that we use to … Or, the evidence in that chart is one of the tools that we use to help us think about how to value a business. Most of the time businesses are valued as if they’re going to sustain their recent record, and if that recent record is disappointing then this is a business that’s in trouble, it’s going to enter the death zone, or if it’s a business that in the recent past has generated impressive results the industry habit is to straight line those in excel styled fashion. What the South African evidence points to is a very powerful force called mean reversion, and that businesses that have acceptable balance sheets, and viable models, if they are in a tough patch now the throwaway is – this too shall pass, and how long does it take for this to pass? About three years, and mean reversion has kicked in.

Adrian Saville: By the same convention, businesses that have demonstrated impressive recent performance give up that record with the next three years or so. So, you have this convergence back to the mean, both in the laggards and the stars, both of them converting to the mean within a three or four year period, and if you push this further, five, six, seven years, once you’re out of five, six, seven years almost your entire universe is doing little more than returning a cost of capital. So, your return on invested capital for the market as a whole unsurprisingly is about your weighted cost of capital.

Tobias Carlisle: Yeah, I love that finding because I have that chart from Michael Mauboussin that I put up in a lot of my presentations, and a lot of my books that shows an identical… 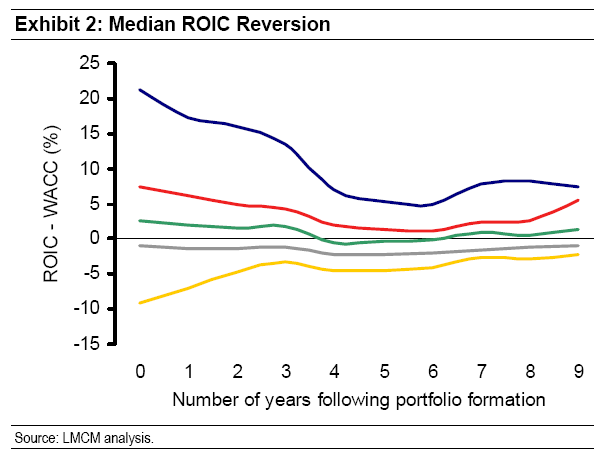 Tobias Carlisle: No, no please.

Adrian Saville: But it was his research that sparked us to do the exact same thing for South Africa, and well I wonder if that’s here, and absolutely, it’s here.

Tobias Carlisle: And perhaps even more so for some reason. It really stands out in that chart, that mean reversion is a real phenomenon.

Adrian Saville: Yeah, and I could give you in the current conversation, I could give you many names that in the last five or six years have gone from being absolute superstars a few years ago. If you ask the on the street investor what should you own they would’ve given you names like Mediclinic, and Medcare, and Mr. Price, and these businesses in the last two or three years, this mean reversion has really kicked in, and I hope I’m not saying that in a gleeful way. You don’t want bad things to happen to anyone’s investment or business, but it’s a really healthy reminder that stardom is hard to find, and even harder to retain.