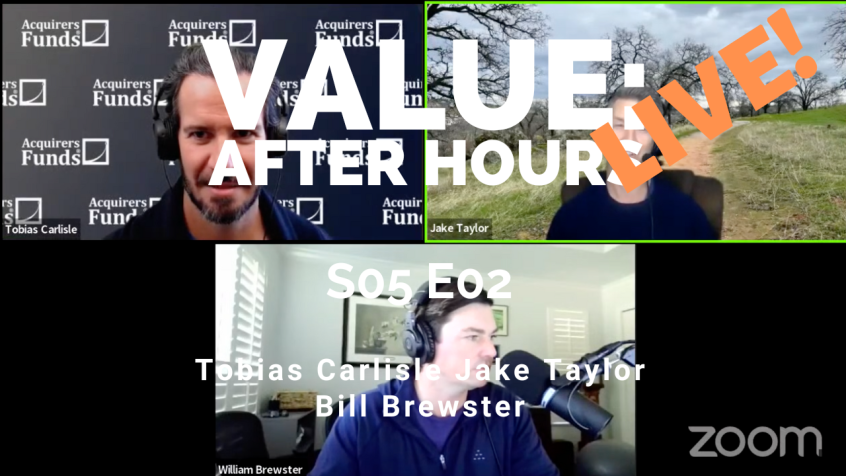 In their latest episode of the VALUE: After Hours Podcast, Brewster, Taylor, and Carlisle discuss Biggest Surprises Of 2022. Here’s an excerpt from the episode:

Tobias: Let’s change directions a little bit. Good one from Samson. “What surprised you the most in 2022??” I think that’s a good one. We probably should have done something like this at the end of last year, but for a variety of reasons– [crosstalk]

Bill: Nothing. We all predicted it all.

Tobias: That’s a good one, because it’s worth looking back to what did we think was going to happen and what didn’t happen. I thought we were going to sell off. I thought we’re going to sell off a lot harder. I’ll be the first to cop to that. I think that early on, I was saying even before the start of last year, because I did a podcast with– name’s just escaping now, sorry, where I said I think that– this is like Q4 2021 when I said if you start from February 2021 peak in Ark as representative of the tech complex and then you wind that forward 18 or 20 months, that gets you to Q3 or Q4 last year, when I thought we’d see all the fireworks. And that didn’t happen.

Bill: That surprised me.

Bill: The fact that we still talk about Cathie, that also surprises me.

Tobias: What’s still one of the biggest complexes around? She’s still very– [crosstalk]

Bill: How long did Janus take?

Tobias: I don’t know. I was a value guy by that point.

Bill: I’m just hiding in value. It’s a good place to hide, by the way.

Tobias: It was. Yeah.

Jake: Yeah. I think you’re probably right. Probably, the timing taking a little longer for that. Although I felt like 2022 was finally a little bit of a return to reality, which felt nice. I don’t know. TC, how many Thursday afternoon conversations that you and I have about like, “What the hell is going on around here? Are we losing our minds or is this just [crosstalk] lost their minds?”

Jake: Yeah. Just mutually talk each other off the ledge. Just make sure that– “Wait, cash flows still matter or are we just totally off base here?”

Jake: Well, there were these very interesting, compelling arguments, and there always are in these situations. I think Graham has said that you can get in a lot more trouble with a good premise than you can with a bad premise, because a good premise starts out and is very powerful and can push you too far very easily.

Tobias: Yeah, that’s a good point. That’s the problem with a lot of those investment thesis is that the idea underlying is a good idea, the business is good. Look how fast it’s growing. Look how much money it is making.

Jake: Yeah. Return to scale, winner-take-all economics. These are all very powerful forces that seemed unconquerable at periods during that time.

Jake: They very may well could be.

Bill: Just like it went too high, it may have gone too low.

Jake: I think there are less of those than what people thought a year and a half ago.

Bill: Yes, I think [crosstalk] with that.

Jake: But what are we talking about? It was like a tiny revenue miss.

Tobias: No, it’s nothing. If you’re in it because it’s a growth company and it starts shrinking, then that’s a problem.

Bill: Yeah. The guy that I recently interviewed, that’s Tom Rickett’s interview that I had, if somebody is interested in a thoughtful take on innovation, I might listen to that. That was an interesting– But I did think he had an interesting insight. He was like, “You got to get out before maturity.” I asked him why and he’s like, “Well, basically, have you ever seen what happens to grow stocks and they hit pockets?” It’s like, “Yes, I have,” and it’s not pretty.

Tobias: What about inflation? How does everybody feel about their inflation prediction last year?

Bill: Well, it was way off.

Tobias: Has it been transitory or not? What have we decided?

Bill: I think a lot of things are coming back in a big way, but I didn’t think eggs would be 5 bucks a carton and I definitely don’t think you should go out and buy Cal-Maine right now, by the way. I know that there’s some people that like it.

Bill: I’ve seen egg cycles before. We used to bank an egg company.

Bill: Egg cycles are rough. You better know what you’re signing up for, if you’re getting that equity.

Tobias: [laughs] That’s so weird. Why? Why would there be egg cycles?

Bill: Because they just lay so many of them that– Sometimes, there’s so many eggs, they just spike them on the ground to break them.

Tobias: Oh, not kidding. That flood them like a– [crosstalk]

Jake: I think it kind of a satisfying job. I’m an egg breaker. [laughs]

Jake: You know what? I don’t know what the answer is where we’re going with inflation. I see strong arguments for both. Technology wanting to do more with less, bringing inflation down. Perhaps, a trend back towards less globalization pushing it back up as we reconfigure supply chains. Government’s kind of over the barrel a little bit with how high can they let rates go. Therefore, they have to print more to plug these deficits. That’s got to be inflationary, I would expect.

All these really large forces pushing things back and forth, really hard to know where it ends up. What is troubling though is I found some data on the 70s that looked at CPI on a yearly basis, S&P 500 on a yearly basis, value stocks, US Treasuries, and some other things. What’s troubling is, when you look at that and you try to put yourself into that year, live in that year, I think as I’ve gotten older and done this for longer, it’s really easy to just look back and go, “Oh, 2008 and 2009, 1973, 1974, 1998, 1999, 2000.” You just like call them these little periods. But when you’re actually living inside of them, they’re like– [crosstalk]

Jake: They are long time.

Bill: So, put yourself in the 70s and you look at how the CPI is changing year to year. Inflation came out pretty hot early in 70s, and then it receded in the mid-70s, and then it came back with a vengeance in the late 70s. The idea of like, boy, you thought probably the worst was behind you. You probably called everything transitory at that point. We’ve turned the corner on this, we’ve solved it, we’re moving forward, and then it gets into the double digits at that point. And then, you have to bring the Fed funds rate up to 17% or whatever to finally break it. I don’t know– What I’m trying to say is that it could look better over the next year or two. It doesn’t mean that we’re completely out of the woods for the decade.

Tobias: Yeah. Every single chart now has that big bump in it that seems to be coming back down, but it’s not come back all the way down to pre-COVID levels in many instances. It sort of found this new plateau, where now everything is twice as expensive as it was two or three years ago. But it’s not four times as expensive. So, it’s not as bad. Or it’s not six times expensive.

Jake: Not accelerating from 7% to 8% a year away from us?

Tobias: It’s still expensive. Housing’s still very expensive. There’s still supply shortages in a lot of things. A lot of weird things. Like eggs, it’s another weird one. I don’t know if the price is where it is because of a shortage. I think somebody said some avian flu strain. [unintelligible [00:56:50]