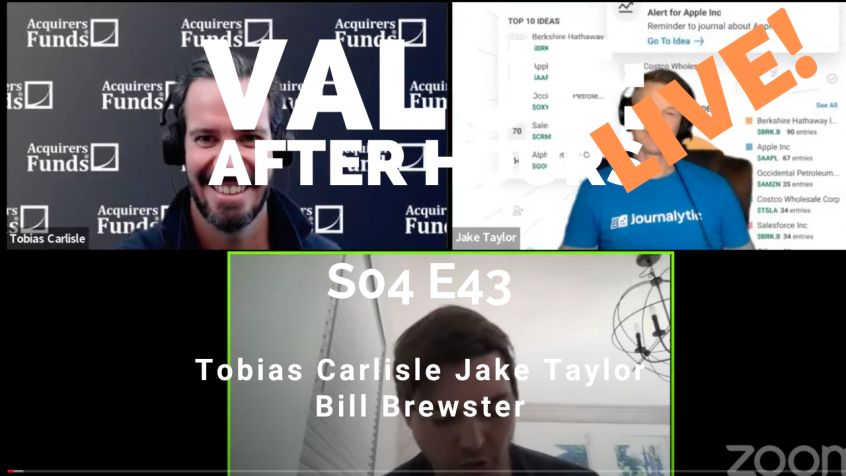 In their latest episode of the VALUE: After Hours Podcast, Brewster, Taylor, and Carlisle discuss Cathie Wood Predicts Bitcoin To $1 Million By 2030. Here’s an excerpt from the episode:

Tobias: Oh, the other thing was, I think this happened after the show, but Cathie Wood has called for bitcoin to a million bucks.

Jake: Does she own bitcoin in ARK’s ETFs?

Tobias: She did it at one point, but she was forced to liquidate.

Jake: Why? Because it’s not approved securities or something?

Tobias: I don’t know. Maybe she was forced to liquidate part of this. That’s the way I understand it. Anyway, there’s some holding in that head to go.

Jake: Probably, because liquidated the top.

Jake: Could be that.

Tobias: No, it was Mr. Burns gave Homer Simpson an Excellent in the Field of Excellence Award.

Tobias: What’s the point of coming out with your million-dollar target on bitcoin other than to get attention?

Bill: I bet we talk about her more than almost any other asset manager.

Bill: So, that’s the point, right?

Tobias: But then, here’s the thing. So, Liver King got busted last night. You guys know who the Liver King is?

Jake: I’ve heard of him. Yeah, what happened?

Tobias: I can’t avoid him. It’s like this bloody Tate brothers are all over everything all the time too. But Liver King, clearly roided out of his eyeballs. He’s got this red physique. He’s got the veins and the shoulders, which are usually a pretty good indicator that somebody’s doing– So, I don’t think you can tell if somebody’s on gear, but I think you can tell with some physiques that can only get better using gear. He’s clearly that dude, right? And so, last night, he’s got busted because he’s sent some emails, needing some advice and laying out what he was taking. It’s like $15,000 a month in– [crosstalk]

Bill: I don’t think so anymore, man. I think it’s just an AUM game and just trying to eke out whatever’s left of her reputation, get paid, and then disappear. Maybe go away for a couple years, open up the next fund, say smelling [crosstalk] shit. Yeah, she’s got one shot.

Tobias: She’s got to get attention.

Bill: So, who the fuck cares?

Bill: You would care. But that’s why I like you.

Tobias: [crosstalk] All you got is reputation. All that other shit goes away.

Bill: Once you go to the beach and you’re no longer talking to people, you could get another reputation.

Jake: [laughs] Buy another one.

Bill: [crosstalk] came to the Bahamas.

Jake: That’s fair. I’m not sure I want to live like that though.

Bill: I know, but I don’t think that you can view the lens of your personal views and try to attribute what’s going on with her. I don’t think you’re the type of guy that would ever get on and say, “Berkshire’s going to a million dollars a share tomorrow.”

Tobias: Anytime anybody pushes their virtue forward, their religion or any of those sort of things like ESG. I’m always nervous. They’re just trying to distract you from what’s really going on underneath. [crosstalk] the ARK.

Tobias: Innovation in the field of innovation.

Bill: I used to want to interview her, not so much anymore.

Tobias: I just don’t think you get a straight answer. There’s no self-reflection.

Jake: I could take the other side of this and say that I think she honestly believes all the stuff.

Tobias: I think so too. I think she honestly– [crosstalk]

Jake: Whether you think that that’s a realistic state of the world, then that’s a different conversation. But I think she’s earnest in what she’s saying. I’m not sure about the math always. Sometimes, it’s a little mathematically challenged but, hey, it takes lot of different viewpoints.

Tobias: But there are things that are knowable and there are things that are unknowable. If somebody is standing there telling you something that they know something that is unknowable, then I know that they don’t know the very basic– Don’t put this on a t shirt. They haven’t figured out the very basic circle of competence type idea. They don’t know what they can know and what they can’t know. They haven’t ever thought about that line and that person is dangerous.

Bill: I guess I almost think that– [crosstalk]

Bill: I think we all agree she’s fairly intelligent, right?

Tobias: No question about intelligence.

Tobias: Motivated reasoning. Part of it too is she’s created this image of innovation in the field of innovation. So now, you can’t really step back from that and say, “Well, what I really want is cash flows.”

Tobias: Things that have traditionally– [crosstalk]

Jake: You tied to that math– [crosstalk]

Bill: Oh, I don’t think that’s true. I think there’s a very easy pivot for her to say, “These companies are going to be so profitable in the future and we just need to go through a little reset here and we’re comfortable with our long-term secular themes,” without saying stuff like, “We’re going to compound at 40% forward or bitcoin’s going to a million.” I think that there were a lot of chances for her to pivot. Now, less so.

Tobias: But if what you’re saying is we’re always finding these– We are able to identify cutting-edge technology in the public markets. It’s like a VC saying we’ve got this superior ability to identify all these new trends. If you then say what we’re doing is we’re looking for stuff that’s– I guess you are saying– [crosstalk]

Tobias: Yeah, real businesses, that doesn’t sort of– You’re already seeing we’re not out right on the cutting edge. Now, we’re stepping back towards this a little bit further back during the– we’re at the cash cow end of the cycle, not whatever comes first.

Bill: Yeah, I guess, I don’t think that that’s necessarily true. I think that you can be looking for the cash cows of tomorrow and continue to do that. But I think that once you start putting forward numbers out there– and there’s a reason that regulators don’t let people typically talk like this.

Bill: I think she’s smart enough to know that. That’s why, I don’t know, I’ve started to get a little more offended over time the longer it’s gone on.

Jake: That’s fair, because I do think that a lot of regular people who don’t do a lot of financial stuff see that and they don’t know that you’re not supposed to talk like that.

Tobias: David Wilson makes a good point. He says, “Tesla to $5,000 actually happened. Once you make one right prediction, it gives you leeway to keep making predictions.” That’s fair. That was a complete non-consensus view that did seem to happen.

Bill: Yeah. Bitcoin could hit a million. The dollar could be worth nothing. It’s possible.

Tobias: Bitcoin can do anything. But to come out and predict it’ll hit a million, it’s silly, right? Show us the reasoning for a million dollars. If it’s like she’s BTC maximalist because as you say, money gets inflated and nothing, then make that case.

Bill: Yeah, and assign a probability to it.

Bill: Keep playing. It’s not sexy to do such things.

Tobias: I’ll tell you something about bitcoin. Bitcoin, when it ran to $20,000 the first time, that was 2017 and it was around about this time–

Tobias: Right, it was around about this time, 2017, that everybody was going completely apeshit. It ran from $15,000 to $20,000. It was all over the news, it was everywhere. We’re now below $20,000. So, there’s a reasonable chance that the five-year on bitcoin goes negative in the next couple of weeks.

Jake: Yeah, I stole something that Buffett did when– remember he talked about the cube of gold sitting inside an infield and then what else could you buy instead of that? And he talked about, I don’t know, it was like 18 Exxons and a whole bunch of other stuff, and you still had a billion dollars of walking around money. I stole that mental model and used it for bitcoin. And instead, you could get Intel, AMD, Micron, Nvidia, basically almost the whole computer hardware industry. Own all the picks, all the shovels, and still have some cash for walking around money.

Then I went back, I don’t know, maybe last year or something and looked to see what had bitcoin done versus my basket of things that I bought or that you could have theoretically bought for the same market cap as bitcoin and it was like– It wasn’t even close. Owning productive businesses crushed owning a token.

Jake: Well, if there’s nothing to anchor to, then you can go as high as the next guy wants to trade it for.

Jake: Mm. Whoa, what if this is just a big St. Petersburg Paradox playing out, where if it’s a big enough number than the expected value, then you have to put all your chips in on.