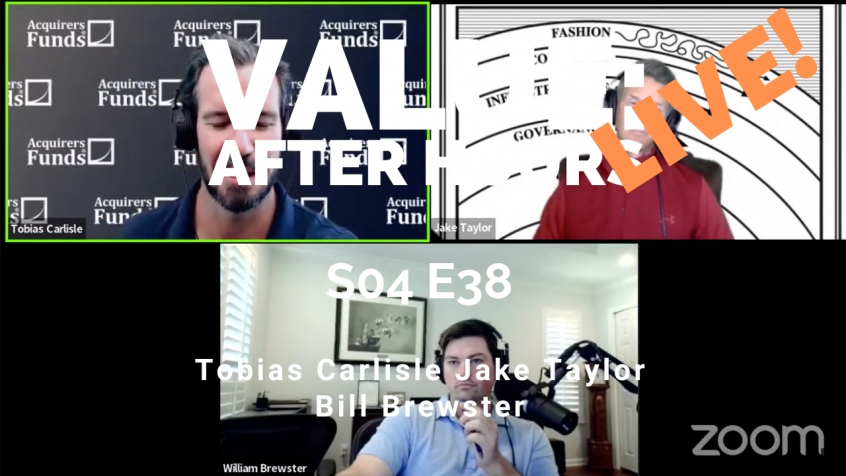 In their latest episode of the VALUE: After Hours Podcast, Brewster, Taylor, and Carlisle discuss Pick A Stock Or Credit To ‘Lose’ The Most In The Next 12 Months. Here’s an excerpt from the episode:

Tobias: I got a game. I tweeted this up last week. “You have to pick a stock or credit for the next 12 months long or short, no derivatives. The winner is the investment that loses the most.”

Jake: We’ve played this game before.

Jake: It’s not an easy game to win.

Bill: You’re telling me, I want something that’s going to lose.

Tobias: When I tweeted this out, a few of the suggestions that I got shot long.

Tobias: It was long. Beyond Meat?

Bill: Yeah, that one could be a zero.

Bill: Beyond’s a pretty good pick. Beyond might be my pick.

Tobias: Someone’s got a short Carvana. Pretty good argument actually. The upside is very high and the chance to have a small or big, may be everything works out for them.

Bill: Yeah. They’re saying a short on Carvana could lose the most-

Bill: Yeah, I can see that become like a face ripper of a short covering. I can see how that stock can go a lot higher.

Tobias: I got a few on the-

Bill: I think a long Beyond has– [crosstalk]

Jake: What’s amazing is how you could almost make arguments long or short on any of these as being the winner of– [laughs] That’s what makes this game devilishly difficult.

Tobias: It’s a contrarian game. It’s a hard one.

Bill: The biggest loser. I don’t know. Man, the thing that’s tough is you’re going to have something that’s down like 80%, you know?

Bill: They’re going to get a lot of there– [crosstalk]

Jake: I might go somewhere a little more esoteric into that 100-year Austrian bond.

Jake: But I’m not sure they’re going to be long or shorted. I just know that there’s convexity one way or the other.

Tobias: Yeah, that’s right. That’s a good one. Yeah, to lose the most– Yeah, it depends on a little bit with the market’s now.

Jake: It’s down a lot from what I saw and it’s rightfully so when rates move the way that they have. If you just tried to– let’s say you wanted to– Probably shorting it might be the way to lose the most in a year.

Tobias: Yeah. Well, you get the leverage. Yeah. So, you got some stuff with China exposure that’s not impacted yet? Starbucks?

Bill: Beyond stuff to be, I think. That product has no need in society.

Tobias: I saw Beyond Jerky. I almost took a photo of it.

Jake: What’s that made out of, the leftover burger patty?

Tobias: They just let the Beyond Meat dry up a little bit.

Bill: There’s a chance that enough environmentalists want to get off meat and beyond can survive. But I don’t know, it’s one nichey product, I don’t know that should be a publicly traded company.

Jake: Doesn’t it have all kinds of just gross oils in it too, that-

Jake: -no one should be adjusting?

Bill: People don’t care about that.

Jake: Aren’t you trying to be healthy when you eat that?

Bill: No, you’re trying to save the planet from that thing-

Tobias: It could be principle.

Bill: -which I can understand. I don’t do things like that, but I understand collective action and being the person that starts it. I got a couple of friends that stopped eating meat. So, I get it.

Jake: What do you have for dinner last night?

Bill: Oh, so much beef and lobster.

Bill: Yeah. I was telling you, I had enough to get gout.

Bill: It was awesome.

Tobias: Snowflake has been nominated here. I don’t know if that’s long or short, but I’m guessing long.

Bill: Ooh, I don’t think people should be looking at it. I think snowflake’s probably closer to a buy than anything.

Jake: So, short would rip your face off?

Bill: Yeah. Dude, it’s down 24% and went public at that valuation. That’s got to tell you something.

Tobias: And one of the Berkshire boys is in it at the listing.

Jake: Long it to lose money?

Jake: So, we’re not playing the lose money game now.

Bill: Think about what that stuff has taken on the chin. Snowflake, down 25% in this rate environment with that valuation? If you don’t think that the market sees something special there, I think you need to get your head checked. So, obviously, it needs to come true, but I don’t know, you think that’s going to lose the most over the next 12 months? I don’t think so.

Jake: Catch down with all of its buddies that are already down 90%.

Bill: I don’t think that company goes down 90%. Maybe.

Jake: This game was easier to play a year ago, wasn’t it?

Tobias: Yeah. I don’t know, what’s the name for that–? It’s a bell curve and at two ends, it’s got the Moron and the Genius both coming to the same conclusion.

Tobias: Mid Twit has the complicated version. Both Moron and Genius say China’s uninvestable, but the [unintelligible [00:52:01] in the middle says at some risk-adjusted point, you take [crosstalk].

Tobias: I feel that’s right in the middle. At some point– [crosstalk]

Jake: Ah, the guy in the middle this whole time. It’s going to be a Jedi. [laughs]

Bill: I don’t know. Russia was not priced in for US investors.

Bill: China so far hasn’t been priced in. I think whenever I’ve gotten these feelings of like, “Oh, geopolitical risk might be priced in?” Fuck that. What do I know about that risk?

Tobias: Some bloke has asked me three times. Masoud Bahraini, “I’ve got a game without giving a prize.” The prize is you get a shoutout on the show in a year, if I remember. That’s the price.

Jake: What you won’t.

Tobias: The winner will remind me.

Bill: Yeah, you just got your name read out loud on the premier finance podcast in the world, where people are demanding.

Bill: Many people are saying it. Yes. That’s the prize, bro. Probably drink a bottle of wine tonight and congratulate yourself for that kind of a shoutout. That was huge.