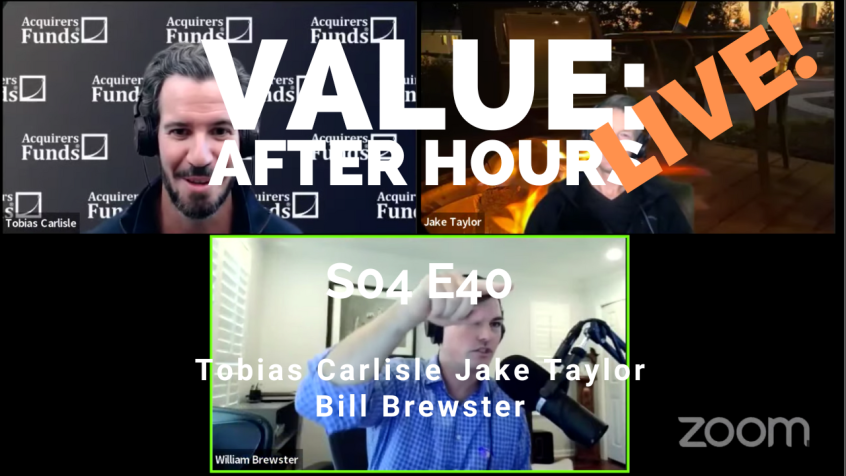 In their latest episode of the VALUE: After Hours Podcast, Brewster, Taylor, and Carlisle discuss Growth Investing In Value Industries. Here’s an excerpt from the episode:

Bill: Well, I wouldn’t say that everybody’s bulled up. Here’s something that surprised me and I think I’m going to interview him soon and I’ll ask him to follow up. So, go on the record as this. Bob Robotti referred to himself as a growth investor. And I think that traditionally, when I’ve thought about his portfolio, it’s more value-based, but his argument would be on maybe trafficking in value industries, but there are industries that I see consolidation in and on the backend, there’s going to be earnings growth. I thought that was an interesting way to categorize it. Maybe I miscategorized him in my mind.

Then, there was another investor there that really only focuses on monopolies and oligopolies. He’s gone to that group, he’s never pitched something under a 20 PE. His results are incredible. But you ask them, “How long have you owned this? How long have you owned that?” He’s owned stuff 24 years. So, it’s one of those things that if you play that game, you really got to be willing to own that stuff. I think that owning something for 20 years is a whole lot easier said than done. Sometimes, I have a problem owning something for five minutes. I’ll buy it and be like, “Oh, shit. What did I do?”

Tobias: Robotti’s changed a little bit then, because I’ve got some old Columbia– that Columbia Business School value letter that does the rounds. It’s got some of his strategies in there– [crosstalk].

Tobias: Graham and Doddsville. Thank you. Yeah, I posted some of that on Acquirer’s Multiple and he was definitely a low price to book guy at one point.

Bill: Well, I think he might argue is a combo.

Jake: Well, he said this. He actually is looking for companies that are losing money and a consolidating industry, because it’s going to lead to –

Jake: Rode that buggy whip all the way down to zero. [laughs]

Tobias: Yeah, that’s the problem. If you get something that mean reverts, I think that you’re paying low multiples for things. Low price to book with money losers, I think that’s almost the best game to play, but it’s hard– [crosstalk]

Jake: Energy, a couple of years ago, definitely fell into that bucket. You had long periods of losing money for a lot of companies, book value shrinking. So, it could be a little difficult to try to figure out where book value was going price to book kind of way.

Bill: You got to figure out if you want to stay on the train.

Tobias: You had two signals there. You had negative oil and you had Exxon getting pulled out of the index and being replaced with Salesforce. He could have either of those.

Jake: That’s actually pretty good idea that sentiment has shifted in a way that might have created an opportunity.