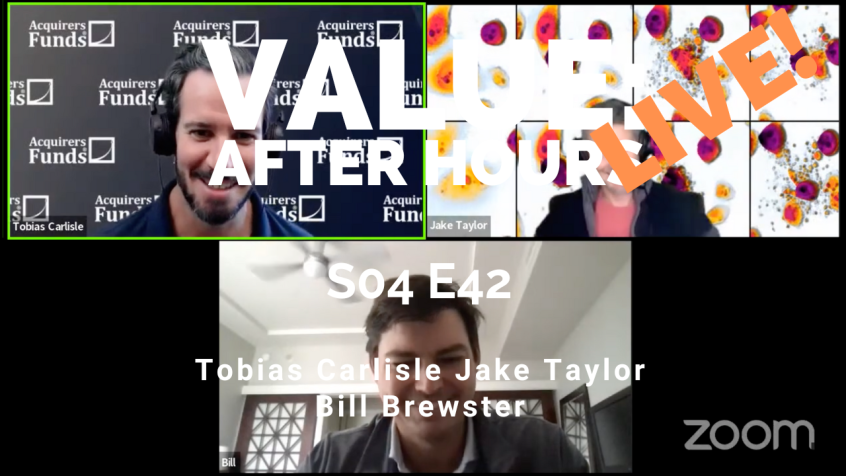 In their latest episode of the VALUE: After Hours Podcast, Brewster, Taylor, and Carlisle discuss Alameda Promised High Returns With No Risk. Here’s an excerpt from the episode:

Tobias: Do you want me to do FTX? [crosstalk]

Tobias: I had to block a bot.

Tobias: This is from Alameda. It doesn’t have a date on it, which is a little bit annoying, but you can get the– They say at this point in time, they’re managing over $55 million and trade $150 to $300 million a day. And so, I’m guessing that this was pretty early on. But this is the second sentence. They introduce themselves and say who they are. Then, they say, “We are the best crypto trading firm in the United States and among the most serious firms across the globe. How much can I put you guys down for so far?”

Bill: Yeah, I was going to say everything.

Jake: Is Bane doing my research for me?

Tobias: They are. Here’s the second page. The way that you could invest in them, they offer one investment product. It’s a 15% annualized fixed rate loan with no lockup, whatever that means. So, they were just basically borrowing from you at 15% and then punting it in the market.

Bill: I like to know lockup so I can ask for my money back at any time and they’re going to give me 15% fixed and I can get my money back.

Bill: And you’re telling me this is a serious firm.

Tobias: Here’s the killer line though. Under the heading high returns with no risk, “These loans have no downside. We guarantee full payment, the principal and interest enforceable, under US law and established by all parties’ legal counsel. We are extremely confident we will pay this amount. In the unlikely case, we lose more than 2% over a month, we will give all investors the opportunity to recall their funds and we will guarantee full repayment.”

Bill: That’s a good deal. That sounds like a great deal.

Tobias: Those blokes have gone to all of the most sophisticated investors-

Jake: That worked out.

Tobias: -and venture capitalists and they’ve raised hundreds of millions of dollars.

Jake: That piece of paper worked.

Tobias: I don’t know if it’s that bit of paper, but if I’d seen that you’d have to start thinking this is a fraud. I see those things all the time. People, they’ve got a currency trading strategy, “You load up the account and we’ll go blow it up for ya.”

Bill: Yeah. My head doesn’t go to fraud, but it goes to don’t give these people money.

Bill: Well, I guess what I don’t want to be is I don’t want to be a guy that’s I would have seen a fraud that other big firms didn’t see. But what I am certain that I am a person that would not have given them money. That I know for a fact.

Tobias: Yeah. I wouldn’t necessarily have known that was a fraud, but that’s pretty smelly that kind of language.

Tobias: And anybody making those claims, at the very least, you got to be away from it.

Bill: Mid-teen returns with no risk in a call option at the capital providers option, that’s something that I will not put myself involved in.

Jake: John Q. Public can stand anything except 2%.

Bill: Well, that’s the old Charlie thing, right? Back when valuations were much higher, what should you do? Reduce your expectations.

Tobias: I think the most annoying thing is that there were typos all the way through it. I can’t imagine how that’s though– [crosstalk]

Jake: Is that right?