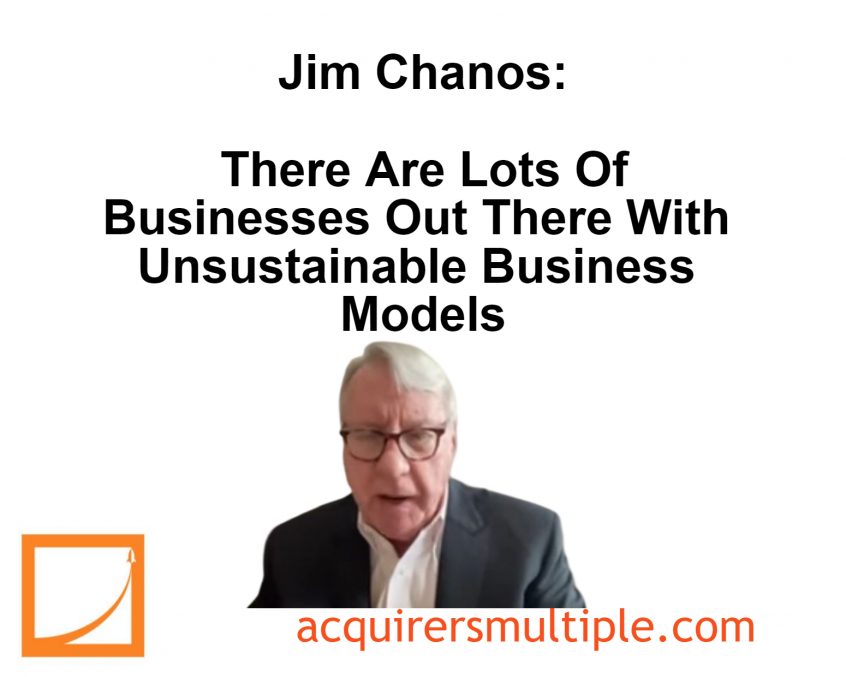 During his recent interview with Simplify, Jim Chanos explained why there are lots of businesses out there with unsustainable business models. Here’s an excerpt from the interview:

Chanos: What most investors haven’t seen, and I saw the tail end of it having come into the market in 1980 is, and it worked itself, in the 70s and 80s into the commercial real estate market, into the banking crisis of 89/90, was nobody was really prepared for long duration rates to stay high as as long as they did.

And it ultimately crushed a number of business models. I don’t think, I think there’s just lots of businesses out there right now, I’ve highlighted commercial real estate that just don’t work at six and seven and eight percent interest rates, they just don’t work.

You can’t refinance. Your equity is wiped out if you refinance. So you can’t pull money out of your deals anymore, and so the whole movie kind of plays in reverse. People were buying apartment buildings at three percent cap rates not that long ago, a year ago, and warehouses, and my favorite Data Center REITs, and office buildings.

This year alone the New York City office REIT stocks went from basically a six percent plus cap rate to a 10 percent cap rate. Stocks are down 50 and 60 percent when that happens.

And so I think that there’s a lot of business models out there that are kind of embedded long financial assets at low coupons that people don’t realize that they have.

A lot of the green plays, solar leases for example are screaming short. And things like that because they just basically were built on securitizations, really low rates, I’m going to lever a four percent or three percent asset five to one to get a nine percent return.

And it’s just not understanding that that whole that just blows up when rates double. There’s lots of those situations out there and I don’t think the market’s digested should rates stay higher for longer the risks in those business models.