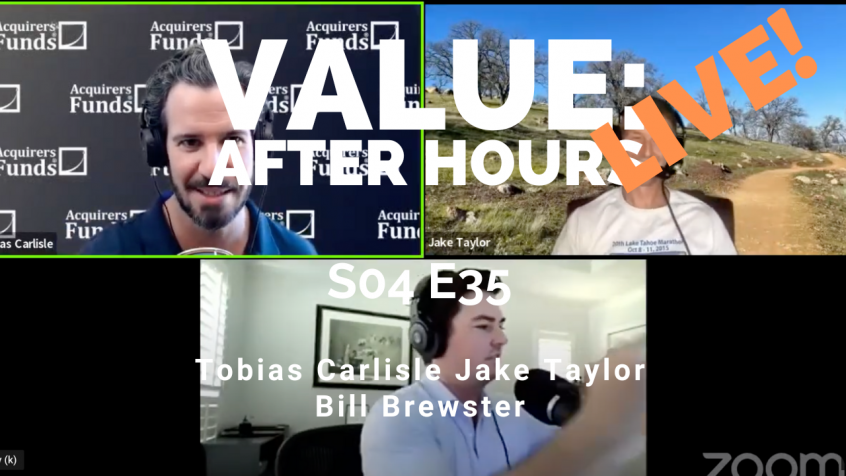 In their latest episode of the VALUE: After Hours Podcast, Brewster, Taylor, and Carlisle discuss Finding Cheap Opportunities Today. Here’s an excerpt from the episode:

Tobias: I feel reasonably positive about the returns for, I don’t say value, but for things that you can do evaluation on. Let me say that. We’re ignoring whether it’s valuable growth here, but it’s fundamental. It’s actually generating some earnings throwing off some cash flow. I do think those things that they’re cheapish at the moment, although pretty good value to me. It does depend a little bit on where interest rates get too, but there’s a fair bit of headroom for some of those cheap ones.

Jake: Is it to play devil’s advocate? Is it possible that there’s some anchoring to the last few years of extreme prices that–?

Tobias: Teasing. Well, not so much the prices, but the E. [crosstalk]

Tobias: Teasing out the E is the difficult– Yeah, that’s probably fair. It’s cheap related to where it has been for a while. From October 9th, 2020, when I was talking about something, I look at these values. My valuations are lower now than they were at that point and all of the other metrics are roughly the same.

Jake: So, two years ago?

Tobias: And I thought that was when I was saying, I thought value was a big long at that point, because I thought it was unusually cheap. Yeah, I don’t know.

Tobias: I can’t get a run on it. You get six months and then-

Jake: It falls over?

Tobias: -falls apart. Even though I think the underlying is performing Jack @econompic illustrates like the underlying, it is doing pretty well. You got the multiple in your face all the time, the contraction you face. Tobacco, energy, that’s right.

Jake: Raising rates will do that to multiples.

Jake: [laughs] Okay. He said no for– [crosstalk]

Jake: We’ll get there. I think will be a good counterbalance at some point. I think we did a good job- [crosstalk]

Jake: -in March of ’20. I think I went back and watched it. We were pretty positive and constructive.

Jake: Yeah, that felt like a pretty safe, obvious thing to do, huh?

Tobias: It’s cheapish now too, even though it hasn’t come back. It’s not as cheap as it was then it’s still cheap. I think it was 1.3 or 1.4 times Book, which is not far– [crosstalk]

Jake: Yeah, it might be lower than that right now. Well, it’s hard to tell. You’ve got to mark down the securities portfolio to something.