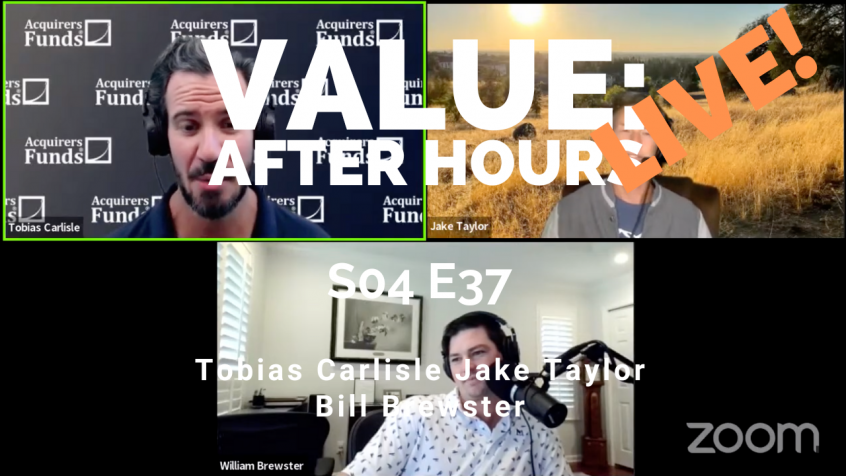 In their latest episode of the VALUE: After Hours Podcast, Brewster, Taylor, and Carlisle discuss David Einhorn Positive About The Future Of Value. Here’s an excerpt from the episode:

Jake: What do you think about Einhorn–? He was talking about how there’s not anyone really left to look at the actual business fundamentals and buy based on that and there are very few people left. And to get a bid, it used to be that value guys, they were like a shock absorber, like a thermostat. You can only get so far down before the value guys would be like, “Okay, this is cheap enough for me to buy,” and therefore, it would recover from there. Whereas if that population was decimated for some ecological reason, perhaps low rates, how low does it have to go to create a whole new batch of value investors that want to come off the sidelines? I don’t know. It’s an interesting– [crosstalk]

Tobias: That’s Michael Green’s argument though. That’s what he says that value [crosstalk]

Jake: Does that say infinity or zero? Because I don’t understand the–

Bill: Two. Two is the answer.

Tobias: To be fair for Einhorn, what he was saying in that– Everybody grabbed the headline, where he says, “Value investing is not going to work anymore.” But the full quote, he was very positive about, he was like, “This is going to be great. We were paying nine times for things that we thought were cheap. And now, they’re at three times. This is a no-brainer. This is easy gain.” I did think it’s the– [crosstalk] there.

Whatever the subsequent return on the stock prices is, it’s almost irrelevant. You’re baking in your returns when you buy. You’re getting reinvestment and flows. That’s why we’re value guys. We’re looking at the fundamentals. We care about the fundamentals. Not the subsequent stock price performance. You’re getting all of that baked in when you buy. There are very good values out there right now, I do think, and the forward returns are higher than we’ve seen at any point since this podcast started. So, I’m very positive. I think in the short term though, there’s going to be a little bit of chaos. But I don’t invest on that basis either. To be fair, I throw all my money in the market when I get it, wherever it is.

Bill: I don’t. I have an emergency like, if I see risk, I will put this out and that’s not out. If I really think people are panicking, I’ll bet that money. And I’m not betting that money right now. But this is stupid conversation that people are having.

Bill: About where things are going, what the Fed’s doing, all this nonsense that is taking so much time and brain space. Look, at the end of the day, the biggest problem right now is the economy is too strong. I got to think there’s some stock that benefits that you can look into that there’s some carnage somewhere. God forbid, the Fed ever cuts rates again, the mortgage industry is going to have a massive bounce back. Do I own more anything mortgage related? No, fuck no, I wouldn’t touch that, but somebody might.

Bill: There’s something to do. I know it.