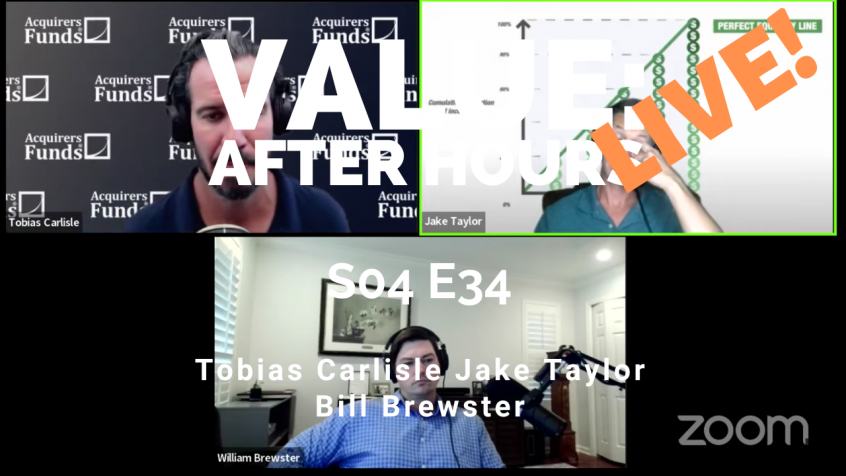 In their latest episode of the VALUE: After Hours Podcast, Brewster, Taylor, and Carlisle discuss A Better Definition Of A Bear Market. Here’s an excerpt from the episode:

Tobias: The definition of a bear, I always found really unusual. I’ve got a completely arbitrary definition of a bear too. But the current definition of a bear is down 20% from the peak and you can get these things like we had and you can see it in lots of assets, house prices, lumber, everything we’ve talked about on this podcast for the last few years, where it runs up a lot. It could spike and then fall back down. And really, it’s round tripped, but technically, it’s in a bear market. To me, that makes no sense.

Tobias: My definition of a bear is just to look back 12 months ago and see if you’ve done more than 20% from 12 months ago, then you know a bear.

Jake: Would you call this segment, Build-A-Bear Workshop?

Tobias: [laughs] I should have.

Tobias: I will now. It’ll be up on the title. We are currently just trading a little bit above that level. So, we don’t have to fall very much. I think we’re at 18% down year-on-year.

Jake: So, in years, we could actually go up a little bit from here. And if the 12-month was up higher, then we can go into a bear without actually going down to it.

Tobias: It is. But we’ve fallen very rapidly this year. This is one of the worst years on record in terms of how quickly we’ve fallen. I saw a tweet the other day. I’m going to forget all of the dates. But there were only three dates that were worse, 2008, 1931, and there’s another one in there that I can’t remember off the top of my head. But those two, that’s pretty bad ones. 1931 was the depression, 2008 was the credit crisis and one of the worst drawdowns. That’s the worst drawdown, the S&P 500 down 56% year-on-year or from a peak.

But I think that all of that put together means that there’s a reasonably good chance that we do go into my definition of a bear, which is the real drawdown. And then, typically what’s happened in the past when that’s happened is that the duration is about three to six months. So, it’s pretty short once you go into it. Having said that, that’s when all of the selling actually occurs. So, everything comes before then is a precursor. I have no idea where the bottom is, but if fair values around 2,300, then probably that’s in play. If 2300 is a possibility and it’s also possible to go under averages, even though, I haven’t seen that for long time.

Jake: Wait, wait, wait, are you saying that you can be under an average? I don’t know. I’m not buying.

Tobias: Evidently, that’s how you get the average. It’s going to be about halfway between the two. Well, I don’t know, I’ve never seen the other side of the average. Who knows what the market’s going to do? No one knows. But I feel you can’t get any sustainable returns until you flush the system, and we haven’t flushed the system for a long time. Every time we get close, the Fed turns around and lowers interest rates and pumps out a whole lot of liquidity, and it just drops everything.