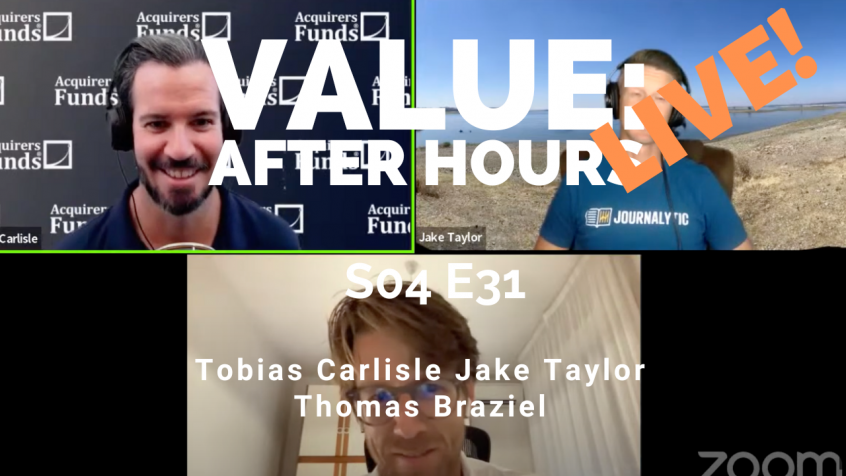 In their latest episode of the VALUE: After Hours Podcast, Braziel, Taylor, and Carlisle discuss Small Caps are Due. Here’s an excerpt from the episode:

Tobias: Let me do Verdad.

Thomas: Yeah, what are you doing?

Tobias: Verdad, so a size factor. It’s not been a great decade—

Tobias: [laughs] That’s what everybody says. That’s not true. It’s been a bad decade for– [laughs] It’s been a bad decade for the small caps. Everybody knows that. It’s been bad in the sense that they’ve performed really badly in an absolute sense, but they’ve also been more volatile. So, the risk-adjusted returns are a hot garbage. It’s got so bad that people wonder whether the size factor continues to be worth anything or not.

When you look back over the full dataset though, the size factor has come in and out of existence and it has delivered better returns at a better risk-adjusted rate for the full dataset. The really interesting chart in here is where the guys look at– This is, yeah, Verdad. I think it’s all the guys put this together. It’s got Dan Rasmussen, Brian Chingono, and Nick Schmitz listed.

Tobias: The Verdaddies. That’s a good one. There’s more than three Verdaddies these days.

Thomas: Another billion-dollar idea right there. Just giving it out.

Tobias: Merch is their second part of their business. Just get that Verdaddy shirt out there.

Tobias: Who’s your Verdaddy? There you go. Dan, you can have that one for free.

Tobias: They looked at the small cap relative discount and the 10-year forward returns. This is the interesting chart. They’ve only been two occasions in the last– I think this goes back to 1927, 1926. There’s only two occasions where small caps got a lot more expensive than large caps. And that through the 80s. And then again, between 2012 and 2017, that five-year stretch in there, they got expensive again relative to large caps. In both of those instances, they’ve delivered terrible performance relative to the large caps, where they’ve been at a very wide discount as they currently are.

The forward excess returns over the large caps have been quite big. And so, it would look like the same problem that value had, where the last decade has been partly working off overvaluation or relative overvaluation at the start to that becoming a narrative that small capsule value doesn’t work to now we’re at the point where the discount is so wide that it likely indicates future forward returns that are good-

Jake: If you just keep putting it out into the universe, Toby. You’re going to secret that– [crosstalk]

Tobias: Do you think is that- [crosstalk]

Thomas: Toby’s got like a seance going on– [crosstalk]

Tobias: Get my little Buffett shrine up.

Thomas: I’ll bring you one next time.

Tobias: Joysticks or a Buffett shire? I need a little Buffett Buddha.

Jake: Oh, I haven’t seen that.

Jake: Oh, was it Andrew Wilkinson?

Jake: I could imagine that would be him.

Thomas: Yeah, didn’t someone do Buffett and Munger– Couldn’t you order [unintelligible [00:37:56] like a quote.

Tobias: That was Wilkinson. I think it was about 900 bucks or 900 bucks each, a little bit too rich. [crosstalk]

Jake: I’m frankly a little disappointed you didn’t get one for me, Toby.

Tobias: You get €10 from Investorblog. So, I’ll put that towards it.

Tobias: Something for Christmas.