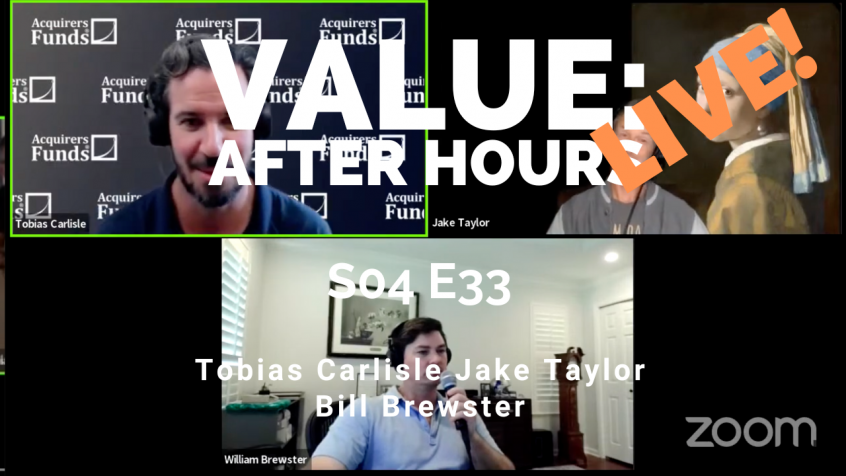 In their latest episode of the VALUE: After Hours Podcast, Brewster, Taylor, and Carlisle discuss Comparing the PE Ratios Of The Nifty Fifty Companies With Today. Here’s an excerpt from the episode:

Tobias: Do you want to do this one now, because they make comments about the PE. So, Nifty Fifty 1970s, the names that he pulled up, Coke, P&G, Johnson & Johnson, Disney, AmEx, Pfizer, as a cohort, they had a PE of 42 average versus 19 for the S&P 500. So, they were more than twice what the market was. And so, he says it’s not fair to characterize it as a bubble that burst, because from that peak, they went on to generate 12% compound. I just– [crosstalk]

Bill: That’s not 50 times sales or some of these other things. [crosstalk]

Tobias: Yeah, and it’s got a bottom line.

Tobias: That’s one of the things that if you constrain the universe and things that have got a bottom line, then you-

Jake: Maybe. Just wanted to point out that there are other levels to that game as well, as far as some stuff that got expensive.

Tobias: True. If you could constrain the universe to things that have free cash flow and you’re doing it for free cash flow multiple, then again, you’ve constrained that universe even more. Just by virtue of the fact that you require some free cash flow, you’ve eliminated a lot of stocks that you probably don’t want to hold.

But then, he’s got this interesting analysis where he says there are three drivers and returns. Earnings growth, your beginning PE and your ending PE, and any dividend that you collect along the way. So, he says, year one, $1 of earnings with a PE of 25, that’s $25 stock. And year 10, assuming that earnings grow 10% per annum, 10% per year, that’s a pretty high rate of growth.

Tobias: Yeah. But these are pretty good companies that collectively had done something like that. You get to 259 in earnings in year 10. He assumes that you get this multiple compression from 25 to 20 and you end up with a $51.80 stock when you started with a $25 stock. And so, your compound return is 9%.

Tobias: Did you just do it off the top of your head? [laughs]

Jake: Buffett- “Well, you already knew have the answer, but you pretend like you’re doing math in your head.”

Tobias: Good one. And so, he concludes that at 25 times, that stock was fairly valued, because it then went on to deliver a market return. And if it had been a PE of 16, same stock, you would have had a 14.7% compound return in that period, which would have outperformed the market and so, it would have indicated that it was too cheap. If it had been a PE of 35, that would have been 5% per year. And so, overvalued. And so, he says that PE 25 was a fair value PE, because it delivered a market return.

Jake: Late 80s is when he bought most of it, right? It was after that New Coke snafu. I think it might have sold off some when he backed the truck up, but I don’t remember.

Tobias: My recollection is it was 22 times. But that might be wrong. Somebody in the audience might know that. And then– [crosstalk]

Tobias: Do you know it, Bill?

Bill: No, I don’t know. Didn’t they also have that movie studio at the time?

Jake: There were all kinds of capital allocation shenanigans that happened.

Bill: So, I don’t know what it’s looked through PE wise.

He’s got some other conclusions about probably what happens in the interim. So, for a decade, if inflation spikes all of these long duration type stocks that have got the high PEs probably get smashed up. But there’s a chart that he includes from Jeremy Siegel that shows how vastly undervalued they were by 1982, which is what then delivered the incredible run through to 2000 and probably where they got overvalued near the end. I thought was an interesting analysis. I’ve seen it before in relation to, I think, it was Walmart. They worked out what you could have paid in Walmart to get a market return from the– [crosstalk]

Jake: Early 70s or something.

Tobias: Yeah, and it was something– [crosstalk]

Bill: Yeah. Got to be able to build a lot of boxes, if you’re going to pay that multiple.

Jake: That’s the thing. If you’re right about these businesses, then fair play to you. I think you deserve to do well. But gosh, if you’re wrong about any of them, the cliff you fall off of is pretty steep.

Bill: Yeah, I think it’s easy in theory to say, “Oh, well, these are noncorrelated bets. What does Walmart have to do with Coke?” or something like that. But if they’re all in the same factor or whatever from a portfolio construction perspective, you could have some real drawdowns. What it really probably is an argument against style drift. Like if you’re going to be a quality guy, you should probably stay quality throughout. Much like value guys probably should have stayed value throughout.

Jake: Let’s think about the businesses that came in that list that became these juggernauts. I think there’s a few things that maybe we can unpack that we can try to see. Does that make them then a good corollary for today? I would say, some of them are in the CPG space, which my understanding is that, because we had this very narrow, tight pipeline of media, where you had three channels, basically, there was a return to scale of advertising that you could do to build your name, if you were Tide, or Crest, or one of these staple, kind of home, ‘Procter & Gamble now owns you’ type of brands. And they got big, because you couldn’t advertise in a million different places. There were only certain places where you could actually get the eyeballs, because we only had three channels. Well, with the internet, that completely explodes that, that direct-to-consumer goods completely explodes that CPG little anomaly in the matrix, where you could build a brand to an extreme level, where you can charge 2X what everyone else was charging, and people would be willing to pay for it, because it wasn’t that big share a wallet, and you just want to go with the brand that you know, Tide, or whatever.

So, that’s a little bit of an anomaly historically, I would say. Whether that repeats today, I’m not sure. Some of these other ones were definitely huge beneficiaries of a rapidly globalizing world, where from the 1980s onward, we just saw tremendous amounts of globalization which allowed for– The profitability of businesses to really get into some extreme places that they couldn’t have gone before with their input costs being kept down.

Tobias: That was Buffett’s thesis for Coke, that it didn’t have any international saturation at all. It might have been saturated in the US, but it had lots of places to go internationally.

Jake: Right. If you are the believer of that maybe globalization might have peaked and we’re going backwards or at least the pendulum swinging backwards for a while the other way, which I don’t know, if you just look at war as a proxy, certainly, I think things are a little more geopolitically fraught today than they were the last 5 or 10 years. If you believe that, then it seems it might be harder to have that global growth that you experienced in the 80s and 90s. I don’t know. I’m not sure how good the corollaries are. I’m sure I’m missing something important that makes this obvious. But– [crosstalk]

Tobias: There’s not a lot of tech in there. That’s one of the interesting things from the names that they threw out. Coke, P&G, Johnson & Johnson, Disney, AmEx, Pfizer. I mean, Pfizer’s tech-ish, I guess, because it’s pharma.

Tobias: But Costco too, not particularly technological. That’s missing Microsoft, of course and Google too.

Jake: [crosstalk] IBM. Is IBM on that list? I think they were.

Tobias: Probably, they were, but not in the article. To what extent is this resulting?