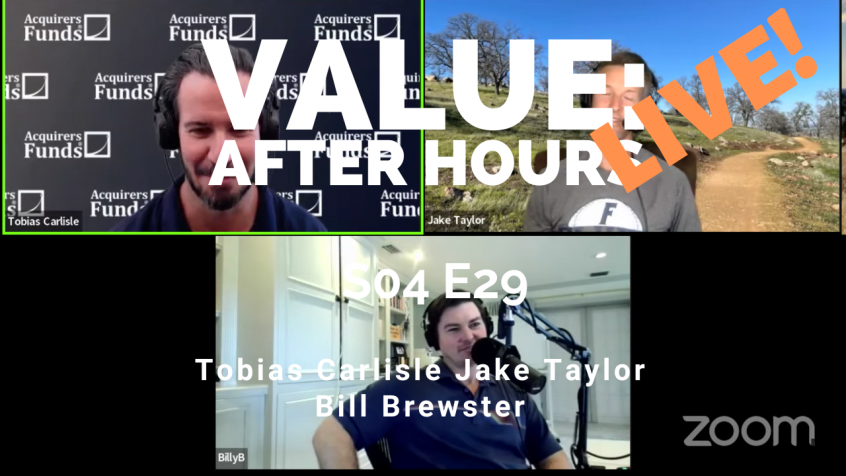 In their latest episode of the VALUE: After Hours Podcast, Brewster, Taylor, and Carlisle discuss Warren Buffett’s Oil Bet. Here’s an excerpt from the episode:

Tobias: Do you think Buffett has a view on oil? Does he need to have a view on oil to be buying OXY where it is? Where does he need the oil price to be for that to work? That’s probably a better question.

Bill: I think this is a really hard question, because I don’t know how he’s thinking about the bet. If you think about the bet, like, it hedges the rest of his book and even if oil goes to– [crosstalk] I don’t know, man, I think he’s built his life in a way that’s very hedged.

Bill: I think people like to say he doesn’t, but I think he does. I think there’s probably– [crosstalk]

Tobias: But you were talking about two different things. You’re seeing hedge for the book and, Jake, you’re saying downside of the individual name, right?

Jake: Uh, I think what Bill saying, correct me if I’m wrong, is that having effectively long oil fits in with the rest of his worldview and the way the rest of the assets are positioned. Is that what you’re saying?

Bill: Yeah, I think what he probably– I have no fucking clue. But if I was him, this is what I would see. I’d be like, “Okay, I’m getting a ton of cash up front, and they’ve committed to not growing production 5%, and they’re going to give me the cash back. I’m going to have investment opportunities when that cash comes back to me.” Let’s say oil goes to 50, what’s my real downside in this bet?

And then if oil does go on some run, I’m going to have a bunch more cash to deploy in a scenario where a lot of stocks are a lot cheaper and it hedges the rest of my business, because maybe I’m implicitly short oil in many different ways. So, it’s one of these, for lack of a better term, Dhandho bets. What up, Mohnish?

Tobias: David Wilson has a good comment here. “Weird he wasn’t buying oil two years ago.” I know someone who was buying oil 2 years ago.”

Tobias: I know someone who was buying oil two years ago.

Bill: I think there was a lot of other things going on. He said, “I read their presentation on capital allocation and that’s when I started to buy.”

Tobias: Yeah, fair enough. That might be the big difference.

Bill: Ah, my man, Francisco, made the first speculation. I’m just piggybacking him. I think what does he want it below? 59, 62, or something? Isn’t that where his warrants are from the pref that he gave them? I thought that’s what I saw. I might be off by the 10s. But I know it is 59 something and I think there’s six. And then I think– [crosstalk]

Tobias: Donald Regan says, “OXY’s slides from last quarter or two quarters ago said their dividend is sustainable at ~$40 WTI.”

Jake: Well, that’s a pretty good bet, probably. I don’t know. Sure, you’ve got 9% inflation helping you already there, right?

Bill: I was peeping his 10Q, man. The operating businesses are humming right now. Talking about double-digit operating income growth.

Jake: This is true of all of the conglomerates that fall in that category. The Markels, the Fairfaxs, the Berkshires. You leave out investment gains and losses out of stupid gap, they’re all humming been pretty good right now.

Bill: Yeah, I saw you bought Markel. I wonder how much of– He’s like, “The insurance market is crazy hard right now. I want as much exposure as I can.”

Bill: Yeah, maybe. I don’t know. It’s your own business, you know?

Tobias: “Negative oil was the green light.” Yeah, that’s what I think too. Had to suffer for six months. I thought I didn’t do anything about it. JT actually did–

Bill: My dumb ass, I bought TGS and OPEC, and I bought Occidental bonds, and I didn’t hold– Well, TGS was a loser of an idea and the bonds I didn’t hold. So, good for me.