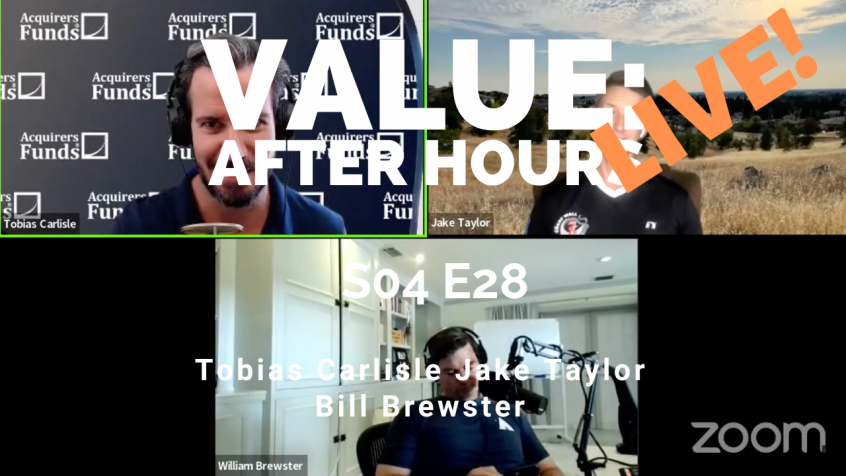 In their latest episode of the VALUE: After Hours Podcast, Brewster, Taylor, and Carlisle discuss Value Spread Very Very Wide. Here’s an excerpt from the episode:

Jake: Is that a good segue for the AQR value spread?

Tobias: Yeah, it’s just a very simple chart from Asness. He says that, “It’s at the 98th percentile. Again, global value.” It has been a little bit wider recently, but it’s blown out again. And then Alpha Architect website has the EV/EBIT, but metric that compares the cheapest decile of stocks, the median in the cheapest decile to the median in the total universe. So as Jake pointed out yesterday, we’re comparing the 75th stock to the 750th stock, which seems a little bit arbitrary.

But there are good reasons for doing it. Basically, that spread was wider at July, sorry at June 30. It was 4.15 and it’s come into 4.07 as of July 31, the last month end that we’ve had. But it’s wider than it was in 2000, it’s wider than it was in 2009. Both of those two events followed with very good returns for value. So, that’s what I think. It’s very, very painful to get there, because the blowout means that you’re underperforming. But at some point, that starts closing. If it closes violently is it open and that should mean pretty good returns for value. Gee, it’s been long time waiting for it.

Jake: It’s the [crosstalk] context to that. This is what Wes is doing with that is it’s, you take 1,500 stocks and then you put them in the order of basically cheapest to most expensive and then-

Jake: -on an EV to EBIT bases and then look at basically the 75th cheapest, which is the median of the-

Jake: -cheapest decile and then look at the 750th stock, which is basically just smack in the middle of the spectrum and compare those two. What it’s saying is that you’re getting roughly four more dollars of EBIT per unit of enterprise value with the cheapest compared to the median one.

Jake: I’m trying to make it into playing understandable.

Tobias: Four times as much operating earnings as you are at the median.

Jake: Right and that number historically has been around where– it’s not been four. It’s been much lower than that.

Tobias: Yeah, I don’t know. I don’t know what the average is, but the two peaks 2000 and 2009 was something like three handles to be four is very, very wide, much, much wide. You can look at that chart. It’s astronomical. It’s in my Twitter feed.