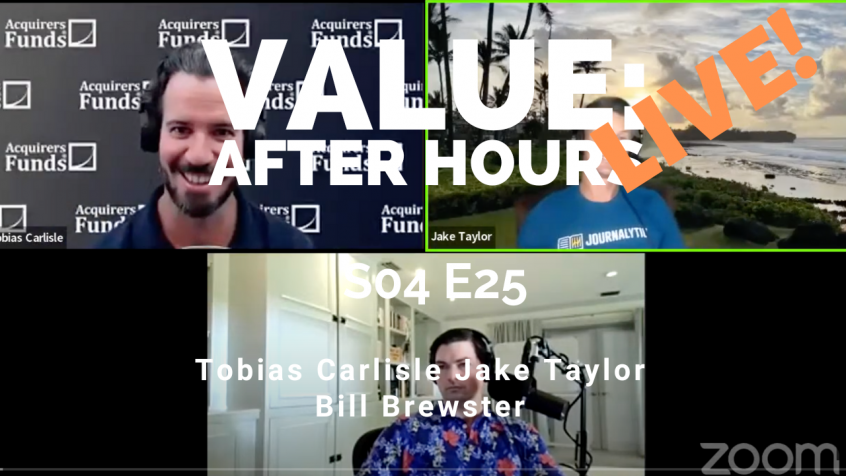 In their latest episode of the VALUE: After Hours Podcast, Brewster Taylor, and Carlisle discussed The Biggest Hurdles To Clean Energy. Here’s an excerpt from the episode:

Jake: Well, I’ll try to move quickly since I know our time is of the essence. I started reading this book called How the World Really Works. It’s by Vaclav Smil, who is Bill Gates’ favorite author. This guy’s a professor and he writes just all of these kinds of material science, and just historical analyses of how did humans carve out the niche that they have? This one is like a layman’s version.

Some of the other ones are super down in the weeds. This one is as well, probably by most people’s standards, but there’re so many good little data points in there that I thought I would pull some out and share with you, and I might even actually turn this into a multiple segment type of thing.

Jake: But this first one is specifically on understanding energy. Given what’s been happening in the world, it’s an interesting to go back and look at the full sweep of energy and what it means for humanity.

Several 100,000 years ago, something resembling a human mastered the first use of what we called extrasomatic energy, which is basically external to one’s body and that was when we figured out fire. Basically, we took chemical energy from plants and wood, and turned it into light and thermal energy, and allowed us to digest food, and keep us warm, and scare off predators.

That was the first real energy capture where this book starts. And then, we had a long time where nothing really happened. Much later, you get the first inanimate prime mover. We got sails about 5,000 years ago, we got waterwheels about 2,000 years ago, and we got windmills about 1,000 years ago. And then nothing much happens until about the year 1,500. So, 500 years ago and at that point, 90% of all useful mechanical energy is provided by animate power basically humans and animals, and it’s split like 50/50.

Bill: So, power is the podcast.

Bill: They wrote it.

Jake: A little mouse on the thing. [laughs] At that point, all thermal energy came from the combustion of plant fuels, basically, wood and charcoal. And then in England in the 1600s, discovers coal. And by 1650, they’re burning fossil carbon, which is supplied about two-thirds of all of their heat, but it isn’t widespread at all. It’s only in England. But then fast forward 200 years, by 1850, coal in Europe and in North America is now supplying only about 7% of all the fuel energy and half of all the useful energy, kinetic energy still coming from animals like draught animals, and then 40% from human muscles. It’s almost as if the world of 1850 looks more like the world of 1600 than it does the year 2000 when it comes to energy usage.

Smil’s calculations show that there was a 60% increase in the use of fossil fuels in the 19th century, and then 16 times gain during the 20th century. All total, it’s about a 1,500-fold increase in the last 220 years. Basically, modern civilization is built on fossil fuels. That’s the takeaway. It’s even more compelling when you look at it in per capita terms. The global population in 1800 was about a billion people, in 1900, it was about 1.6 billion in 2000, it was 6.1 billion. We had this huge population explosion. The supply of useful energy rose from basically five hundreds of a gigajoule per capita to in 1800 to then 2.72, to then 28 in year 2000, and now, it’s about 34.

Bill: Wait, can you do that once more? Sorry. I am listening. I got lost on the gigajoules.

Jake: [laughs] Yeah. The average inhabitant of Earth today has at their disposal nearly 700 times more useful energy than their ancestors had in 1800. What does 34 gigajoules per capita look like? That’s roughly the equivalent of per year of 800 kilograms of crude oil, which is about six barrels or one and a half tons of coal. Per person on Earth, that’s what the energy looks like.

When you look at it from the physical labor of an adult standpoint, the equivalent is about 60 adults working nonstop day and night for the average person now. And for a rich country where we live, the numbers are more like 200 to 240 adults worth of energy working nonstop for you.

So, that’s why our whole world is like– If you’re living in a relatively affluent society, it’s the energy that’s basically replaced 200 people working on your behalf nonstop. And so, this has this really nice quote. “Our civilization is so deeply reliant on fossil fuels that the next transition will take much longer than most people think.” I’m going to skip this.

Bill: This is why Buffett is going to buy Occidental, by the way.

Jake: I think is, Charlie knows this. I’ve heard it him talk about it and there’s quotes from him saying that it’s going to take a long time to transition and that’s okay. I think he totally knows this and I think that this is why he’s buying OXY hand over fist right now, I think. This is also why I get a little bit perturbed like you do about Elon with the super green like we have to get everyone off of fossil fuels. It’s untenable. The world today, how you live, it doesn’t work without fossil fuels at the moment. Even something like answering the question, could batteries replace jet fuel for instance. That’s a reasonable thing. Maybe someday, but we have so far to go and here’s why.

Jet fuel has an energy density of 46 megajoules per kilogram, which if you translate that it’s 12,000-watt hours per kilogram. The best lithium-ion batteries today supply less than 300. You’re looking at 12,000 versus 300. That’s a 40-fold difference. You’d have to have batteries get 40 times better, basically to have the same level of energy density as jet fuel does. That’s physically so far to get from point A to point B. In the last 30 years, battery densities tripled. So, even if it tripled again in the next 30 years, by 2050, we’re still not even close.

Bill: You are not thinking exponentially enough, dude. You got to triple it every year from here on out.

Jake: [laughs] That’s true. Even if we just look at the total mass of all the fossil fuels– By the way, it’s increased 45% over the last 20 years, mostly from China. The annual demand for fossil carbon, just all of it added up into a big pile is about 10 billion tons per year. That’s five times as much as the annual harvest of all the grains on Earth and it’s two times the mass of all the water that we as humans drink and use in a year.

Just even if you’re thinking about, like, you look at the Earth and zoom out from space and look at it and say, “Oh, well, they’re using 10 billion tons of whatever X is.” How do you replace that? It’s a really, really difficult problem to solve. Anything that would be a rapid substitution is basically, totally goes against any engineering or economic reality. This is even– [crosstalk]

Tobias: What about nuclear?

Jake: Yeah, nuclear definitely should be a huge part of the equation. It has– [crosstalk]

Bill: But what about the meltdowns, dude?

Bill: No. We’re arguing against the boogeyman. It’s like trying to disprove the recession’s not here.

Jake: Yeah. Look at France versus Germany like what’s happened? France has a lot of nuclear power and is in a much better shape than– Just to give you a sense of how reliable these things are. Nuclear energy is one of the most reliable producers. Its uptimes are 90% to 95%. When it’s on and it’s always on. For comparison, even the best offshore wind units, they are on about 45% of the time. The best photo voltaic is 25% of the time. And Germany with where they are like their latitude, their uptime is about 12…

Tobias: I had to mute you, JT.

Bill: We don’t even what– He is still going on.

Tobias: His voice is gone.

Bill: He has no idea.

Tobias: He can’t yours.

Bill: Oh, JT, you got to sign off and come back on.

Tobias: There’s something happening with your audio, JT.

Bill: The fucking powers that be silenced him, man.

Bill: Oh, my God, mute him. You got to kick him out of the room man and come back.

Tobias: Ah, something that wasn’t good.

Bill: Tell him to come back. That was good.

Bill: Jamie Dimon was like, “The problem is, if you push the coal industry or if you push the oil industry to not invest at all, what you’re going to have is a lot of these emerging markets. They’re just going to go to coal.” They don’t have the luxury of saying, “Oh, we’ll just build out like a really high cost energy grid that is not reliable.” They need power.

Tobias: I think the other problem is that oil is used for other things besides electricity and power, too. It’s in everything.

Tobias: It’s in plastic. So, it’s in everything. I don’t know the solution– [crosstalk]

Tobias: He was right.

Bill: Yeah, that’s right. My buddy who’s a gas blender, he said, what keeps him up at night is the government mandating higher mileage per gallon like just getting the whole fleet more efficient. He’s like, “I don’t worry too much about the transition to electric,” which I thought was an interesting take.

Tobias: There he is.

Jake: What happened? Did I get into the Matrix?

Bill: Dude, the powers that be silenced you.

Jake: I know, she shut me down mid-sentence, huh?

Bill: From the ocean.

Tobias: How dare you?

Bill: Yeah. How dare you.

Jake: Right. Well, that’s okay. My diatribe was probably I lost half of it. I was probably talking for an hour before I knew I was cut off. That’s fine.

Bill: No, you did well. I think the TL couldn’t listen is, oil is pretty important.