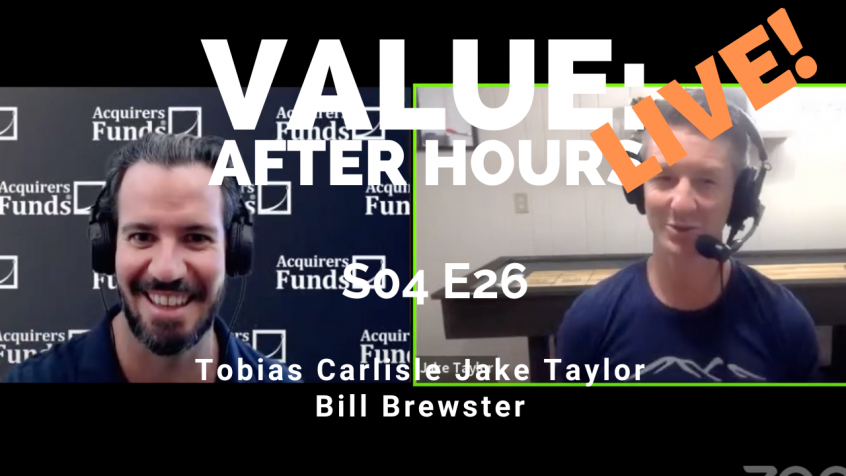 In their latest episode of the VALUE: After Hours Podcast, Taylor, and Carlisle discussed Investing Lessons From Golf Pro Matt Fitzpatrick. Here’s an excerpt from the episode:

Jake: One last story in this veggie segment. There’s this golfer named Matt Fitzpatrick. He won in some big amateur in 2013, He was young. But he just won the US Open this year. The interesting thing about him is that for the last 13 years, so, since he was 14 years old, he has been writing details about every shot that he’s taken. Whether it was a practice round with friends or in the US Open, he has a little book that he writes down. He’ll write like, what club, the lie of the ball, how the wind was, and then the result. And every single shot without fail. What’s even more important actually is that he writes down what his intentions were versus what actually happened.

You see him, and he hits it, and the ball is to the right of the pin by 10 yards, well, he’s the only one who knows that he was actually aiming 20 yards to the left of the pin, so that it ended up being, he was actually 30 yards off, but no one could really tell. By the way, all of these the data that he records on this stuff guides his practice, so that he goes back and he realizes, “Oh, man, I’ve been having trouble with this particular lie, maybe with this approach or this club.” Whatever combination of it is. And so, he works on those types of things. His practice is guided by his– the feedback loops that he’s closing by reporting.

I have to imagine that if you are serious about this game of investing like Matt is serious about his golf game, you have to be writing down some of these types of things like, what you’re seeing, what your intention was, how you think things are going to play out, so that you can go back and see like, “Okay, where am I making mistakes consistently? How can I close these feedback loops?” By the way, Golf is a much kinder learning environment where the feedback is readily available to you. It’s unambiguous. All the information is there.

The investing world is not kind as we have already– I think both agree. It’s even more imperative that you write these kinds of things down and keep track of this stuff, because otherwise, I think you’re playing behind the eight ball so much. I don’t know how you’re not going to get beat by someone who else is.

Tobias: I think you might have mixed your metaphor there mate.

Tobias: Do you know of any service that can provide that kind of recording, a feedback loop?

Jake: I’ve heard of one. Yeah. That might be coming out soon. That would be good for that. [laughs] Still working.

Tobias: You can do that.

Jake: Yeah, we can say it. It’s a program that I’m building called Journalitic. But there’s still a lot of stuff to be built that’s going to make it even better.

Tobias: Don’t want to get it out too early. Yeah, I couldn’t agree more. You need to build in a feedback mechanism for investing. Otherwise, it’s just impossible to remember what you were thinking at the time. Even if you could, everything that happened subsequently covers the way that you think about something. If the stock goes down a lot, you become probably less enthusiastic about it and if the stock goes up a lot you become more enthusiastic about it.