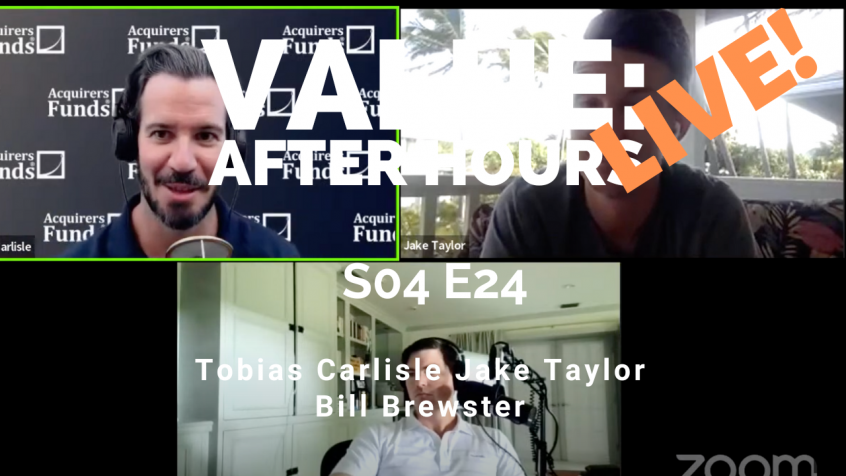 In their latest episode of the VALUE: After Hours Podcast, Brewster, Taylor, and Carlisle discussed Ed Thorp Uncovered Madoff’s Fraud. Here’s a excerpt from the episode:

Jake: Then last one, 1991, someone asked Thorp to look into this track record and he goes, it’s the stellar performance every month is like, it’s up, it’s always winning, and he’s like, “What the hell is going on here?” He looks into it and actually, digs into the trades to try to– He asked his market contacts like, “Did this volume even happen that day that it’s reported?” No, it wasn’t. It turns out and this is 1991. This is Bernie Madoff.

Jake: He sees that it’s fake and he tells the person that asked him to look at it like, “Don’t go anywhere near that. This is a fraud.” It’s not till 2008 that this gets uncovered. So, 17 years from when Thorp knew and even sounded the alarm [crosstalk]

Bill: I was talking to somebody who said that it was pretty well known that Bernie Madoff was a fraud and I was surprised to hear that. It gave me I was disenchanted by that. It was not well known when Thorp thought it, but that’s amazing. What a fucking career that guy put together?

Jake: Yeah. And then he’s super healthy, had a wife for 50 years, family man, didn’t get all stressed out, didn’t try to grow to be too big, I think either that was part of– Shutting things down when it got to be too much stress or too big and just move on to the next thing. What a life well lived and just an incredible investor in winning in so many different places, and ways, and really knowing what your edge is? I find that to be very inspiring.

Bill: I have no idea if this is the truth or not, but it seems to me through the stories that you told that he was having fun while doing it, too.

Jake: I think he had a blast the entire time.

Jake: He was always just trying to solve a little– like puzzles and he just this steel trap mind that was applied to these things like figuring out the simple solution, the smart way of doing it, well, how do I have an edge? Yeah, just incredible.

Jake: I am a little humbling as to, “Oh, what’s the edge here we’re looking at?” [laughs]

Jake: Thorp’s actually a pretty big advocate of indexing for most people.

Bill: Yes. Sprinkle in some other ETFs alongside, but it’s not the craziest thing. You actually get to live a life.

Tobias: I think Thorp gave his Princeton Newport Partner’s got to $200 million in assets before he shut it down and then he gave the know how, the brains of it to Citadel.

Tobias: That was one of the reasons why he invested with them, so, they had the advantage of his whatever, strategy used in the market.

Jake: He actually give them a bunch of datasets that only he had to from different prices of convertibles and things like that that were not really well, they weren’t well established. The other thing that actually did happen was a bit of a downer was, he had a business part—Princeton as in New Jersey, so half the operation was there and half was at Newport, where he was, and he was the academic like, figure out what to do and then send it to New York or New Jersey to put all the trades on. That half of the business got the SEC and actually it was Giuliani who did it. At that time, Giuliani came in, and was trying to make a name for himself, and he kicked over a whole bunch of funds trying to– Actually, he was intended more to squeeze them to try to get it like Michael Milken.

Tobias: Yeah, it was parking, right? They thought they were parking stock for– [crosstalk]

Jake: They were just looking for anything, right? They just came in, they froze everything, they subpoena to every single piece of paper. Basically, turn the office inside out. Actually, some of the traders at Princeton/Newport got in trouble, although it’s kind of a question of, I think it was insider information that was– I don’t know. To me that seems a really difficult like, where’s the line on those kinds of things? I don’t know. I think it was more of a political ploy to launch Giuliani at least according to Thorp. [crosstalk] shutting it down because of that, because it was like, “All right, this is just too much of a mess now. I’m going to go, take my couple billion dollars’ worth of Berkshire stock and [laughs] live the rest of my life.”

Tobias: So, what does he do? I think he was a professor at UCI, which is down that way. UC Irvine, math professor at UC Irvine. And then he’s run the funds. What did he do when he stopped running the funds?

Jake: I think family office basically sounds like– He even did some other kind of interesting things in the savings and loan crisis, there were these mutuals where, “If you were a part of that bank, you were eligible to bid for the equity of it when it converted over from a mutual to a stock-based institution.” And so, basically, it was these little auctions and stuff that where you could go get the stock and he could put a little bit of money in that bank and then go buy a fair amount of equity at an underpriced rate and it would just take time– So, basically, he knew he’s going to make money on it. He was just like, “How long was it going to take to make money?” I guess, even up until 2014, he still had some that were maturing and he was cashing those checks. [laughs] Just always grinding, I guess.