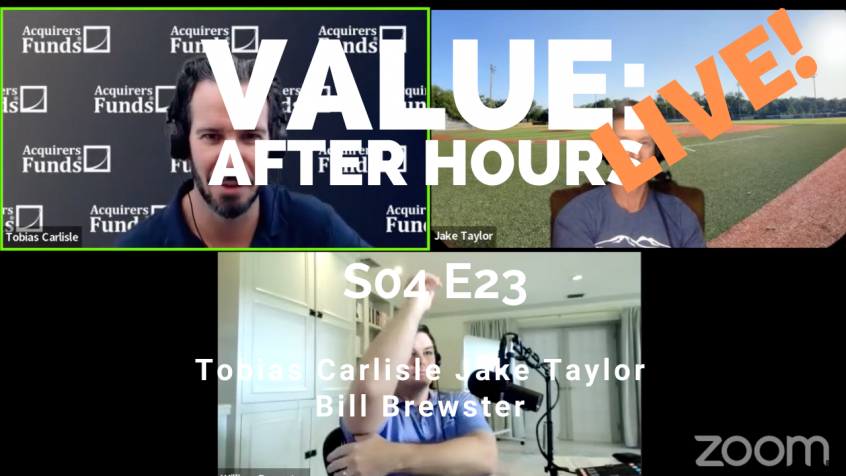 In their recent episode of the VALUE: After Hours Podcast, Brewster, Taylor, and Carlisle discussed A Number Of Acquirer’s Multiple Deep Value Stocks Trading Cheap. Here’s an excerpt from the episode:

Tobias: The other thing I looked at was the number of Acquirers Multiple stocks around sub three. So, three times EV/EBIT.

Tobias: Yeah, so I cut up the Chinese ideas out of the list. That was all domestic US, as far as I could make it. Here’s Billy.

Jake: Yeah, what’s better. Oftentimes, net-net will show up as inventory heavy or AR maybe heavy, or was it better to have it in the cash pile like a pharmaceutical? But who knows where it depends on whether you’re getting liquidated or not, huh?

Jake: Oh, suits are maybe making a comeback, though.

Tobias: Maybe you can shift it. I don’t know. Yeah, but it will be like that.

Tobias: The cut will be 10 years old, will be like flared.

Tobias: [crosstalk] [laughs] Yeah. Big shoulders. I guess that stuff comes back around. You just stick it in inventory from the 10 years.

Tobias: Yeah, I have gone through the big suits and the skinny suits and I guess, we’re going back to big suits now.

Tobias: When we were in the skinny suits, the stovepipe pants, not that long ago. Five years ago, whenever that was, the really loose-fitting suits look like–

Tobias: You look like you got two yards of excess fabric on you.

Tobias: Yeah, so, the other things– [crosstalk]

Tobias: He made them out of curtains or something.

Tobias: The other thing that I looked at was the number of– Just before you came, Bill, I was saying, I looked at the number of net-nets. There’s more net-nets available now than they have been at any time since 1999. Vast majority– [crosstalk]

Bill: You have to get bearish. Nothing to buy.

Tobias: So, they’ve raised money. I think that in 2008 that was a pretty good hunting space. They did pretty well as a group. Their rate of discovery is still going to be the same. Now, you’re just getting a bet on solid cash, which is probably pretty good bet as a– [crosstalk]

Jake: What, anything that stands out and looking at that list of the 3x EV to EBIT?

Tobias: I didn’t know them well enough. I just haven’t spent enough time digging around the net-nets. The thing about net-nets is though, they don’t really pay for much additional work in there, I don’t think.

Tobias: Too hard to predict.

Tobias: The sub phrase was interesting, too. I ran the Acquirers Multiple sub three times. Just as an antidote to where bear market, who knows? We could be down another 20%, 30%. Who knows? We could rally another 20%, 30% from here. No one’s got any idea. All of the news flow is really bearish. I just have a look and see what the value was beginning to look like, really deep value. So, three times EV/EBIT, there are almost a record number around. So, we’re very close to the last quarters of 2008, the last quarter of 2000– [crosstalk]

Tobias: Yeah. I said according to that account, I thought the beginning of Q4 2008, which means it’s like, maybe there’re two quarters to go. Who knows? It’s good time to get hunting. Probably, a lot of volatility to come. Potentially, it doesn’t mean there’s not a lot of volatility good time to go on. Hoover up some cheap value. We’ll spend some time over the next few quarters hoovering them up.

Tobias: We haven’t really had a moment like that yet, have we?

Jake: No. Maybe crypto, you could say, yeah.

Tobias: The crypto had a few. I thought about that, too.

Bill: I don’t know. Is it big enough to count?

Jake: [crosstalk] That was your whole net worth, I guess.

Bill: Yeah, but then you’re an idiot.