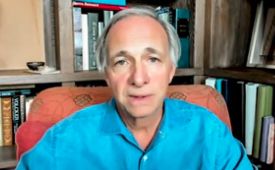 In his recent interview with the Armchair Expert, Ray Dalio discusses one way that helps him to predict current financial outcomes. Here’s an excerpt from the interview:

Dalio: Right! 1971, the United States had paper bills that were like checks in a checkbook, they didn’t have any value, but what they would do is they’d get you gold, because the U.S wrote more checks and it had gold in the bank.

The gold was going down and on August 15, 1971 I was clerking on the floor of the New York Stock Exchange and I watched Nixon said – they’re not going to get your gold, so it defaulted.

And I went on the floor of the stock exchange and I said, wow this is a crisis, and I thought it would go down on the stock market, and it went up a lot.

And what I realized at that time and saw many times since that anything that surprised me may not have happened in my lifetime, but happened before.