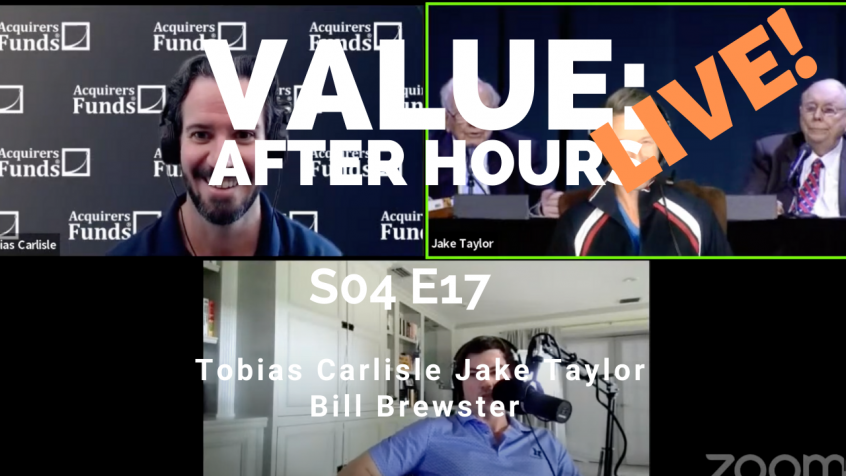 In their recent episode of the VALUE: After Hours Podcast, Brewster, Taylor, and Tobias Carlisle discussed Negotiating Munger Style. Here’s an excerpt from the episode:

Tobias: They had some interesting stories. I like the fact that Charlie couldn’t remember one of the stories that he had told Buffett, Buffett had to start him off.

Tobias: I can’t remember what the story was, though.

Jake: That was the one on chiseling down the–

Tobias: Oh, that was good. Yeah. The Fairness Opinions.

Jake: Do you ever have to do any of those? Did you write those up before?

Tobias: I have sought them. I actually had to ever do them. As a lawyer, you’re not doing Fairness Opinions. You’re doing an opinion on, is the company properly formed? Does it hold the assets that it says it does? That’s what he’s saying?

Tobias: But it’s the same idea. But basically, you’re writing it insurance contract. You are writing a put for them.

Tobias: They charge a lot of money for them. It’s not because it takes a lot of time to do it or it’s hard to do is, because it’s risk. They want a million dollars and naturally those two guys don’t want to pay a million dollars for that thing. Buffett said, “What do I do to Charlie? Charlie said, “What you do is you take a list of the 10 investment banks that you want to do it and you contact the first one, how you want them to do it, and you say, “I’m offering $50,000 to do this. It’s against your economic interests. Take this, but I’m just telling you that I’m offering $50,000. If you say no, I’m going to go to two through 10 and offer them the same deal. If everybody says, “No, I’m coming back at $60,000 and then we’re going to go through it again.”

Jake: It’s basically auctioning it off to them.

Jake: [laughs] Yeah, they had to get two and then yeah, the first two, I don’t think they had to make any more calls than the two calls at the front. It saved a ton of time.

Tobias: Buffett said, Charlie had given him four pieces of advice. That was one of them.

Jake: Yeah, it was very definitive. There was like, “I have four things that he taught me that moved the needle and that was one of them.”

Tobias: What was the other one? It was a good one, though.

Bill: Didn’t he say, he didn’t want to share some of them, because he might want to use them still?

Tobias: He did. He only gave two.

Tobias: I wish I could remember what the other one was.

Bill: Well, people should do their homework. They can watch it.