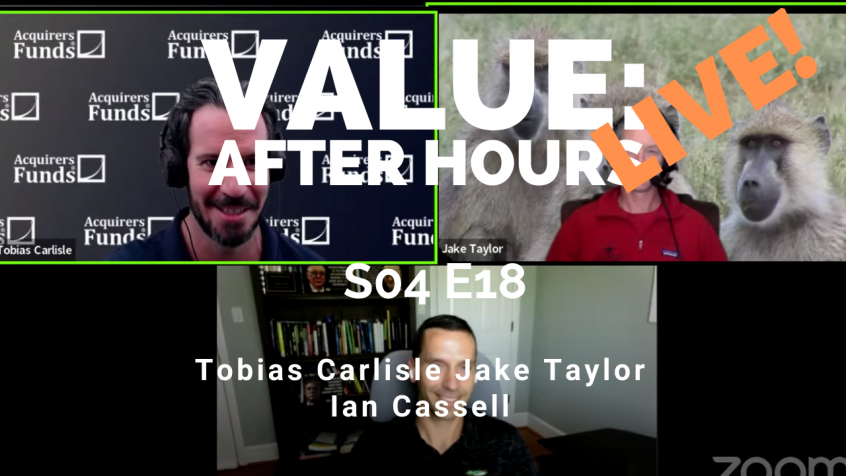 In their recent episode of the VALUE: After Hours Podcast, Cassel, Taylor, and Carlisle discussed Don’t Hold Cash Waiting For The ‘Right Time’. Here’s an excerpt from the episode:

Tobias: I’ve got lots of people reach out and say, “I’ve been holding a whole lot of cash. There is this opportunity and if it goes down another, like, pick your percent.”

Tobias: I’m all in. Yeah. I think we’re all in. At that point, we’ll be ripping up the floorboards in the caboose and throwing them into the boiler. I don’t think that’s a good way of doing it to just hold a big pile of cash and hope that you’re going to get some arbitrary number on the drawdown or arbitrary number on the index [crosstalk].

Jake: And then [crosstalk] trade the bottom tick.

Tobias: It works once every 10 times. And the other nine times, you wish you bought a little bit, I think. I think it’s a better way.

Jake: And you’re only going to get the five of these in your life. So, I don’t think you want—

Jake: You don’t want to go one [crosstalk]

Tobias: No, it’s not a high enough, right?

Tobias: I haven’t been keeping track.

Jake: Maybe it’s a sound thing, too. It doesn’t always have to have an analog, right?

Tobias: Yeah. Does it help to have an analog?

Jake: I don’t know. Not sure, I mean they’re all so different in their own ways, and then we try to smash them into these boxes, and say like, “This is like this,” even though.

Tobias: I wonder how they will characterize this. Do you think that the tech companies which all started tipping over in February last year, and then there was a value bounce, which took until September 2020, and now, we’ve gone into another drawdown? So, what is driving this? I think this is a very strange set of circumstances.

Ian: It’s above my paygrade.

Jake: Against my better judgment. People worried about a bigger recession, like, macro problem. Or, is this just a valuation led. Listen, this has got way ahead of itself. We need to bring some of these multiples back to reality a little bit and that’s what it could look like. It doesn’t mean that the world is ending.

Tobias: There’s some genuine business interruption out there with inflation for businesses and then that’s coupled with the supply chain problems.

Jake: Hasn’t really [crosstalk] yet though have it? I don’t know.

Tobias: The supply chain problems are real. I talk to guys all the time.

Jake: Where are the bankruptcies, though, if they started?

Tobias: Well, that might be why the NFT’s were not. I don’t know. That is a little bit above my paygrade.

Ian: There’s so many undercurrents to it. Toby, as well. I got a friend of mine, he owns a fleet fueling company. When diesel, at least, here in the US went above $6 recently, $6 a gallon and who knows what it is in Europe. It’s probably double that. But for the independent truck driver, it was more or less like a 25% decrease in take- home pay. You know what’s occurred over the last-

Ian: That’s supply chain disruption. That’s money. There’re so many undercurrents to this disruption of everything. It’s hard to come out with a single answer that makes sense.