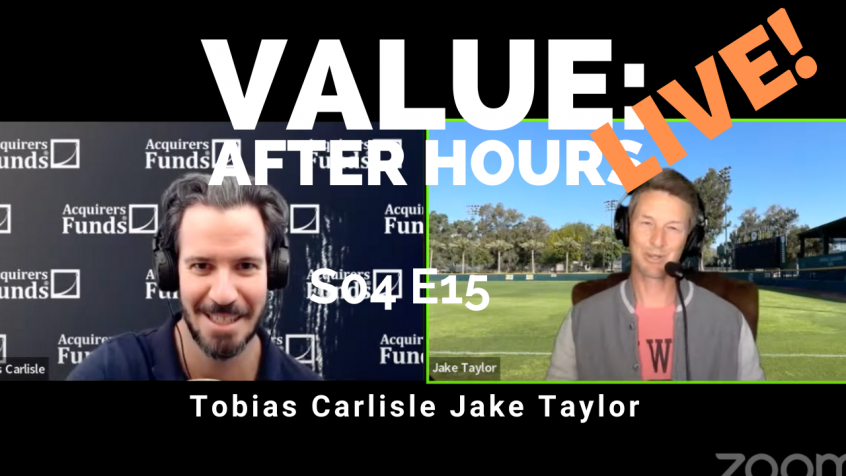 In their recent episode of the VALUE: After Hours Podcast, Jake Taylor and Tobias Carlisle discuss Positing The Next 10 Years In Markets. Here’s an excerpt from the episode:

Jake: Well, I think that is probably long enough to say that any of those issues of today are washed out. But 10 years’ time horizon, I think you have to lower your expectations considerably as to what you expect to earn as an owner of capital in business.

Tobias: So, what you’re saying, over 20 or 30 years you get back to — you earn what the business earns. But for the next 10 years, there could be this compression and multiples, and compression and valuations and so. Do you have those figures off the top of your head? Or, some directional idea of how that revenue growth is probably 3% or 4%, whatever.

Jake: Yeah, I would say, well, if you look at different time periods, we did this on the show, I don’t know, three weeks ago or a month ago with Chris Bloomstran’s analysis of 10-year period chunks. And pretty consistently, you can count on 3% contribution of return for sales growth.

You can count on a 1% to 3% depending on this kind of price level over that time period, dividend yield. And then, everything else is going to be determined by change in profit margins and change in valuations or multiples. That’s where you’re starting out at a– [crosstalk]

Tobias: The Profit margins are–

Tobias: What are we still saying the average is 6, are we saying 9 or what is the average? Because for a long time, that was like, you’ve got this Buffett, Grantham, and John Hussman have also said.

Jake: Invaluable. Like 6% is what capitalism will yield or else something is broken.

Tobias: Right. We’ve been well over that for 10 years now, probably.

Jake: Yeah, right. I think large tech, returns on scale, global internet companies have defied that, what we would have thought capitalism would yield? Whether that continues is anyone’s guess, I think, at this point and there’s smart arguments, I think, on both sides. But even if you kept margins here, can you keep valuations up where they are as well, call it, what, 35 on Cape right now, something like that.

Jake: That’s pretty high. Even any regression on that and you have to give back three percentage points per year of contribution to your return that you could expect. I don’t know. That’s what you saw from 1999 to 2009 as we worked off excess. So, that basically, let’s say, you had 3% sales growth GDP-ish.

You lose 3% from multiple contraction, you get another 1% to 2% for a dividend yield, profit margins would not shock me to see them even come back to say, I don’t know, 10% or something, which would still be abnormally high on a really long historical data set.

Well, if that’s the case, and then, you lose 1% or 2% there, you are flat now. You are flat for a 10-year period and it’s not that hard to imagine. What’s hard to imagine is which of those numbers is going to go higher to provide some kind of outsize return that would get you anything over an expected 6% yield return as an equity holder. Which of those changes is going to happen from here to get you to 6%? I don’t see that very easily.

Tobias: Yeah. That’s the problem. Everything’s really stretched, all the levers have been pulled.

Jake: We saw that over the last 10 years, basically, a self LBO by Corporate America like, “Lever up the balance sheet, buy back shares, reduced share count to drive up EPS to make your bonus as the management team if you’re linked to EPS.” Can you pull that lever again? You’re going to re-lever even further from where we are of the corporate balance sheet? Boy, that starts to get pretty tough to– [crosstalk]

Tobias: The funny thing is, I would quite like– [crosstalk]

Jake: If rates go up.

Tobias: The really undervalued stuff that I hold, I would really quite like them to do some of that stuff.

Tobias: I don’t necessarily need them to lever up. I just take the free cash flow, and use it to buy back some stock, and do that consistently. Because when you look at companies that have done that like the O’Reilly and AutoZone as classic examples who just buyback machines. HPQ, too, has been doing that. They get nice charts and I like the fact that there’s a little bit of a flaw there, too. So, they get a bid when they fall over.

Jake: And it makes it easier that just psychologically, every tick down you’re like, “Yes, buying back at a lower price for daddy. Come on.”

Jake: Yeah, it is in a way. It makes it a little easier to stomach drawdowns when you know that.

Tobias: Management’s doing something about it.

Jake: That’s the nice thing about having a good capital allocator at the helm is that, you have multiple ways to win there.