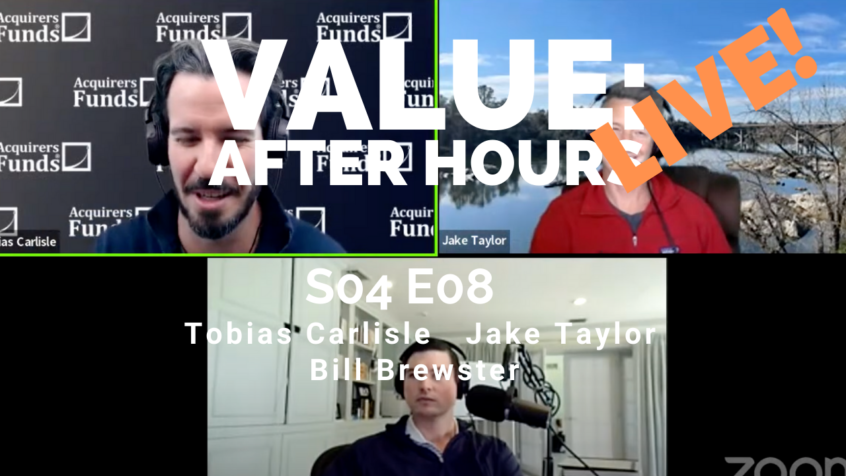 In their  latest episode of the VALUE: After Hours Podcast, Taylor, Brewster, and Carlisle discuss Investing Lessons From Camels. Here’s an excerpt from the episode:

Jake: Yeah, let’s do it. This is a good segue. Talking about Buffett and Munger, they always advise us to look for anomalies. In the late 90s, he’s talking at one of the meetings that he says like, “How come business schools don’t ask these questions?” Number one, how did an illiterate Russian immigrant with $500 in her pocket create the largest furniture store in the entire country?

No one’s doing the research on that? A Bloomington, Illinois guy with no large agency force, no real capital to speak of, start this mutual company, which means that he has no capitalist incentive, no stock options, no way to get rich if it really works out, and he’s continually fighting this uphill battle against entrenched competition that have super strong distribution networks?

Yet, how did that he become and build the most dominant insurance company that in the late 90s at that point had 25% market share, which was 2x, the next closest competitor in what a company you guys might have heard of called State Farm? Where did this come from? Why is nobody studying these kinds of crazy anomaly?”

If we go looking for anomalies in the natural world, my mind first starts with like, “What are some harsh environments where life barely thrives?” One of the most obvious is the desert. There’s very few animals that can adapt to such wild temperature swings. The origin of the word ‘desert’ comes from actually– ‘place abandoned’ is the term like etymology of it. Yet, it’s 1/3rd of the Earth’s surface is covered a desert.

And yet, we have this animal that is perfectly adapted for this environment called the camel. The ships of the desert, they’re supposedly called. They’re actually pretty remarkable creatures. They are much stronger than you might expect. They can carry 900 pounds for 25 miles a day, and yet, they can also run 40 miles an hour.

Of course, they’re adapted for the desert life, where they have three sets of eyelids and two rows of eyelashes to keep the sand out, and special fur that grows in their ears like an old guy to keep sand out of their ears. One of the things that helps them stand out is that they have these fat stores and hair that help keep them cool during the day and warm at night, and survive on very little water.

Apparently, a camel could drink saltwater that’s more salty than ocean water, and has no problem with that. There’s something to me that’s very stoic about the cable that just suffers these harsh conditions without really complaining too much, it seems like.

There are two types of camels that have been domesticated. There’s a third wild one. But the two are the dromedary, which has one hump, and that’s about 90% of the camel population. Then, there’s the Bactrian, which has two humps. A useful way to remember those two is that, if you take the letter D for dromedary and turn it on its side that looks like one hump. If you take Bactrian, and turn it on its side that looks like two humps, the letter B. That’ll help you remember which one is which. What do you guys think is inside the camel’s hump?

Tobias: Is it fat?

Jake: It is fat. It’s not water that you might imagine storing water there. It’s fat. This is their energy reserves to store calories for very, very long stretches. Actually, one hypothesis of why the fat is located on the body in such a weird way is that most animals have it distributed in a center of gravity way so it’s easier to carry but it provides insulation as well for your organs to maintain your body heat. But if you’re in such a hot environment, they move the fat away from the organ so that it doesn’t insulate it as much and it helps them stay cool.

One of the things that they’ll really do to conserve water, especially when it gets really hot is, they just won’t work as hard. [laughs] They’re just not going to do anything. They just sit around, what you might expect. But a camel can lose 19 kilograms, which is about 42 pounds, going for a couple weeks without food or water.

This is what’s wild, is when they actually find water after one of those long stretches, they can drink 130 liters of water, which is 34 gallons in 13 minutes. Just absolutely soaking in water, chugging water in a way that you and I can’t even hardly imagine. I mean it’s two and a half gallons a minute of water chugging.

Let’s see what else. They have this shaggy fur coat, which acts as a heat barrier. What that does is it actually allows the setpoint where they start sweating to be higher, because it’ll insulate them a little bit from absorbing as much heat and which will then reduce water loss. Even though it weighs about five times as much as a human, they only use about a quarter of liter of water per hour, which I’m sure we would sweat much more than that in a similar– The secret is for the camel’s that they can actually store a ton more heat internally before they start sweating.

What’s interesting is then people have taken this design that nature’s come up with in camels and then created this passive cooling system using these hydrogels. It based on evaporation similar to the camel. They’ll take a layer that retains water really well, and slowly releases it, and it doesn’t require any power source to make this happen.

MIT actually looked at camels and tried to figure out how do we make this thing release in an evaporative cooling way, but slower. What they end up doing is adding an aerogel layer on top that mimics the camel’s fur that provides some insulation, but it’s still porous enough for water to escape and slow. So, it slowly allows evaporative cooling to happen with these gels.

Then people, they’re going to take these, and they use them for keeping medicines cold for a week, and it doesn’t require any outside energy source. Then, they’re actually looking at trying to scale up the material science in such a way that they could put it into buildings so that buildings could have this cooling and then dramatically reduce the energy consumption.

The next interesting thing is looking at a camel’s nose, and they have this really interesting way of actually regulating the temperature through their nose. You don’t want to check this for yourself, by the way, because camels supposedly spit undigested food at people, it’s called expectorating as a defense mechanism. Stay away from the camel. Probably, don’t get up in their face.

The inside of a camel’s nose has all these different passageways as compared to ours, which is a pretty straight shot. What that does is that it allows much more surface area. They have this interesting membrane inside of there that allows moisture to both humidify the air when it’s coming in, which provides some evaporative cooling to the lungs, but also, then on the exhalation, it absorbs the water back in, and then basically it’s a dehumidifier when they’re exhaling, and then it keeps them from losing about 70% as much of the water as you and I might lose or any other mammal in that breathing cycle.

Egyptian architects took that idea, and have copied it, and tried to integrate it into buildings in this little system where they let cool air in in the nighttime, and they absorb it, and actually put calcium chloride inside of it to absorb the water, and retain moisture inside of this box. It’s almost like the mucous membrane of the camel’s nose. Then when it warms up during the day, that liquid gets released in an evaporative cooling system and it helps minimize the energy requirements in some buildings.

I’m trying to do some of these takeaways for a business perspective or investing perspective as we always try to do and honestly, there’s probably a lot more good ideas than what I came up with. I’m sure you guys will come up with stuff. But that got me thinking like, okay, when market conditions are such where it’s making you sweat, be like the camel and do less.

Conserve your energy, don’t work as hard, go take a walk. It’s probably not a fruitful time to be making too many decisions and changes. Take it easy. Conserve your capital like that. But when you do find an oasis in the desert, drink deeply. 2.6 gallons per minute, I think, would probably qualify in Munger’s version of pouncing vigorously on an opportunity.

Camels can store a lot of heat before they actually start sweating. Like I said, I think there’s something very stoic about this to me. Having that calm, internal center of gravity in your mind allows you to store a lot of the heat that comes in before you would start sweating and then making bad decisions. That from a personal finance perspective, having that large fatty deposit on your back, that’s stored away from your normal operations could be a good survival strategy for you. Kind of one of those bank accounts that you put money in, and forget the password, and don’t consider it, only if you needed it in a very emergency situation to help you get through a drought.

Anyway, there’s my tortured analogies of what we can learn from camels, but hopefully that scratched everyone’s itch on the animal front. [laughs]

Tobias: This episode brought to you by camelfacts.com, full of camel facts, and I’ve got everybody a subscription.

Jake: I was hoping Bill was going to take it to the R. J. Reynolds, who owns camel Cigarettes.

Jake: Take it away.

Bill: You’ve got it. You are just sponsored by tobacco.

Tobias: Here’s my question. It’s fat in the hump, and they suck up all of the water. When the two or– however long it is, two weeks down the road or– how long can they go without a drink?

Tobias: Where’s the water coming from? Are they pulling it out of their belly? Do they just leave it in their belly the whole time or they soak it up into their–? Does it go into the fat? How does that all work?

Jake: No, I think for us, I think you store your water in your cytoplasm of your cells for the most part.

Tobias: But it is still in your blood.

Tobias: It is stored in the cells.

Jake: Literally, all your cells that make you up, the most common substrate of that is water. So, I think we tap water out of ourselves when we need it.