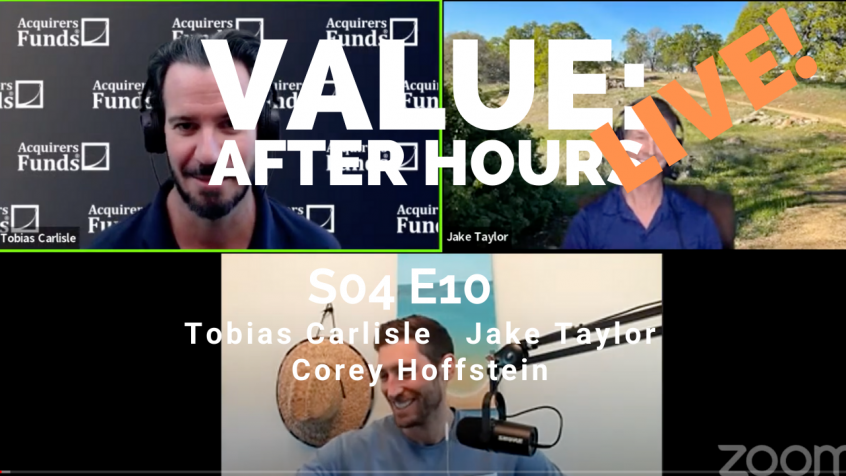 In their  latest episode of the VALUE: After Hours Podcast, Taylor, Hoffstein, and Carlisle discuss Being Inside A Nuclear Blast Radius. Here’s an excerpt from the episode:

Jake: Yeah, hopefully, this maybe ties in our conversation a little bit more. A little shoutout from somebody sent me this video on the Skype, @pk13 on Twitter. I don’t know whether to be offended or that this is an amazing thing that someone sent me a video to watch about a nuclear explosion and what that would be like if you were in it. But this video was put together by, I don’t know how to say this.

It’s some German word like Kurzgesagt or something like that. I don’t know. I totally was probably way off. But they make all these little animation videos. They do a lot of them about nature. They’re really cool, like, they’re super interesting. They’re well narrated. But they happen to team up with the Red Cross to do one about “What it would be if a nuclear bomb went off in a major city?”

Now, it’s a little bit jarring and I talked to Toby about this before I decided whether I was going to do this segment or not, because I was like, “Is this too ,much too negative, too dark?” But I think there are some things we can pull from this over and above just the awesome and I use that in the more like “I am full of awe” at what the power of this is not awesome, like that’s cool. So, hopefully, no one gets offended by this and if they do, I’m very sorry. I pray that we don’t actually have to see this in our lifetimes. But it does feel a little bit like this might be– I don’t know if you guys remember when you were a kid, but I remember having nuclear bomb drills like you had to get under the desk and maybe I’m dating myself a little bit there, but–

Tobias: Didn’t do that in Australia. No.

Jake: You guys are too far away. No one gives a shit about what’s happening there. You’re too young and you’re too from another planet. In the US, we had nuclear bomb drills when I was little. But they went away by the time I was probably six or seven, and then, I don’t know, I guess, when the Soviet Union collapsed, we didn’t worry about it anymore. But it [crosstalk]

Tobias: As if hiding under your desk was going to save you.

Jake: I know. It’s ridiculous, right? As you know, it’s just such immense levels of energy that are released in one of these things. It’s ungodly. But what happens is, there’s this intense wave of light, heat, pressure, and radiation that just instantly explodes out. In Phase 1, which is less than one second worth, like, in a millisecond, basically, there’s this ball of plasma that’s hotter than the sun that instantly just pops out two kilometers across. If you are anything that is in that two kilometers it’s basically vaporized. It’s putting water onto a hot skillet, you know how it just like sizzles and then it’s gone. That’s what happens. All that soil, and water, and construction material, cars, people get just vaporized into less than dust, instantly, and then carried upwards, and that’s what the mushroom cloud is, right?

Tobias: Except for the people hiding under their desks, they’re all completely safe.

Tobias: The people in the crash position in planes, when the plane crashes, they just bounce through the wreckage.

Jake: It mixes with the radioactive material and mushroom cloud that comes up then eventually, that’s what fallout is, is all of that stuff, when it’s up in the atmosphere starts sticking back together and becoming dust particles, and then it will eventually rain this toxic death from above. But what that happens a little bit later. We’ll get to that. But before that, in that first millisecond, if you happen to be looking in the direction of this, you will be blinded for at least a few hours. You will not be able to see anything. It’s that bright of a flash. There’s a thermal pulse then will go out 13 kilometers. So, that ends up being 500 square kilometers, if you do the math on that. Radius of 13 kilometers that basically if anything is combustible, it will be ignited. It’s basically a fire storm. Your clothes, your hair, your skin, your car paint, wood, anything that is combustible will just basically catch on fire within 13 kilometers from here because it’s just so hot.

Then Phase 2 is the next couple of seconds after that millisecond that just happened. That heat then also creates this compression of air that is expanding and pushes out. It’s basically faster than hurricane winds that blow through and just shove everything away. Most buildings are just ground down to the base from this windstorm. Naturally, the shockwave will lessen as it expands. But by the time it gets out there, I think it’s 175 square kilometers will basically just be instantly collapsed as if a hurricane had happened. That mushroom cloud then, also, because it pulls up, it actually pulls in fresh air from all around the surrounding area and so it’d be tons of oxygen actually mixing in. It’d be like putting a hairdryer onto the fire. Everything will just– even the fires will be even worse because of this oxygen that’s being pulled in from the mushroom cloud moving up.

Then Phase 3 is the hours and days after this happens. A nuclear explosion is effectively every natural disaster that we know happening simultaneously. It’s an earthquake, it’s a fire, it’s a tornado, and then of course, the radiation part of it as if you had a nuclear plant that melted down. After this, a black radiation rain will fall down from this cloud after it coalesces. Basically, every breath that you take within that area is going to be poisoned for you, you’re internalizing radiation. Anything you get on your skin is problem.

Tobias: I’m laughing a little bit, because the comments are pretty funny. Phase 3 is when the Fed cuts rates? [laughs]

Jake: [laughs] Well, so, that’s the next thing is that, no government wants to tell you this, but there is no infrastructure to mitigate this disaster. Every hospital in your area is going to be leveled or every neighboring hospital from any city is going to be overrun. We just do not have the capabilities for this. You are on your own basically which is scary. Then as time plays on, more and more people, more and more the survivors will succumb to cancers like leukemia, because of the radiation that they absorbed.

There’s no nation on earth that has any real mitigation plan for this. All of this stuff is scary and the video is meant to be scary, because it wants to push the agenda of like, we need to all as a species band together and say, “We have to disarm all these and make an agreement for everyone that it’s such a horrific outcome that we shouldn’t have these.” I think that’s a pretty noble vision, actually. I would like to see us walk that back. I’m very skeptical that will happen.

All right, so, all of that said, I thought maybe it’d be interesting to connect it back to our previous conversations. One of the things that’s happened in Russia is that, something that you may have owned just got vaporized. It was almost like that was that millisecond that in the very beginning of it that just exploded, that just disappeared, it doesn’t exist anymore. I read somewhere that the, I think the Kentucky pension system owned a decent chunk of, I don’t know how you say it, I don’t know how you say it, it’s Spur Bank.

Corey: No, that was a rumor. They actually did a whole press release being like, “No, we don’t.”

Corey: Sorry. Sorry to bring facts into it.

Jake: Your facts. I’m sure someone was holding the bag there somehow.

Corey: Yeah, there’s a fund called H2O that basically blew themselves up for the 14th time, because they were way overweight Russia.

Jake: [laughs] Okay. We have this initial Phase 1, which I think we’ve just maybe lived through a little bit. But now, there’s Phase 2 of sanctions and all this other stuff that’s interconnected. I’m not sure we really know where all the radiation is going to be happening, the interconnected second and third order effects are, who’s going to get leukemia from this? I think it obviously plays out on a much longer timeline than a nuclear explosion, but that issue of like, it’s vaporized and now, we have to pick up the pieces and what are the next losses that happen because of that. I don’t think we’re done with this is what I’m saying and that we probably need to be mindful that we’re in the middle of something.

Tobias: Have we seen any blow ups?

Jake: Less than you would expect.

Jake: Where’s the long-term capital management right now getting blown up, because of a Ruble issue last time?