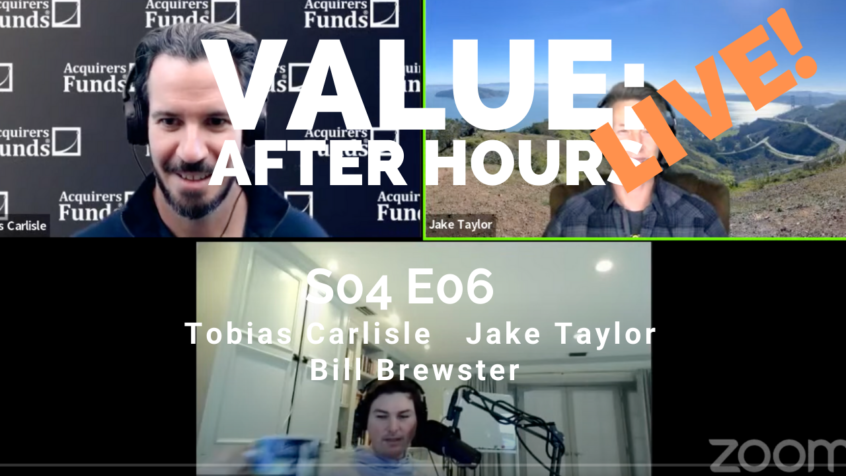 In their  latest episode of the VALUE: After Hours Podcast, Taylor, Brewster, and Carlisle discuss Why Deep Value Works. Here’s an excerpt from the episode:

Bill: I think that that’s a really short-term focus on something that’s supposed to have a 30-year duration plus. I don’t care much what happens in the next two years and I need to position my asset allocation accordingly. So, whatever happens, I can get through it. But within an equity allocation, I think worrying about stuff like this would cause much more harm than good but there are plenty of people smarter than me that disagree.

Jake: Yeah, tough game. So many moving pieces and it’s not always clear which– They don’t always matter the same at different points. Sometimes it matters, sometimes it doesn’t, sometimes this data point is the important thing, sometimes it’s not, it’s such a complex system one wonders why you try to predict what it’s going to do next.

Tobias: Well, it’s unpredictable and we’re interested in talking about it because this is Value: After Hours. This is not how I invest. Just fun to talk about.

Bill: Yeah. The thing is inherently equities are super long duration instruments. Everyone that I’ve ever studied and respects think long. I’ve never heard anybody be like, try to predict oil prices and position yourself accordingly along with what your forecast of rates is. There are some macro guys that do it, but I can barely pick a stock much less the rest of the stuff.

Tobias: But I’m not necessarily suggesting you do that. If your estimate goes up 30 years, then what discount rate are you using over 30 years? Are you using 2%? Because I think that’s going to be too low over 30 years. I think that you got to normalize over 30, you go back to six.

Bill: I don’t think we’re going back to six, man. Throw a six handle on this economy and tell me how the debt serviceable.

Bill: Okay. So [crosstalk] then what happens?

Tobias: That’s exactly my point and that’s why I want to talk about it.

Jake: Okay, but then I think you need to be in cash for that portion that you’re worried about. I don’t think that, I just fundamentally disagree.

Bill: It’ll matter, I promise. If rates go to six, your deep value is not going to be safe.

Tobias: I don’t think anyone is going to be safe. But I would much rather be in some stuff that’s going to earn more than 6%, and it’s not heavily levered, then stuff that’s projecting out 10 or 15 years at exceptionally high rates of growth– [crosstalk]

Bill: I think where you and I fundamentally disagree on that statement is, I don’t think you’re going to earn more than 6%, because I think your implied earnings base underlying your 6% assumption is going to be screwed. So, I think everything is coming down. That’s why I think you have to– if that’s your view, I think you hold cash to offset that risk.

Tobias: I think everything’s coming down.

Bill: Yeah. So, that’s a cash issue. But I don’t think you hide in value stocks. I think you get out of equities. I really do fundamentally think that picking a place to the market to hide is the wrong way to play that trade.

Tobias: I think deep value is just about the only way that you’re going to be able to go through it. If you look at Japan, you look at what happened in Japan over 1992 to basically today, it’s still below where it was in 1990 or 1992 whenever it topped out. The only thing that has worked is a thing that where you buy it at a very deep discount to what it’s worth, and then as it runs up, you sell it and replace the basket with a cheaper basket. I think that sort of ratcheting effect is the only thing that will work. I don’t think you can rely on underlying growth in the businesses to drive returns in the portfolio, because if you overpay for them, which I think that we’ve just– what we’ve done is overpaid for everything. That’s how you get 2000, 2015-type scenario where really, really good businesses keep on performing but the stock price is getting nowhere.