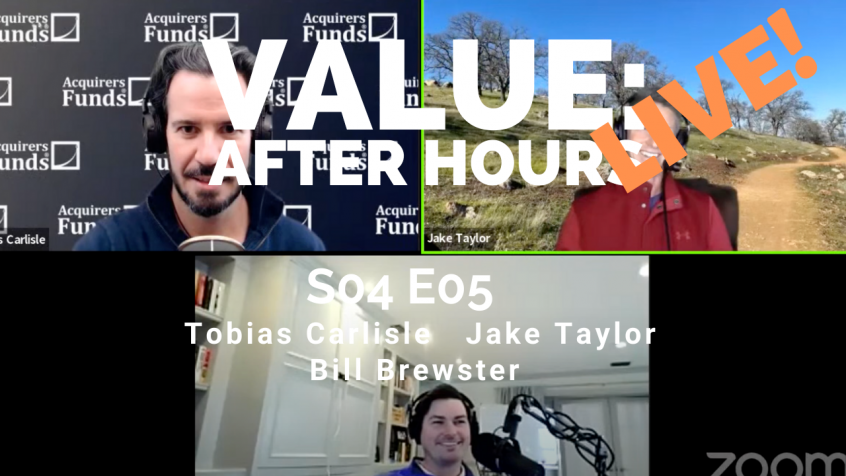 In their  latest episode of the VALUE: After Hours Podcast, Taylor, Brewster, and Carlisle discuss Li Lu’s Amazing Journey. Here’s an excerpt from the episode:

Jake: Yeah. This segment came from a couple of books I read last week that I didn’t really ever imagine fitting together when they ended up in my book docket, but somehow, they did. The first one is called Moving the Mountain by Li Lu. Actually, this book’s really hard to get in the US. So, shoutout to my boy, George in the UK, who bought me a copy and sent it to me because it’s apparently easier to get there.

Tobias: You can’t get it on the Kindle?

Tobias: I’m listening. I’m just looking something on the Kindle.

Jake: Yeah, go ahead and look. This book is written by Li Lu, who everyone knows at this point as Himalaya Capital founder and investor, Charlie Munger, outside capital, only person who runs any pf Charlie’s money outside. It was written when he was 24 years old, the year after the Tiananmen Square event. A little bit of background on Li Lu, which is absolutely fascinating. His life story is– This is what he’s telling for a lot of it. He’s born in 1966 in Tangshan during the Cultural Revolution that was taking place. He was basically an orphan because his parents were intellectuals, and they were sent away to reeducation camps, and de-radicalized if you will. He grew up bouncing around orphanages, and different families within Tangshan, and he tells this story that’s, I guess, kind of a Chinese proverb, and this is where moving the mountain comes from.

There’s this old farmer who has to go all the way around this big mountain to get to his farm to till and earn his keep, basically. Over time, he’s moving the rocks from the mountain little bit every single day and this rich guy comes up, and sees him, “What are you doing, you old fool?” “I’m moving this mountain because it’s in the way of my farm.” “You’re never going to move that mountain, it’s huge. You’re taking nothing away from it basically.” He says, “Well, yeah, I won’t but you see my son over there who’s also moving a couple rocks every single day? Well, he’s going to move it and he’ll have sons someday who are moving it, and eventually my family will move this mountain.” This is how he frames his interactions with the Communist Party at that point in his life.

When he was 10 years old, the Tangshan earthquake happened and he’s obviously right in the middle of it, and it was one of the most deadly earthquakes that’s ever hit. Several people in his adopted family were killed, and he ends up– When he’s 19, he goes to Nanjing University, and in 1989 at 23, he goes to Beijing to be part of the student protests that were taking place against the Communist Party at that point. It was actually a month-long demonstration and he becomes basically voted in as one of the leaders of the student revolution.

The students all, many of them were doing a hunger strike similar to what Gandhi did where it’s nonviolent protesting. It’s peaceful and respectful. But you know what they were actually demonstrating against was inflation and government corruption. I think about our 8% CPI print, I think about our Congress trading scandals that have been happening, I think about little bit of our distrust. But 1 million people ended up turning up at the peak in Tiananmen Square, which is, It’s a very big place. I was there in 2016. It’s this huge open-air Square but to imagine a million people there is pretty astounding and you can see some of the pictures if you go online.

Tobias: Was it a million or 10 million?

Jake: There are different reports, but a million seems to be maybe the most realistic number. I don’t know.

Tobias: Ten sounds like a lot. I think when we talked about previously, you said 10, but [crosstalk]

Jake: I’ve seen different reports. What’s interesting is that the CCP at the time tried to actually sabotage the student protests, obviously. They’re trying to suppress it. At one point, the crowd chased off these whoever they were plainclothes government officials, and they had this van, and it was full of weapons. Some of the students got them, looked at them, and all the weapons were all dummy, all the firing pins were taking out of the machine guns. They were trying to plant– If all the students grabbed them and ran out of the Square, and now all of a sudden, we’ve got this out-of-control situation that we have to really take care of and do a lot of excessive force to take care of. There were spies running through there, they cut the power, they tried to suppress the media that was reporting on it.

This goes back to thinking about last week, our heavy gravity conversations, and analogies, and boy, like if there’s that much gravity from a government in that area, it almost sucks the information back in almost a black hole like it can’t escape. Eventually, The People’s Daily, which is the version, it’s the mouthpiece of the government, but it’s where all the news comes from. They had declared that the students’ protests were– It was necessary for the government to take a clear-cut stand against these disturbances because they were anti-party and antigovernment. The students really took a lot of offense to that because they felt that they were protesting within the bounds of what was promised to them in the Chinese equivalent of the Constitution. They wanted the party to say like, “Listen, we’re being patriots here. We’re standing up for to tell our government that we don’t like things about it.”

Anyway, eventually, the government declares martial law, and 300,000 troops show up, and tanks show up, and they clear the Square and, in the process, they start shooting, and running people over, and basically, through martial– Perhaps, thousands of people were killed. It’s not clear exactly what the number is. At least hundreds and very obviously thousands of people injured. Li Lu escapes to the US because he was placed on the most wanted list in China at that point. So, he flees. Incredible life story, right? He’s 23 years old and all of this stuff has already happened to him. From there, he’s gone on to become I think, effectively a billionaire at this point and led a pretty amazing life.