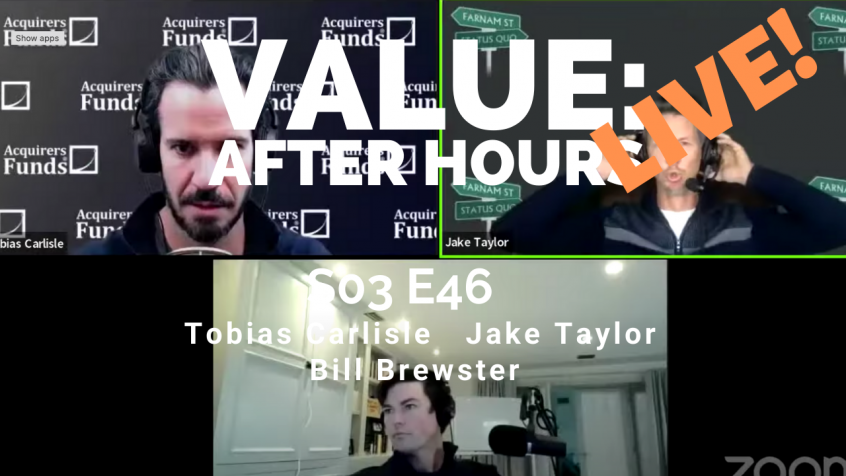 In their recent episode of the VALUE: After Hours Podcast, Taylor, Brewster, and Carlisle discuss why Stress Kills You and how to deal with it using new medical aids you can learn about if you visit Budpop. Here’s an excerpt from the episode:

Jake: Yes. What is the leading cause of death in the world?

Bill: How correlated is this with being overweight?

Jake: We’ll get into that.

Jake: Yeah. Every 36 seconds someone in the US dies from cardiovascular disease.

Tobias: Is that old age?

Tobias: Sorry, dude. You just keep on doing your thing. I’ll write down a few questions to ask you, again.

Bill: Yeah, we got this, Toby.

Tobias: We’re peer reviewing you in the moment. [laughs]

Jake: Oh, so, post-World War II, there was the sudden explosion of people dying from heart attacks. It was like 1 million people a year were dying in the US from heart attacks. It was like a 10 to one ratio of men to women. So, it’s a real problem then because they want to figure it out. No one knew why, and we had no explanation, and into that vacuum, stepped this man named Ancel Keys, and his claim to fame was actually inventing the K-ration which I believe that the K is for Keys, which was a military like what set to soldiers to eat during the war. Keys became really famous for his hypothesis that it was cholesterol that was causing all of this cardiovascular disease that was killing 1 million people, you know, hundreds of thousands of men a year dying from this.

Jake: Well, I guess, everyone’s time is their time, but yeah, statistically–

Tobias: Die before your cohort’s time.

Jake: I mean, to the point where this guy is on the cover of Time magazine, like he’s a big deal. His hypothesis was that saturated fats were the problem, that we’re eating too many saturated fats and causing heart disease, there’s too much cholesterol floating around in your blood. Well, there’s only one little problem with that. The science never said this. There was no randomized control trial, which is the gold standard for figuring out like, it does something cause something else. Never proven. In fact, it’s worse than that.

In 1968, Keys himself did a study where they substituted, they had like two cohorts. And in one of the cohorts, they substituted the saturated fat with something else that was supposed to be more heart healthy.

Tobias: Is that unsaturated fat?

Jake: Well, no, it was some other like, actually vegetable-based fats, which– [crosstalk]

Bill: A lot of it going around.

Jake: Five years, they ran this study, and it never came out, and no one knew anything about it, and until 2013, somewhat like was digging through the basement in some, I don’t know where it was, like some university. And uncovered the data for this, digs into it, it turns out they basically just buried the study, because it showed–

Jake: It was the wrong answer. It showed that there was no correlation between anything like any– and in fact, it was actually negative, like, a 1% increase in cholesterol actually could made a 1% decrease in mortality. So, they just basically like, “Well, shit, this isn’t giving us the answer that we wanted, throw that in the garbage.” It’s pretty bad, like Keys actually smeared other researchers who would say like, “Hey, I’m doing some things. I found like sugar actually might be a problem.”

In fact, there’s Dr. Yudkin who proposed that maybe sugar had some ill health effects and Keys went after him. Even worse, there’s this other guy, this professor Kilmer McCully was his name. He’s a Harvard researcher who was just kind of innocently looking at this link between homocysteine and arteriosclerosis in children, and there was this weird linkage like where higher homocysteine levels lead to like, what looked like old people like their arteriosclerosis in some children through some birth defects or some genetic defects. It’s like, he’s just publishing along doing this research, kind of minding his own business, and the fact that it got close enough to calling into question the cholesterol hypothesis, they shut him down, canceled him, kicked him out of Harvard, took all his funding away. And even, when he went to go interview at other places years later to try to get a job, they would call ahead and blacklist him.

This is like, it’s religious type of– level of [laughs] like the earth is flat kind of thinking. There’s a little bit of reason for this. So, the sugar research foundation promoted fat in the studies as is like trying to make it the culprit in all of this stuff. There were these two brothers by the last name of Kellogg, who happened to invent this thing called cornflakes, and it turns out that they were Seventh-day Adventist, was a big part of their lives. Part of the Seventh-day Adventist prescription for being in that religion is to mostly eat like vegetables and grains. So, you have literally money and religion pushing on this cholesterol hypothesis and supporting the research for it.

Then on top of all that, you have the statin industry, which in the last, call it 40 years has been literally like $1 trillion worth of revenue has gone to the statin industry. They’ve put everyone on statins, basically. So, I’m not going to go all like crazy conspiracy theory on this.

How To Lower Heart Disease

Jake: You kind of have to say like Munger’s incentives would tell you like, “Boy, who stands to win, who stands to lose in this, and why do people behave in certain ways?” So, cardiovascular disease, I think, there’s probably some question marks around like how we ended up with the dietary guidelines that we’ve had for the last 40 years as a way of trying to be “heart healthy?” Well, I want to pivot this a little bit into–

In the early 1900s, there was this community that lived in southern Italy, in this town called Roseto. And a bunch of them for whatever reason decided to all move to the US together, and they started another town called Roseto in Pennsylvania. They all live together in this little community. What’s crazy is that, for some reason, they had half of the rate of cardiovascular disease compared to everyone around them. What’s going on? Like any guesses as to why that is? Maybe that a diet–

Bill: I was going to say fish and exercise.

Bill: Maybe they don’t have a lot of stress.

Bill: Yeah, maybe it’s genes. What else do we have, Toby? Let’s throw it out here.

Jake: All right. So, most of your answers are wrong.

Bill: Okay. They had constant diarrhea. Try that one. [crosstalk]

Jake: So, they smoked unfiltered stogies, “they drank wine with Abandon.”

Bill: That’s where I’m going if value keeps going like this.

Jake: That’s right. They skip the Mediterranean diet in favor of meatballs, and sausages, and salami, and cheese.

Bill: Good for them. They got sun on their genitals, I bet.

Jake: That might be part of it. Did they have easier jobs? No. It turns out most of the men worked in this slate quarry, where there was like noxious gases, and dusts, and all kinds of stuff. But you guys already, you did hit on what it was. And the answer is actually that, they had lower stress because they lived in a cohesive community where there wasn’t much Keeping Up with The Joneses because everyone lived in the same kind of small houses, lots of family around, lots of cohesion, and there’s a lot of structure and family ties around there. But for those who have to battle stress, perhaps products like CBD Oil UK can be of aid.

Interestingly enough, are you guys familiar with these like blue zone studies?

Bill: I am not. It doesn’t sound like those people are on Twitter very often, by the way.

Jake: Yeah. [laughs] That’s blue checkmark. Oh, yeah. So, exactly right, Bill. The blue zones are, they supposedly found these correlations with longevity and what they were trying to pin to a vegetarian diet. But if you dig a little bit deeper into it, there’s lots of places that have vegetarian diet, but have horrible mortality rates relatively speaking, and what’s probably more likely is that all those blue zone places have very strong social structures and family ties that create lower stress, while also products like the best CBD gummies that also help in this area.

Jake: So, what’s actually happening there biochemically with lower stress. And why is that? Maybe like some mechanism to cardiovascular disease.

Cortisol, right, is the stress hormone. When it’s released, it releases– So, it’s basically, priming your body to fight or flight, right? The time is like, “I’m going to need to do something right now.” So, it’ll release energy within your system. So, it’s called catabolism. It’ll speed up your heart rate, it’ll dilate your pupils, your liver will start producing more clotting factor actually, in case you get hurt, you want to stop the bleeding.

Tobias: So, you don’t bleed out?

Jake: Yeah, you don’t bleed out. Like it actually will ramp up clotting factor. Raises your blood sugar, so that there’s more energy available. Basically, will deprioritize repair and your immune system because it knows it needs to handle something right now not be worried about the future. So, it actually starts like basically hyperbolically discounting the present compared to the future. Now, normally, cortisol will be dumped by exercise. So, typically, when you’re going to get into a fight or flight, it would be cleared out by you actually moving and doing something. [crosstalk]

Tobias: If you actually got in the fight, you’ve actually cleared it all out. So, fighting is good for you. And that’s all we have time for, folks. See you next week [crosstalk]

Bill: That’s what I got.

Bill: I think we just got demonetized.

Jake: As soon as I said cholesterol, we were demonetized. This is like tinfoil hat stuff.

Tobias: Big Statin’s got us.

Jake: Statin got us.

Bill: The statin industry definitely, probably, actually lobbies Google. I don’t know how that works but I’m going to go with it.

Tobias: I don’t want to derail you, dude. I’m interested to know how do we– Keep going.

I think if we like actually wanted to get convoluted with this like, I think, we may be doing a really nice service, the show in like providing a little bit of levity, and a little bit of community, and suffering through things together in a way that hopefully, maybe, we’re reducing the cortisol resolve for everybody who happens to tune in. This is like a fairly tight knit little community that maybe like we lean on each other in such a way that, I’d like to think that we’re all helping each other to clear some of that cortisol and maybe live a little bit longer and better lives. So, that’s a kind of a Thanksgiving thing I wanted to like, we thank you to everybody as part of the community to that–

Bill: Oh, I thought that you were trying to tell them to thank us, which I liked.

Jake: Well, that can happen too.

Bill: You are welcome for us gifting you with our presence.