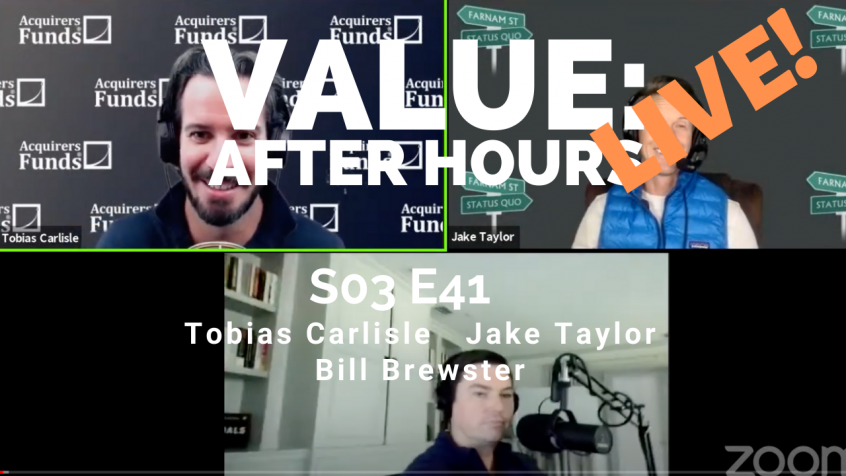 In their recent episode of the VALUE: After Hours Podcast, Jake Taylor, Bill Brewster, and Tobias Carlisle discussed Toxoplasmosis Makes You A Better Investor. Here’s an excerpt from the episode:

Jake: At your own peril. So, I have a kind of gross one for us today which should be fun. And it’s this little protozoan, that’s called the Toxoplasma gondii and Gondii, I’m not sure exactly how people say that, but [crosstalk] it causes toxoplasmosis. And it turns out 30% to 40% of the world’s population is infected with toxoplasmosis to varying degrees. So, in rats it will cause rats to take risks including go up to cats and basically get eaten. Obviously, it greatly increases your chances of being eaten if you go up to a cat and you’re a rat. But that’s where toxoplasma wants to end up is in the gut of a cat, where then will come out of the cat in the cat’s poop and somehow find its way into humans from cat poop.

Now, lest you think that there are all these people out there eating cat poop, I don’t think that’s actually true, because this little thing can live for a year outside of the gut of whatever animal it’s in and get transferred. So, somehow a year, it touches something, it touches something else, and eventually, it winds up in your mouth, and that’s how 30% to 40% of people have this. It’s disgusting but we’re going to keep going.

Bill: Somehow it ends up in your mouth.

Jake: Well, we’re going to get to more of that. So, it seems to are we–

Jake: It seems to preferentially prefer to take residence in the amygdala of the brain of whatever animal that it’s in. So, oddly enough the amygdala, when it is suppressed will make rats less fearful and actually more sexual. So, if you remove the amygdala of an animal, it will become hypersexual, fearless, and I’m just reading from this is research, it’s not me, become hyperoral, which means inappropriate objects placed in the mouth.

Tobias: I’ll take some swabs down the Wall Street to find out what’s going on.

Jake: We will get to that, but a lot of this came– the inspiration of digging into this more came from this guy that I follow on Twitter named Ethan Mollick, who’s a professor at Wharton that studies innovation and entrepreneurship. What they found was that, Toxoplasma gondii, the infection is associated with a subsequent increase in the probability of becoming an entrepreneur. So, your risk appetite in the world maybe dictated by this little tiny thing that forms cysts in the brain, and there’s this little 50 micrometer which is 10 to the negative six power of a meter, little tiny things.

Jake: Well, sorry, it’s like a roughly the diameter of a human hair.

Jake: So, people like students with this who are measured are 180% more likely to start a venture and infected founders have 8% more revenue when surveyed in the venture space. So, it does make you wonder like what if you’re a trader or an investor or maybe you want to get tested to see like, “God, am I predisposed to risk because of this little tiny protozoa that is infecting my amygdala and changing how I perceive risk,” or maybe, if you’re a VC, you actually want to measure your potential founders that you want to invest into, maybe slip a little cat poop into their food. I don’t know.

Tobias: That was I was going to say. Is this a risk factor, is this like one of the things that you like 8% more revenue, that’s material?

Jake: Hey, I mean, sometimes you got to-

Tobias: You got to do whatever is necessary.

Jake: -break a few eggs to make an omelet. [laughs] So, here’s what I think is what gets weird is that–

Tobias: Here’s where it gets weird. [crosstalk]

Bill: Good. I was looking forward to that. I’m convinced I’m not even mature enough for this segment by the way.

Jake: Yeah, that’s fine. Google Trends, if you look in 2010, there’s a lift off in people searching for cat videos. So, I’m thinking you know maybe there was an infection period there and that’s why everyone’s risk taking deep into this bull market. It’s because it’s all toxoplasmosis.

Bill: I actually have a theory that right now, despite all the surveys, and despite the valuations, and this is going to sound really stupid. But I think these IPOs and some of the SPACs that we’re seeing may actually be some really, really good 10-year businesses to own. Because I think that coming out of 2010, there were some tax incentives that created some really good companies. I don’t know. I’m going to be really interested to see how this period seasons. Obviously, starting valuations are a headwind.

Jake: Yeah. I would probably– If I was a betting man, I would say incredibly high dispersion with some of probably the biggest winners of all time, but a base rate of like nuclear fallout.

Bill: Yeah. I don’t think that I disagree with that.

Tobias: Can we deduce anything from the fact you’re wearing a Patagucci vest there? Have you joined the [unintelligible [00:26:20]?

Jake: That’s what you can deduce.

Tobias: Patagucci and toxoplasmosis, and your superstar trader.

Jake: That’s what we figured out this week.

Bill: All I know is, Jake’s putting a lot of stuff in his mouth. That’s the only thing that I took from that entire segment.

Tobias: The scariest thing is that impacts your behavior so much like, rats showing up in front of cats like, I think they’re attracted to the smell of cat urine as well. It completely gets rid of their fear of cats and reverses it, it makes them attracted to them. Who knows what it does to humans?

Jake: Sexually attracted to them is what the study showed. I don’t know, what kind of like, Tom and Jerry stuff you’re watching to come up with that one. [laughs]

Bill: Dude, I tell you what. That’s some Darwinism cold stuff for the rat. It’s like, “Oh, you get all turned on and all of a sudden this cat [sound].” Just like buying a value stock.

Tobias: Eaten by a cat. Oh, it’s toxoplasmosis. I mean, this has got to be–

Jake: Yeah, maybe. I mean, we have this idea that being– Humans are a little biased towards optimism, which probably helps us in an emergent way, but maybe not in the individual way.

Jake: Right. So, this is maybe a comparable thing where it’s from the individual standpoint, it may actually be suboptimal. But from moving–, grinding the wheel forward of society it is perhaps more optimal.

Tobias: I think if I look at my portfolio, it’s pretty clear that I don’t have toxoplasmosis.

Jake: You got a real shortage of it, huh?

Tobias: There’s not a lot of risk taking in that portfolio, yeah. Bill, how’s your portfolio?

Bill: I think I probably have a moderate amount of cat shit.

Tobias: Yeah, that’s really scary. It used to be the thing that if the cat lady would die of toxoplasmosis.

Tobias: Well, so it can eventually-

Jake: -cause 70 cysts in your brain that it will mess up the function and lead to actual real health consequences. For the most part, people don’t notice that they have it obviously, we’re not all– 30% to 40% of us are not running around like cat shit zombies.

Tobias: So, I’ve got this urge to go and put everything on red and just let it ride, just let it keep on going.