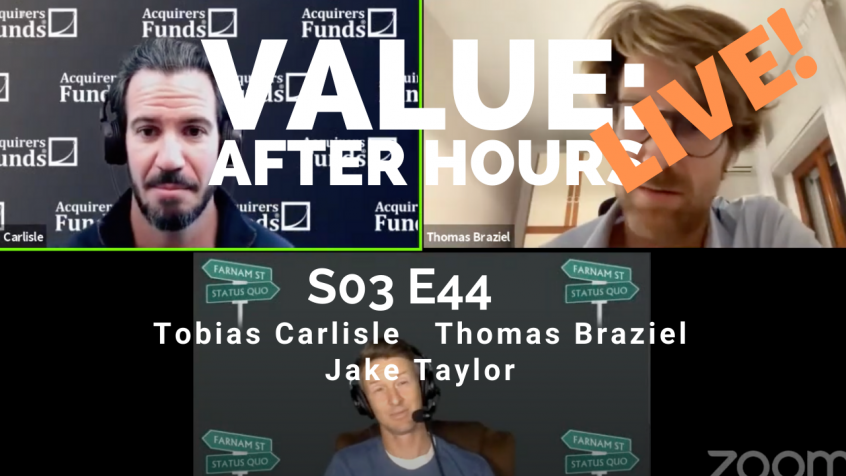 In their recent episode on the VALUE: After Hours Podcast, Taylor, Braziel, and Carlisle discuss Bitcoin As A Hedge Against Money Printing. Here’s an excerpt from the episode:

Tobias: What is it that appeals to you about it? Is that replacement of gold, as a hedge against fiat currency? Is that the attraction to it or what else is it?

Thomas: Sure, yeah, I like the autonomy, individual sovereignty. People that are real cypherpunks if you go and try to get past all the speculative crap that’s going on, and who knows what some of the tokens are worth, and who knows what coins really worth, some of the ideals and ideas of cypherpunk movement and then now I guess crypto in general movement are pretty revolutionary, if you think about it, like self-sovereignty, censor less internets, Web 3.0 projects that are incredibly interesting. I don’t know if you guys have ever– Jake or Toby, have you ever looked at any of these? Have you all ever looked at any of these like Web 3.0 projects?

Tobias: No. What do they do? What does it look like?

Thomas: There’s one called R Ware, another one– they are basically, the whole internet is going to be archived using like a cryptographic system with rewards. The idea is no one can take down any pages. There’s no censorship of the internet. It can’t be blocked by governments, things like that. The same thing gets [unintelligible [00:15:19] the idea is to have a censor-less infrastructure of Wi-Fi hubs or whatever.

Another one that I really like is supposed to be like a cryptographic– like GitHub. So, GitHub, all those repository of computer code is stored in GitHub, which is owned by Microsoft, just kind of bizarre, and this is going to set up a basic and independent structure where they can have GitHub where people are putting up all the code that basically runs the entire planet of software that we all use, and things we don’t, any electronics, and they’re going to have mechanisms for paying people micropayments that maintain the code or fix bugs in the code and things like that. So, it’s not going to be owned by anybody. It’s going to be basically this sort of out there thing where it’s totally censor less. I think that’s incredibly interesting and powerful.

Who knows what the token’s worth? Honestly, who gives a shit what the token’s worth? It’s not the point. The point is something that is very interesting and powerful, and probably great for humanity. So, that’s why I’m like fascinated by crypto, but that doesn’t mean I’m like going out and have a bunch of coins in my wallet, and oh, my God, it’s up 1,000%. Who cares about that? I understand that people invest money try to make money, but there’s so much more to crypto than just punting around with tokens, which is what’s talked about all day, every day.

Tobias: Yeah, I find that aspect of it, the token punting, boring as hell. But the other part is very, very interesting, the distributed organization, if you can find some way to make that eternal, incentivize people to use it and keep them functioning, because that’s the problem where all of these things kind of break down over time as the interest disappears. But if you can find somewhere to keep on incentivizing people to work on them, then that’s very interesting. Probably, even– [crosstalk]

Thomas: That is provocative.

Tobias: Yeah. It affects that and don’t have a legal– [crosstalk]

Thomas: The thing can hold that they don’t experiment. It could just disappear and all not worthy.

Tobias: You never want the legal entities sorted out, right? You want them to remain in that– [crosstalk]

Tobias: Because if you saw at the legal entity, then you’ve got residents issues, you have taxation, you’ve got other things. But if you don’t ever resolve that issue, then it’s just not resolved.

Thomas: Is it possible, Toby, that you could have– Someone could still sue you in a local court of jurisdiction, even though you’re a foreign corporation or foreign DOA. You don’t need to say- you know what I mean, like if I sue someone in New York or Delaware or California just because that’s my location and we had some clear contract, if that organization, it claims to be a DAO, it doesn’t really matter. I can sue foreign, I could sue Jane Doe, John Doe. I don’t know.

Tobias: You can sue anybody, but you’ve got to be able to collect on the damages award.

Tobias: So that changes the equation.

Tobias: You can sue anybody and win. Just some people just not worth suing.