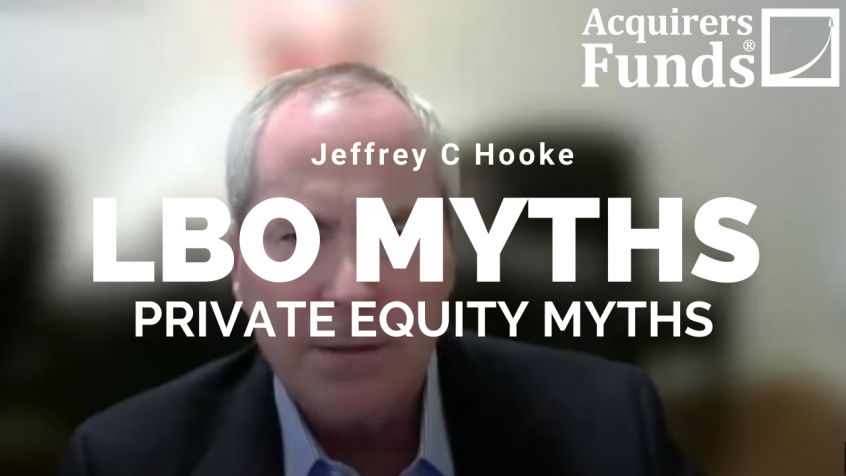 During their recent interview on The Acquirers Podcast with Tobias, Jeffrey C. Hooke, finance professor and author of The Myth of Private Equity discussed The Mark-To-Market Fallacy In Private Equity. Here’s an excerpt from the interview:

Tobias: There’s this mutual myth, I guess that they each agree on the customers and the funds, and that’s that the returns are a lot smoother than they are in actuality and it benefits the investors because they don’t have to show the big markdown on that presumably, private markets are the pricing even though the market isn’t marked to market. The market is shifting all the time, and it’s as volatile as a public market investment. But you don’t need to show it because the market doesn’t come in at least until the end of the month, and then the manager has an opportunity just– it’s not literally the worst trade.

So, a private fund manager has all of that– if the fund is publicly traded that every single trade is known, and so the drawdown might look enormous, the volatility looks enormous, the private fund that might have an identical company, but it’s privately traded or it’s not trade at all, it’s private. They look at this other mark. So, the volatility reduction is false, it’s fake, but it’s real enough for the fund investors. Does that make sense?

Jeffrey: That’s been a practice that’s I’ve pointed it out. A couple other people, there’s a small coterie of people that share my views and publicize them. But you’re absolutely right. I’ve been an investment banker for many years before I became a finance professor, and I was also a private equity investor. I can tell your listeners that you’re absolutely right. The market for publicly traded companies has a very high correlation to the market for private companies. So, if you’re doing a merger deal as an investment banker, the pricing that you will get when you sell that company will correspond pretty well to public market pricing for similar companies. So, what happened in 2008, 2009 when the market cratered, the stock market crater private market values defined as what companies were selling for and M&A deals also dropped. It dropped significantly, probably 30% if you look at the data.

So, interestingly, buyouts even though, they’re more leveraged, if you look at statistics for what the buyout firms said happened, they said that when the market dropped 37% in 2009, they said by some sheer weight of fancy, I guess that our investments only dropped 30% which contradicts financial theory of the last 60 years, multiple textbooks and three Nobel laureates. No one questioned that. No one. Not the government, not the investors because it was all in their interest to show a smoother ride than the volatile public market. So, that marked to market conundrum or paradox has continued since then, which now we can look at it 12 years, where the leveraged buyout equity as a smoother rate of return than the stock market themselves, which of course, as I said a minute ago, turns financial theory upside down.

Tobias: Guess you always do fairly well on exams that you mark yourself.