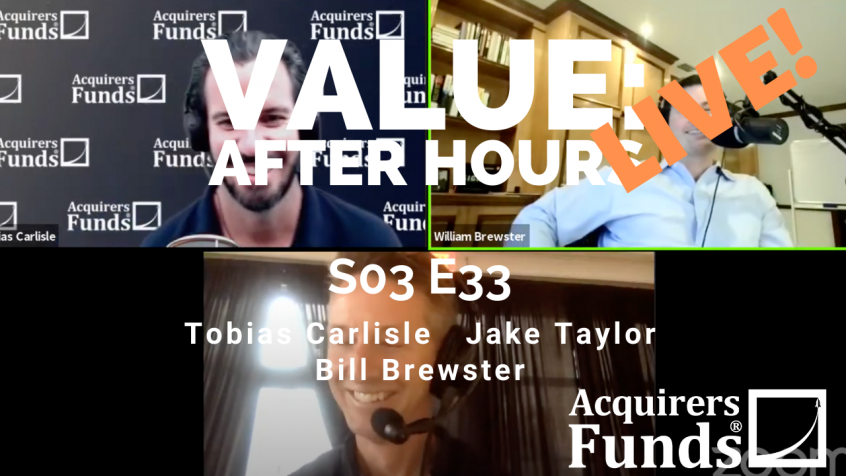 In their recent episode of the VALUE: After Hours Podcast, Taylor, Brewster, and Carlisle discussed NFTs: The Future of Art Or A Waste Of Money. Here’s an excerpt from the episode:

Bill: Oh, NFTs, I think it’s fairly easy to connect. I think within investing, meme stocks in general are very– That’s like a direct steal, but I think if you look at accounts that have gotten big in stuff, people follow people into ideas. I struggle with how much of this is different versus how much of this used to just go on at– I paid a lot of money to go to this conference, and somebody really smart pitched me on this idea, and then I bring this idea out to my idea dinner, and now my idea dinner shares it with other people. I just wonder how much social media has turned this into the open versus how much not. I know it’s different. I’m not clear how different it is.

Tobias: What’s the argument for NFTs as an investment class? [crosstalk]

Bill: I wish that I bought one of these Bored Apes. I love those things. I think they’re dope. It’s a way to flex on the internet and there’s some social agreement. I know the Board Ape that I would buy if I wanted one. I have a picture of it on my phone. I don’t share it. I would never make it my profile picture. It’s against the code. That’s fucking rude. I think that matters to some people. Now, people may say, that’s really stupid, but I think it’s stupid to spend a bunch of money on a Picasso. What’s more different? Something that I can actually flex to the world and everyone can see it or something that I have to masturbate over about in my house?

Jake: So, is that consumption or investment though?

Bill: Well, I’m not sure that it’s either. It can be both. I agree, it’s like a way to peacock but there’s no underlying cash flow. So, if you want to find investment is something that can pay you back, then I think you have to get into the artist rights and stuff like that. But those things are going to trade on the underlying cash flow. They’re going to trade on the ability to signal something to a crowd.

Tobias: Yeah, let’s separate out. So, non-fungible tokens, I do think that they probably do have some utility. I’ve seen guys selling them to conferences, and probably that makes a lot of sense. The pictures or the trading cards, I also understand that too, but the level that it’s got to where it’s like $5.5 million or whatever was paid for Beeples, it was $69 million for Beeples. Where’s that money coming from?

Jake: Wasn’t it Ethereum that were traded for it or something– [crosstalk]

Tobias: Is it money laundering?

Tobias: Well, but Sotheby’s has a know your customer requirement surely.

Bill: I don’t know that people even know right now, but I know that as far as Bored Apes go, I think a lot of it has to do with just signaling on the internet. I think that means a lot to people. Whether or not it means something to somebody is debatable, and no one has to participate. I certainly wouldn’t expect the value crowd to understand it. People spend hundreds of millions of dollars on art that I think is worthless. How’s an NFT any different?

Jake: It’s an amazing thing to look at our species and say, “Wow, we’ve reached a level of affluence where we could put that much resource into something that is that subjective in value.” It’s not like, “God, I need to get a roof over my head and a meal. I haven’t eaten in weeks.” We’ve reached a level where we can sell each other digital shit. It’s cool in a way to be that affluent.

Jake: Does the lack of scarcity matter there though?

Bill: What do you mean?

Jake: Well, if you have that one Picasso and it’s in your private collection, no one gets to look at it unless you say they could look at it. Whereas this is like, I can go get the same artwork, bitmap, as whatever the real one is, I just technically don’t have– It’s not recorded in some blockchain somewhere that that’s mine. But the experience of viewing it is not much different.

Bill: Yeah, but you could presumably get a print of the Picasso or look at it on the internet. Unless it’s like this one Picasso that’s never seen the light of day.

Jake: Yeah, sure there are those private collections like that.

Bill: So, Beeple could generate art and sell it privately, and then discreetly issue in NFT, and people don’t ever have to see it. It can just go into a vault somewhere.

Bill: Yeah. I think it’s just different. I think it makes people uncomfortable, but I don’t think that means that it’s crazy. That said, I don’t own any, but I do get it.

Tobias: It’s overpaying for something, because there’s people overpaid for these things already with the expectation that they’re going to make– You’re buying a lottery ticket, you’ve got this lottery ticket outcome likely. I think that the more likely these things bottom down a lot, like 99% or more, Beanie Baby type stuff.

Bill: I assure you that the three of us are not the people that are qualified to comment on something like that.

Tobias: No one’s qualified to comment on this. What do you mean? This is what I do. I think about the value of stuff all the time.

Bill: Yeah, these fall outside of where I think your brain would naturally go anyway.

Tobias: It’s like anything. These things do follow their own– It’s not like there are no rules and you can’t understand any of this stuff. It’s the same thing that’s happened over and over and over again with people pretending a little bit of technology makes a big difference. It doesn’t. Same shit, different day.

Bill: Well, my point is you don’t know it’s not. I don’t know. I don’t have a strong opinion. Frankly, I don’t give a shit. It doesn’t matter to me. I don’t care what my prediction is. What I do think is I think if you say this is a bubble, therefore it’s going to crash, and I don’t need to learn about it, that’s where I have a problem with thinking. Because I think that line– [crosstalk]

Bill: Not much, but guess what. As an asset class, it’s performed pretty well. If this is truly digital art and people actually start to value it, it can actually make people money. Whether or not you want exposure to that asset class is a different question.

Tobias: I don’t think you have to kiss all the girls.

Bill: Yeah, well, that’s fine. So, don’t. But I don’t need to have an opinion on every girl either. I haven’t even dated this girl. I barely even know her. I just see an ape on the internet, and I like it, and I wish that I could buy it. If it was like a grand, I’d buy it. But it’s like a couple million bucks. I don’t have any–