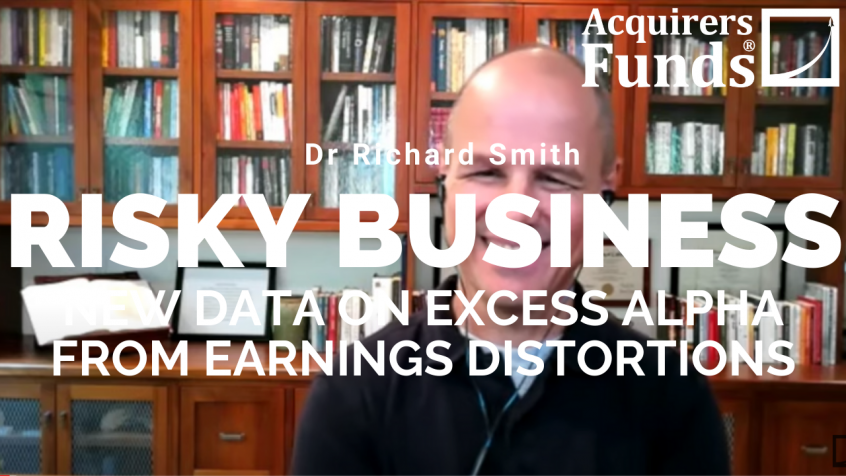 During their recent interview on The Acquirers Podcast with Tobias, Dr Richard Smith, PhD in Systems Science discussed why Gamblers ‘Enjoy’ Losing. Here’s an excerpt from the interview:

Dr. Richard: Then three, another one is that, if it’s a rich complex environment with lots of learning opportunities, that’s another thing that elevates dopamine levels. You can spend your life learning about markets. [laughs] That is a rich complex environment that you can learn a lot. Then the fourth one that really was particularly relevant is that, if the environment is highly randomized, if it’s really like 50-50, that’s the maximum situation where dopamine is released in your attempts to one anticipate reward and try to solve for reward. That actually ends up in gamblers, it produces what’s called loss chasing.

You actually enjoy losing for a while, because the outsized thrill you’re going to get when you finally get that reward. Meanwhile, we know markets don’t tolerate loss chasing indefinitely. [laughs] As John Maynard Keynes said, “Markets can remain irrational longer than we can remain solvent.” Risk of ruin is a big issue. It does eventually catch up with loss chasers. All these things are going on in the markets and they’re creating a very addictive relationship with our screens and with the markets. The presence of dopamine is an indication of an addictive experience, whether it’d be drugs or retail financial markets. So, all of that is going on, going back to my wish for transparency. If Robinhood would disclose, what they’re gamifying and what they’re making money on, I’m pretty certain that we’d find a correlation between those things.

Tobias: I thought you’re going to quote the Keynes quote, where he says, “Investing is intolerably boring to those who don’t possess the gambling gene.” But if you do then you have to– [crosstalk]

Dr. Richard: I did quote that in my article that will come out later today. [laughs]

Tobias: If you do have possess that propensity, you have to pay the toll something like that [crosstalk]

Dr. Richard: Yes, you do. It’s fine. If you say, “Hey, here’s my playing money. This is entertainment. I’m going to pay the toll.” But that’s not really what most people do.

Tobias: To what extent do they have an obligation to those investors to ensure that they have some success in the markets and to what extent are they just facilitating a transaction?

Dr. Richard: Well, I wish I knew. On the one hand, I do believe that the founders really did set out with an aspiration to democratize investing. I think that like anyone who’s running a business, you do end up having to not be entirely idealistic [laughs] at some point to generate a profit. Then I think that they got swept up in a bit of a unique situation with COVID, and everybody, all of a sudden taking an interest in retail finance, and Mr. Tenev admitted recently like, “Hey, we didn’t have all our ducks in a row to really take on this level of responsibility.”

So, I do sometimes hear him talk about really being in this for the long haul and wanting to encourage long-term participation in the markets. But when I see the quarterly statements come out, and I see all the revenue from meme stocks, and Dogecoin, and GameStop, and AMC, and I see the research of Paul Rowady over at Alphacution, showing how this data is being used to put together market structure, and market forecasting by really sophisticated players.

When Robinhood stops making money off of YOLO type trading and FOMO type psychology, that’s when I’ll really start to breathe a sigh of relief, because I really do think they have some accountability and responsibility to a new generation of investors, and it’s quite an opportunity for them. If they can think in terms of a decade instead of quarter to quarter, man, they’re in the catbird seat, and there’s an incredible opportunity. So, maybe now, they’ve gone public, they’ve gotten through the phase of having to make whole their original investors, and hopefully they can do something positive from here on out.

Tobias: We’ve lived through an unusual few years, because we’ve had COVID, people locked at home, people trading probably more than they would otherwise have done, and then we’ve had some unusual ramps in GameStop, AMC, and then also in crypto, and now in NFT’s. To what extent are they reliant on this boom, bubble, ramping type behavior? In a more normal market, where there’s less of that speculative behavior going on, how do they fare?