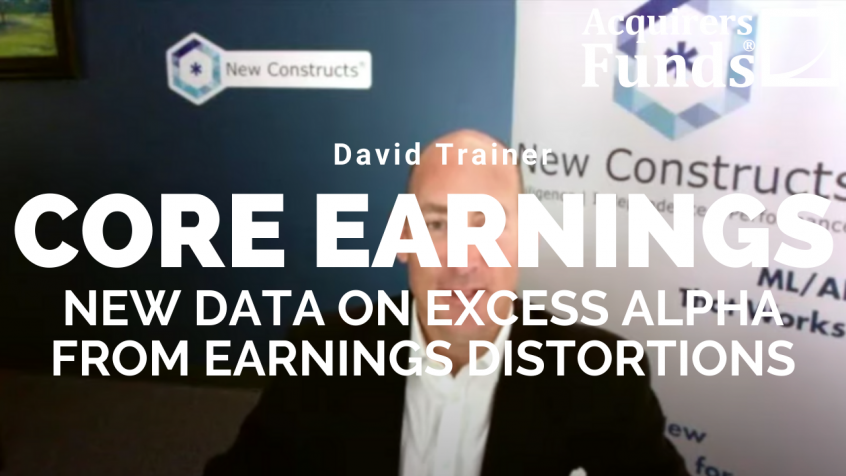 During their recent interview on The Acquirers Podcast with Tobias, David Trainer, CEO of New Constructs discussed Companies That Tell The Truth Outperform. Here’s an excerpt from the interview:

Tobias: So, David, you do the core earnings calculation, but then how are you deriving a trading signal from that? What is the nature of that trading signal? Is it saying these companies are more distorted, and these companies are less distorted, and is that the signal to go long or short, or is there value component to that? How do you think about that?

David: Yeah, great question. There’s three buckets here. There’s companies with high levels of distortion, they are overstating their earnings. Those are the ones you want to short. There’s companies with low levels of distortion or negative, and they’re understating their earnings. That’s where you want to go well. There’s a third bucket that we’ve discovered that also outperforms on a large cap and small cap level. That’s what we call the truth stocks, or the companies where there’s zero distortion, or really small amounts of distortion. This is actually a surprise to us and it isn’t covered in the Harvard and MIT paper at all. But it was something that was identified by one of our data partners, Exabel.

When we first looked at this, we didn’t see a strong outperformance as we do in some of the long-only or long short portfolios, but we do see outperformance. We do see way better volatility or even better Sharpe ratios. When it first was presented, I was surprised and I thought to myself, well, of course the market would appreciate those companies that are telling the truth about earnings. They would see less volatility. It’s almost like we’re thinking about this as a new ESG factor. The companies that tell the truth about profits as a way to reflect upon the quality and the integrity of the management team.

Tobias: Yes, potentially, a governance factor, the truth in reporting or something like that?

David: Agreed. Yeah, it’s an interesting thing, but you hit the point, the nail on the head in terms of how you use it for trading. It’s looking at that distortion number, and then you normalize it, or divide it by total assets. That’s just reported assets or market value. Depending on the timeframe and depending on whether or not you’re looking at analyst distortion, an analyst distortion being the difference between core earnings and analyst consensus numbers, you can normalize by total assets market value or the absolute value of core earnings. As they’ve done this test for the machine learning, they look at all three and in different timeframes, different normalizes work a little better.

Tobias: Given that you’ve been doing this for 25 years plus, 26 years, have you noticed a change over time in the amount of distortion? Because I sort of ask because the late 1990s were very famous for there being quite a lot of distortion, and there were some attempts made to reign that back in. Is that the thing that as the bull market gets older, you see more and more distortion or is it just there’s more distortion over time?

David: The Harvard and MIT professors pointed out that there is more distortion over time. There’s more distortion in the underreported expenses. So, companies understating earnings, and we think that simply because of the nature of the world. There are a lot more ways to spend money than there are to gain money. That’s a trend. \

Honestly, Toby, you actually hit on something that we’re just now scratching the surface on, because it’s a lot of work to do this, but we’ve been looking at the difference between core earnings and S&P Global operating earnings for a long time, and GAAP earnings. We see a meaningful difference over time. But we lose in looking at just the absolute difference is the amount of under or overstatement because a lot of that cancels out. If you get one company that’s understating and one company that’s overstating, that’ll cancel out. So, we’ve started to track the percentage of companies that are overstating by 10% or more and understanding by 10% or more.

We’ve seen in just the last couple of years, because I’ve only done it for really about eight quarters, we’ve seen a pretty market increase. It’s a good way to look at it in terms of ones that are adding together how much it’s overstating, how much you’re understating because we’ve seen a big flip flop in the last eight quarters.

During the downturn in the market meltdown at COVID-19, we saw a lot more companies understating. Now, we’re seeing a whole lot more overstating. But in aggregate, that number is going up, and that’s consistent with what the Harvard and MIT professors tracked back to 1998. We want to do it in a little more granular way where we look at the number of companies overstating compared to operating or consensus earnings, or analyst earnings, overstating and understating by more than 10%.