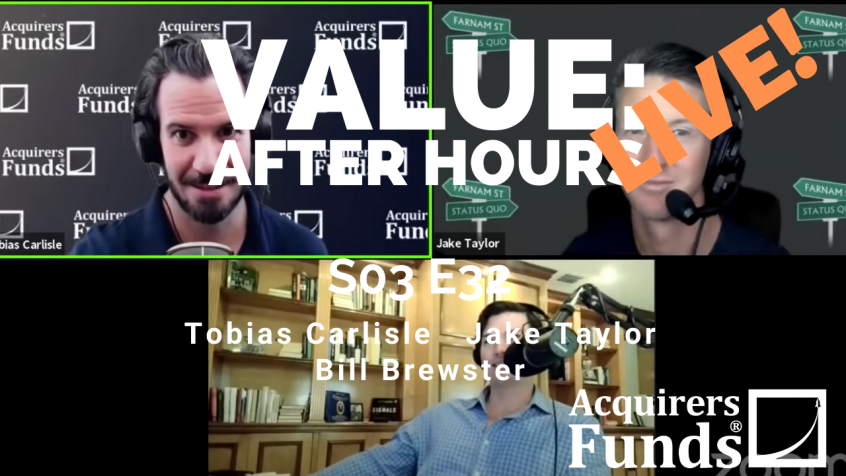 In their recent episode of the VALUE: After Hours Podcast, Taylor, Brewster, and Carlisle discussed Building A ‘Hail Mary’ Portfolio. Here’s an excerpt from the episode:

Tobias: Let’s talk about filling a portfolio with full of Hail Marys. I don’t mind that as a strategy for the most part. We lost Jake now.

Bill: I don’t know that you would fill the portfolio. I guess the conversation that I was having today that was making me think of Hail Marys is, I think that there’s room in a portfolio for some Hail Marys. I go back and forth on this like, “Do you want to dilute your best ideas?” But from how would you want to manage your life standpoint, I think that once you get to a certain level of comfort, there’s a portfolio that is safe, and you’re not risking your life comfort, and if it underperforms a little bit, you probably deserve it, because it’s probably not as risky as the market. But then if you can find some really spicy stuff to throw into it as a Hail Mary, that makes sense to me. It’s just you’ve got to size it right, and it’s really got to have the potential to hit. Maybe you don’t want to do it. I would get that too. Buffett would definitely not agree with what I just said.

Tobias: You’re back, JT? How is your mic?

Tobias: [laughs] Well, Buffett’s one of those guys who’s like there’s that– William T Ziemba has written that paper about Buffett saying that he’s been a Kelly-bitten investor the whole way through. We saw that in 2000–

Tobias: We saw that in 2018 or not. When did he really plow into Apple?

Bill: That’s not really a Hail Mary for him.

Bill: Yeah, I guess that’s right. Yeah, I think you’re right. Okay, I understand. I’m sorry to not make the connection on my own topic.

Tobias: That’s not a Hail Mary, I guess. [laughs]

Bill: Yeah. I’ve always thought of him as the opposite of a Hail Mary investor. I think that people would maybe look at his position sizes and say, they’re Hail Marys, but I don’t think he has much downside.

Tobias: I think that’s right. I think that that’s exactly right. That’s why I think that this book is the inverse of the one that I’m trying to write, which is basically don’t throw Hail Marys you don’t need to.

Bill: Yeah, I just think that there are different people that have different capabilities. That said, I would rather have a quarterback like Tom Brady than one like Jay Cutler. Jay Cutler was a Hail Mary guy that lost all the time. Brady’s a not a dink and dunker but doesn’t have some canon on him. He’s just accurate. He wins. That’s who you want.

Jake: Do you think that there’s maybe some career implications when it comes to Hail Marys? Should you be throwing Hail Marys when you’re young, and you don’t have as much to lose?

Bill: Yeah, and you’re an anonymous account and just fold it and do another.

Bill: Yeah, for sure.

Jake: Or a fund even. That’s not uncommon to see somebody blow up a fund and then come back and start another one, right?

Tobias: Here’s the only problem with that behavior. Part of the reason that I am attracted to this subject, and the reason that I have written a book is, I know lots and lots of guys have thrown Hail Mary’s to start their careers. We all know people who take way too much risk. But within that group, I know lots and lots of guys who’ve connected and are now fabulously wealthy as a result. But within that group of guys who threw the Hail Mary and connected, a material number of them just never gave up the behavior. They just kept on throwing Hail Marys, and they’ve gone back to square one. That’s the thing that it’s that pattern of behavior that I’m interested in studying and interested in avoiding.

Jake: But what if you think you’re the exception to the base rate?

Tobias: One in a million.

Jake: Oh, was that a one in a million talk?

Tobias: But that [laughs] the first part where you throw the Hail Mary– I think you’re right. When you’re young, it does make sense throw some Hail Mary’s. But when you connect, you’ve got to change your approach. You have made the leap across the fiery chasm and you’ve got to [crosstalk]

Jake: You’re just handing it off three times in a row and then punting.

Bill: Then playing the prevent defense.

Bill: I guess as it pertains to investments. I think strategy of a lot of Hail Marys can work. I just don’t think you can size them big. So, then maybe it’s not even a Hail Mary. Maybe it’s just a deep pass in the first quarter.

Tobias: Yeah, I think that’s right. Clearly, you can run a book that way where you’ve got– [crosstalk]

Tobias: You’ve got a 1 in 10 chance of whatever, I haven’t done these calculations. But I’d go and work it out what did I actually– [crosstalk]

Tobias: But then how many positions should you have any portfolio to reliably guarantee returns– or you are not guaranteed, but reliably generate returns?

Bill: Yeah, you need the expected value to be in excess of one. I need to actually look at a paper and do this math.

Bill: Yeah, you think 10, right? [crosstalk] But then, how correlated are they, and how different are they, and it’s got to be truly noncorrelated bets in order for this theory to work. It’s hard to find those.

Jake: I’m not sure how many of those exist anymore. Feels like there’s a lot of correlated bets these days.

Tobias: You could have little special situations though, and you could you could do with an option, which really you could shape that payoff. You really could find those payoffs if you’re hunting for them hard enough, and then fill a portfolio. Victor has made the point that lots of Hail Marys in a portfolio, that’s like a VC portfolio. That’s what maybe even more aggressive than a VC portfolio where they explicitly say, “A small portion of our portfolio is going to hit. But the hit is going to be so big. It’s going to take care of everything else.”