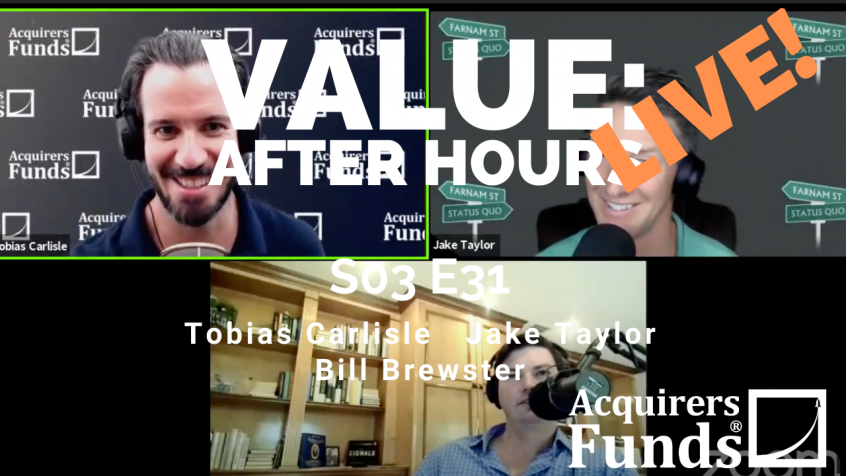 In their recent episode of the VALUE: After Hours Podcast, Taylor, Brewster, and Carlisle discussed Why Did Charles Munger Buy Alibaba?. Here’s an excerpt from the episode:

Bill: We’ve talked about this. I think Munger wanted to teach everybody that was–

Bill: Yeah, I think he did. I think he wanted to say, “I’ve been saying forever that China had better companies than over here does and this got cheap enough, and I talked to Li Lu and I’m comfortable and I’m buying this thing. If you still have your head in the sand after this, then I can’t teach you anymore.” That’s what I think Munger was saying when he bought it.

Jake: Yeah, I think he said it publicly that you should be fishing where the fish are, and where there’s not a lot of really good fishermen all standing shoulder to shoulder trying to fish, which says, look outside the US, and perhaps China is an interesting place to be fishing.

Bill: They got IBM wrong too. They swing and miss.

Jake: This is a probabilistic game.

Bill: An I think it’s way too early to say that Charlie’s wrong on Baba.

Bill: He did not bottom ticket like he did the banks in 2008.

Tobias: Yeah, and he doesn’t have very many positions.

Jake: If he’s right, then you can be more right than him, today.

Bill: It’s more of a statement.

Bill: I don’t think he thinks he’s going to lose. That’s not my comment. I just think it’s not that big of a bet, and it’s just kind of a bet. I bet if he was in a fund– I don’t know. I guess I wonder how big he would have gone in out of the gate if he was in an LP. Certainly, he’d be buying more today, if he had dry powder —

Jake: [crosstalk] You have a little bit. There actually margin in that account some.

Tobias: Be very concentrated except in Berkshire, which is very diversified. Although it is concentrated, its big positions, I guess.

Bill: I guess. I’ve decided I have a problem with the way he markets his positions.

Bill: Yeah. I always have.

Bill: He doesn’t have three positions. He’s got [crosstalk] exposure in a massive conglomerate. Li Lu’s got more than one position, and Costco is a true one position. I think that I understand what he said or what he’s saying when he says it. I think that if the uneducated or new to investing people hear that, and they truly think that’s three positions, then they’re not actually paying attention to what’s going on.

Jake: It’s not the business necessarily.

Bill: Yeah, I think that’s fair. But that’s different than how most people associate a position.

Bill: Yeah, I know. That’s why he’s smarter than Warren. He just found a genius and was like, “I’m going to go chill, and you can call me whenever you want.”

Jake: Been on that.

Tobias: [laughs] And on that note, that’s it, folks. That was fun.

Bill: Warren’s out there buying hell-damaged Lincolns and Charlie’s got the Bentley.

One Comment on “Why Did Charles Munger Buy Alibaba?”