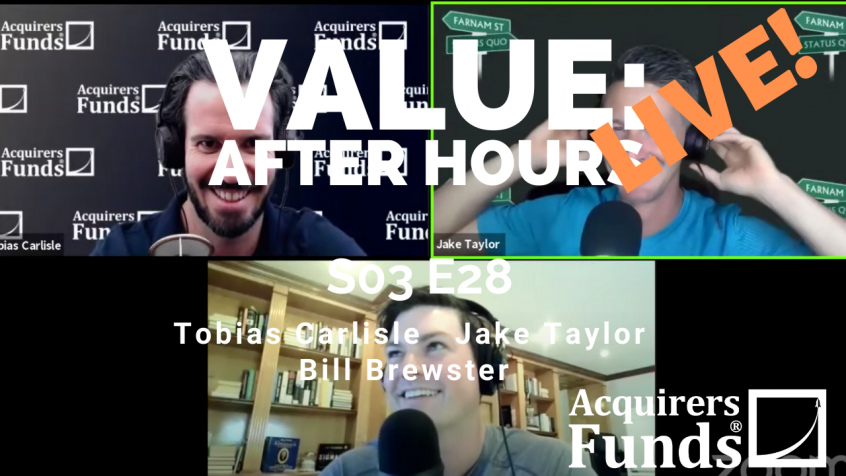 In their recent episode of the VALUE: After Hours Podcast, Taylor, Brewster, and Carlisle discussed Investing Lessons From Scott, Scurvy & Vitamin C. Here’s an excerpt from the episode:

Tobias: I got some veggies. So, I’m going to take away with some veggies. I think there’s an interesting lesson on this one. I backed into this after a conversation that JT and I had last week. This is an old article from 2010. I’ll link it up in the show notes. But it’s on Robert Scott– [crosstalk]

Tobias: [laughs] Yeah. No, we won’t. But you can search Scott, scurvy, and something else, and you probably find it. Robert Scott had a run at the South Pole in the early 1900s, about 1911, 1912 which is basically modern history because they were doing it– Thinking that they were pretty modern like. We basically sold scurvy in 1747, James Lind, who was a Royal Navy surgeon pointed out that people who had citrus fruits didn’t get scurvy on these trips, and it took about 40 years. Then, the Royal Navy… all of the ships carry some citrus in it basically solved scurvy, because scurvy is caused by a lack of vitamin C. This is 1911. So, long way afterwards.

They had this conversation with another– The trip was ill fated. Half of them died. The ones who didn’t die, did something a little bit that– Not to give the whole thing away just yet, but basically, they headed out on the ice. They had scurvy before they headed on the ice. They all died of scurvy, including Scott.

They recorded the conversations that Scott would have or other people would have with the surgeons on the ship about their views on what was causing the scurvy. The funny thing is that we thought that we’d solve this 100 plus years earlier, 200 plus years early, and it turned out that we hadn’t. All we figured out was that there was this association between citrus fruits and scurvy.

We knew that if you ate it– but we’d known that for a very long time. All James Lind did was codify that information. Before that, even Vasco da Gama knew it, when he hit it out on his voyage in 1497, that they should take some citrus with them. It had been known, but the exact mechanism wasn’t known. We didn’t know it was vitamin C. We didn’t know about vitamin C. The Royal Navy mandates this citrus– It was sort of an advantage that allowed their ships to stay out on a blockade of Napoleon for years at a time where the other navies couldn’t do that, because they didn’t know about the citrus fruit protecting you from scurvy.

What happened in this 1911, 1912 trip that caused these guys to all die of scurvy given that we’d known about it for so long beforehand? There’s been a variety of things, confounding factors in between. One of them was ships got faster and faster. In the early 1800s, mid-1800s, they became steam ships, which were very, very quick. It would take a couple of weeks, and you don’t get scurvy in a couple of weeks. It takes longer than that. So, it was unnecessary to have vitamin C at all on the ship, because you’re getting fresh fruit– before you left, you get fresh fruit when you get to the other side. You don’t get scurvy.

That’s the reason why these other things started happening, because we just didn’t know that was superfluous through this period. Lemons were difficult to get hold of. They had an abundance of these limes, and they thought that the association was acidity. It was a lack of acid in the blood that was causing scurvy, and so you had these limes, and they’re more acidic than lemons are.

But the problem is that they’ve got about a quarter of the vitamin C of lemons. In addition to that, they stored them in these– You don’t want to take the whole wine with you, so you juice the wine, and then you stick it in this open-air pot, and there are copper piping taking it from one place to another, and the copper piping denudes the lime of its vitamin C. It’s already got not much vitamin C. So, basically, they eliminated all the vitamin C, but it didn’t matter, because they were getting everywhere so quickly that nobody was getting scurvy.

Now, fast forward to 1911. They are following all the things that they should do. They’ve got their lime that’s been stripped of all of its vitamin C. They head out. Already, people are getting the telltale signs, a little bit of white around the edges of the gums a little bit of red, starting to see old sores open up. They’re stuck on the ice in the dark, half of the party heads off…

Bill: Wait. What did they try to do, you froze up for me? Did he freeze up for you, Jake? I was like in this.

Tobias: They are trying to get to South Pole.

Tobias: I don’t know. It might just be. I forget. That part, I might have just added that. It doesn’t destroy the story. Basically, if you eat fresh meat, you get some vitamin C from the fresh meat. So, they didn’t get scurvy. They didn’t really know, and it was a terrible expedition. All the guys die, including Scott. Half of the crew gets back, and they tell the story.

Once again, they have to go back to the drawing board and figure out what is the connection between citrus and scurvy? That’s when they figure out that it’s in fact, vitamin C. But they had these other theories, because we just become aware of bacteria. Is it bacteria in the blood and therefore the acidity, that should kill the bacteria?

Is it [unintelligible [00:12:43] poisoning, is it this mysterious kind of poisoning that everybody’s getting? It turns out that it’s vitamin C, and if you get that, you just don’t get scurvy. But if you don’t get that even as someone who’s on land, if you don’t get enough vitamin C, because you don’t eat enough fresh fruit, you can get scurvy to this day.

I just think it’s an interesting illustration of how there had various confounding factors combined together to make us realize how little we actually know. It’s one of the concerns that I always have when I’m looking at a company, going through the valuation process. What are we actually trying to find, what do we know about these things, and what can you learn from even reasonably long periods of time in the market, 10 plus years? That you know to be true, that are just confounded by all these other factors. So, what do you guys think of that?

Jake: I definitely don’t want to get scurvy.

Jake: It sounds like an awful way to go. [laughs]

Bill: Yeah, that doesn’t sound fun at all.

Tobias: They detail it in this thing. It’s pretty nasty. They describe the death as a welcome death by the time we get to the end of it.

Jake: It is amazing. The diffusion of information and how slow it was back then, and you had to keep relearning the same lessons.

Tobias: Well, we knew that was vitamin C, and it had just been like old wives’ tale, but just received wisdom that people knew that if you ate the– Vasco da Gama in 1497, so 413 years beforehand, he knew that if you took fresh fruit, you’d be okay. But as just they try to refine it down, make it more efficient, and then refining it down, and making it more efficient, they completely removed the thing that was keeping people safe.

Jake: There is some interesting parallels there with fragility and Lindy effect of what’s worked for a long time, and then you think you understand why, but maybe you actually don’t understand why, and therefore, you end up creating a much more fragile situation for yourself.

Tobias: Yeah, I think that’s right. I also agree with the person who says that the cure for scurvy is stimulus.

Jake: Yeah, you could print scurvy away. No problem.