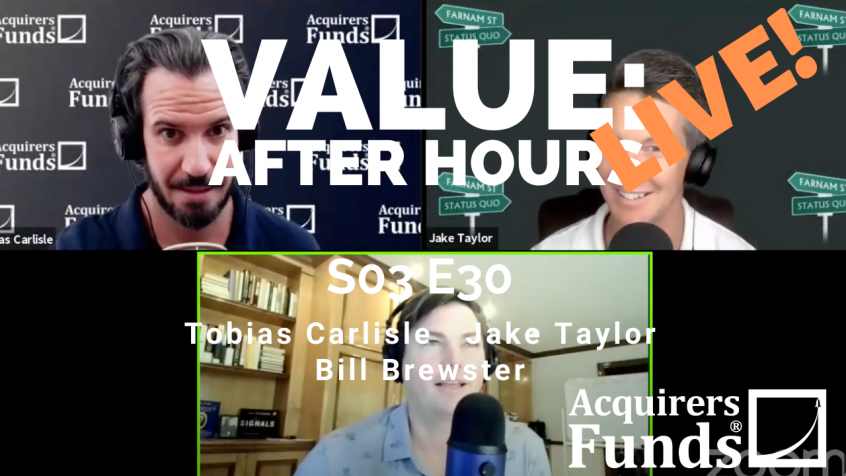 In their recent episode of the VALUE: After Hours Podcast, Taylor, Brewster, and Carlisle discussed Go Positive & Go First!. Here’s an excerpt from the episode:

Jake: All right. Let’s get into it. This is titled the Game Theory of Greetings. Some of the stuff we’re going to cover is out of this book called Wild Rituals by Dr. Caitlin O’Connell. She spent a ton of time in the African savanna studying elephants. Animals all have greeting rituals, social animals. Some of them are kind of funny. I know you guys like all the animal things. I don’t know why you come to investing podcast to learn about animals, but whatever. So, one of them is–

Tobias: What do the sperm whales do, JT?

Jake: I know. That’s what everybody wants, sperm whales, but I don’t have any sperm whale greetings.

Jake: Hyenas will apparently present their erect genitalia to each other during a greeting ceremony, which is obviously a way of making themselves vulnerable. We’ll get into a little bit more of why they would want to do that.

Bill: That’s how Toby and I met.

Tobias: [crosstalk] do that anymore.

Bill: Well, we got vulnerable together and then we got over it.

Jake: Yeah. Elephants will greet each other by placing their trunks in each other’s mouths, which is an interesting thing. Then, if it’s a very joyous reunion, they will both simultaneously evacuate their bowels and their bladder in unison. [laughs] So, elephants do things a little bit different. But there’s actually a biological reason why they will greet each other this way. It allows them to smell what the other elephant was eating, and then, presumably, what they’ve been eating is then safe, given that the elephant they’re meeting hasn’t died. So, it’s a way actually for them to gather information about their environment. That’s the same reason, actually, dogs will lick each other’s faces and try to lick your faces to figure out what you’ve been eating, so that they know that it’s more likely it’s safe to eat whatever that other entity has been eating.

Humans have a lot of different greeting rituals, and they’re always about being a signal of recognition of goodwill, of welcome. The Inuits, Eskimos have the Eskimo kiss, where they rub noses together. A lot of bowing, a lot of handshakes, which actually came from checking to see if the other person had a weapon on them like a dagger buried up their sleeve. Actually, the shaking motion might have been to like see if anything–

Tobias: Shake the dagger out.

Jake: “I’m going to shake your arm to make sure that whatever you have in there will fall out, and that way, I know you’re not trying to kill me.” Then, you have things like kissing the ring of the mafia don. Part of it is about hierarchical sorting, which can reduce tension, like when someone’s not sure who’s in charge. It strengthens the bonds. The other thing too is that it actually provides real-time psychological feedback, you can see what the state of the other person is, as well as actual exchange of hormonal feedback. The pheromones that we put off, we smell each other, and we are gathering information about that person. In fact, we’re often attracted to strangers, because it reduces the chances of potential inbreeding and creates more genetic diversity. So, they’ve done studies where they’ll have women smell shirts that a guy slept in, and they will be attracted to the scent the further they are genetically away from that person. It’s kind of interesting.

But there’s a game theory when people are meeting each other where and really it’s a– Shoutout to my friend, Paul, in Ireland who first connected these dots for me on. There’s actually like a Nash equilibrium that’s taking place. If you know about prisoner’s dilemmas. This is John Nash from the movie, Beautiful Mind. That was about him. But this is the math that he was working on. A Nash equilibrium is defined as a stable state of a system then, involves several interacting participants in which no participant can gain by a change of strategy as long as other participants remain unchanged. So, this is classic prisoner’s dilemma, where it doesn’t behoove you to– You’d be better off if you defected, and the other person also has to defect as well. So, it’s sort of a question of like, “Who’s going to go first?”

Jake: I know someone who has this– He told his daughter this in particular, and actually, I’ve tried to make this like a Taylor family motto, because I think it’s such a smart thing. But he tells them to go positive and go first. Really, if you think about this prisoner’s dilemma, the world is really programmed for this sort of tit for tat, which is a famous strategy in game theory, that is actually evolutionarily stable strategy. It’s very robust actually to– and it shows up in human form, which is eye for an eye or the golden rule. It’s always returned what the other person is giving you. That’s tit for tat. If the world is programmed for tit for tat, the logical approach is actually to go positive and go first because you’re likely to get back what you put out there. So, it’s a logical opening gambit in a world that’s programmed for tit for tat.

Tell your kids, as they go back to school, go positive, smile, say, hi. Go first because the other person kind of wants you to do it, and they want to smile, but they don’t want to be the one to put themselves out there because of this prisoner’s dilemma, like who’s going to go first? Who’s going to be vulnerable? Who’s going to put their trunk into the mouth like the elephant first?

Bill: Don’t do that.

Bill: Keep your trunk to yourself.