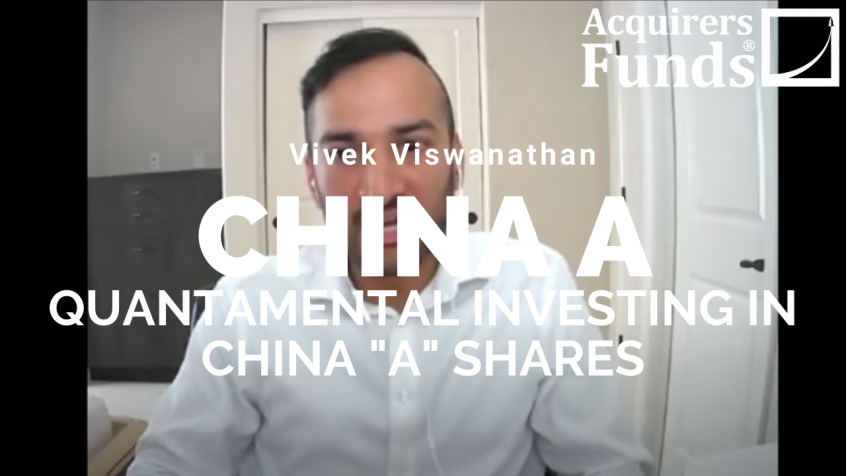 During his recent interview on The Acquirers Podcast with Tobias, Vivek Viswanathan, portfolio manager of the Rayliant Quantamental China Fund discussed Why Chinese Companies Don’t Like To Report Losses. Here’s an excerpt from the interview:

Tobias: How do you tackle the challenge of, say, accounting?

Vivek: Yeah, oh, accounting is such a beautiful one. It really is. In China, there’s something different and unique that doesn’t quite exist anywhere else, and I’m glad you brought that up. In China– well, let me first speak about the US pre-2000, because it’s getting somewhere. Trust me, trust me. In the US, if you look to the histogram of return on equity pre-2000, what you would see is that it looks mostly like a normal distribution, and then at around zero, there was a small dip down on the negative end, and around on the positive side of zero, there’s a small push up.

What that is, is accounting manipulation. If you’re at negative one cent per share, then you’d say, “God, can we just adjust earnings a little bit, accrue a few more things here and there, and then get to positive one cent per share?” That’s used to happen. Actually, it doesn’t happen anymore by the way. If you look at the ROE graphing in the US post-2000, you don’t see that. SEC brought the hammer down, and that was the end of that.

In China, the regulators have not brought the hammer down at all. What you see is, you see a cliff function. It’s nearly flat at negative ROE, and then a huge spike. Then, looks like how it should look for the most part except for one thing. There’s no right tail. If you look at the highest ROEs in China A-shares, that’s missing too. Let’s think about how does all this fit together

Vivek: I’ll explain why they really don’t want to lose money a little bit later, but there’s an incentive not to lose money in China, to not show accounting losses. What they’re doing is, they’re trying to pick up as many negative accruals as they can, when earnings are high. That’s why you don’t see the right tail. They’re basically storing up negative accrual, so that they can take positive accruals if earnings are low.

But where they really capture the push into positive effect, because that gives you a little bit. But sometimes, you had a loss in a given year. So, how do you get into the positive territory? Extraordinary items. They’ll sell things. They’ll just have something, whatever division– Well, that division might be a little bit much, but they’ll have assets, and they’ll sell them off, and earn a particular profit on them, and that’ll be enough to push them into positive territory.

You see extraordinary items used a lot more by firms that are just in the negative earnings area and can just barely push themselves over. That’s why you see that cliff function, but then what’s the motivation? Why are they doing this? The reason is, if you lose money two years in a row in China, you are classified as a special treatment stock.

That just means your price limit goes from 10%. Your daily price on China is 10% for a normal stock. It goes up 10%, you can trade below that value, but no trades above 10%. It effectively shuts down the trading, same on the downward side. When you’re a special treatment stock, it’s 5%. Plus 5%, minus 5%. You might say that’s not a big deal, and it’s not. It’s not a huge deal. But there are a couple issues. One is many investment firms will just exclude those stocks altogether. Many investors, even retail investors, will just say, “God, I don’t want to hold that stock.”

Second, if you continue to lose money, you will get delisted, which is really bad. If you lose money four years in a row, that’s it. You’re off the exchange. That’s a difference in regulatory environment that then feeds into this fairly crazy accounting behavior. Behavior that doesn’t make a lot of sense outside of context of the threat of being delisted for losing money too many years in a row.

But what’s also interesting is the accounting rules themselves are actually very similar. It’s not like you sit there and you read the accounting rules, and you say, “Hey, the Chinese accounting standards are vastly different than international accounting standards.” That’s not the case. They’re very, very similar. They’re very much in line with the variation you would see across other countries. The manifestation is different. The manifestation comes from other regulatory rules, and just other firm-specific behaviors.