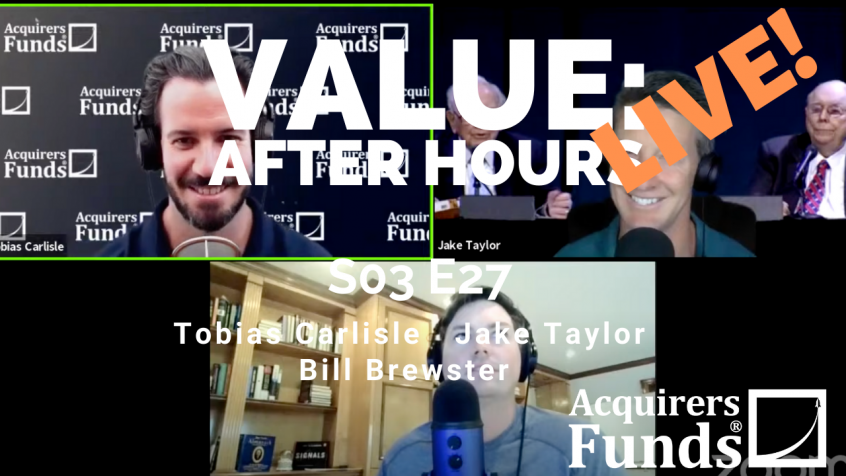 In their recent episode of the VALUE: After Hours Podcast, Taylor, Brewster, and Carlisle discussed What Can We Learn From Robinhood’s S1. Here’s an excerpt from the episode:

Tobias: There’s been an increase in the retail participation in the states over the last two years or so, probably by virtue of Robinhood. So, they got their S1 out. I know Bill’s taking a look at the S1. You got any– I think I said I wouldn’t talk about this. Sorry, mate-

Tobias: It just came to mind.

Bill: Yeah, I’m sure it just popped into your head.

Bill: Yeah. Let’s see. They settled with my family, which is preface one, and within the context of a horrible, horrible situation, I think that they made it less horrible by doing so. So, I’m going to be somewhat reserved in what I say. On the other hand, I think if you look through that company’s- how many people participate in options in crypto on that platform versus the other platforms, and the growth in those people’s participation over the last year, one, I remain unconvinced that anything that I’ve said is incorrect about the platform, especially when they cite monetizable daily active users like “Get the fuck out of here on a financial product.”

Secondly, I think there’s a lot of risk on that book. I don’t know how you’d underwrite it. That’s a fun thing that I was thinking about, is how do you figure out what is actually sustainable and what they’re probably going to grow off of when you have that a ramp over the last year? I’m trying to pull up the numbers real quick.

Tobias: One of the things that really stood out to me is the average revenue per user, the ARPU, has been growing pretty significantly in the five years or so that they posted. It’s more than doubled. I don’t know if that’s a cyclical thing, that’s what happens as markets go up people trade more, and they’re much more speculative than they would be otherwise, or if that’s they’re just getting better at extracting money out of the clients.

Bill: I think it’s both. But isn’t a little offensive to see a financial firm talk about monetizable daily active users and ARPU? I know but this isn’t a fucking advertising firm. I just wish that people would be more honest about what it is. That’s [crosstalk]

Tobias: But I think they are now being very honest, aren’t they?

Tobias: They are being very explicit about what they’re doing.

Jake: They are who we thought they were.

Tobias: Yes, somebody pointed out a surprising chunk of where it was trading Doge money.

Tobias: What have we come to?

Bill: It is an interesting time and one that is hard to argue is still inning three.

Jake: What inning are we in? [laughs] Let’s hear it.

Bill: Dude, I don’t know. But on the other hand–

Tobias: Doge money didn’t jump the shark, Doge money not enough for you?

Bill: Well, [crosstalk] that’s plenty. I guess what I’d just say is I’m not sure– we’re very financial markets focused in the profession. The underlying economy– I’ve done a fair amount of traveling in the past month, and New York was popping, Chicago was popping, and Middle Tennessee was popping. So, fundamentally, things feel much better to me than I thought that they would. But [crosstalk]

Jake: Couple of Manhattans will do that for you. [laughs]

Bill: No, man. Tennessee, I didn’t drink at all, and– well, that’s a lie, one night I did, but they were packed in like sardines. Now, we can have a discussion about vaccination rates and what that leads to, but it was very, very, very busy.

Tobias: We just got demonetized again.

Jake: Yeah, it looks the trifecta of demonetization. [laughs]

Bill: But then, dude, this is what’s tough, right?

Tobias: For a free platform? Costed nothing to trade?

Tobias: Yeah, that was the number that I saw.

Bill: I don’t know how you underwrite that. From a financial perspective, that’s the fun part of this all.

Tobias: The true trading is blowing up on that platform.

Bill: To be fair, their assets under custody have exploded a lot, and I haven’t done assets per user, because honestly, I can only look at this for so long before I get too angry.

Jake: [laughs] Yeah, there we are.

Tobias: Let me do a little segue into my bit, and then we can chew on Jake’s veggies.