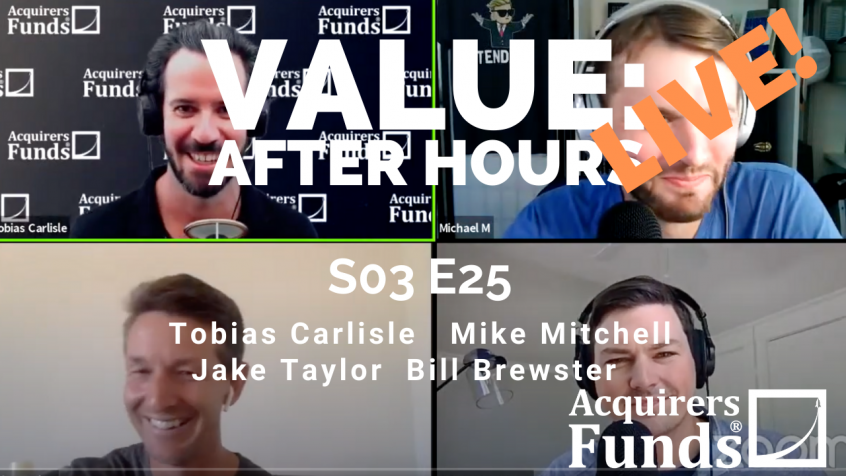 In their recent episode of the VALUE: After Hours Podcast, Taylor, Mitchell, Brewster, and Carlisle discussed How To Avoid Catastrophic Losses With Disaster Insurance. Here’s an excerpt from the episode:

Michael: Hence the parachute. That is exactly why you just go to, well, what’s the parachute? This duration conversation, you can make it really simple and right now for 25 basis points, you can protect yourself against that 50% drop in the market for 25– [crosstalk]

Tobias: How are you doing it? I’m just going to write that down.

Michael: You can go– [crosstalk]

Michael: I have no– I’ve zero. I bought zero, but let’s say you had a million of exposure and you wanted to protect yourself against–

Michael: Exactly. Yeah, it’s protecting yourself against getting cancer or something. That’s the stuff that you really– It’s going to be really expensive and totally terrible, but it’s better than the alternative.

Tobias: That’s the other approach to hedging that I really like that the only time that you hedge is when it’s a trade that is cheap, and it makes sense. You just don’t bother when it’s expensive. When you get to this point, we’re like, “Gee, the payoff here is wrong for the risk that this happened.” There’s a one in three risk that this happens, and the payoff is, it’s 10:1 or whatever it might be, 20:1.

Jake: The price implies odds that are way different than what you think they are.

Michael: That kind of drawdown has happened three times in 90 years, so it’s not less than 1%. It’s definitionally 3.3%, is how often that has happened in– [crosstalk]

Tobias: How many 50% drawdowns have there been in the last 20 years? Two?

Jake: It definitely was for NASDAQ. I’m not sure if S&P got down quite that far, but I think it was pretty close if it wasn’t.

Tobias: And what’s the other one, Mike? You’re going to go way back to 1929 or something?

Michael: You’re making me look for something I have it on my–

Tobias: Because I would have said there were a few pretty big drawdowns.