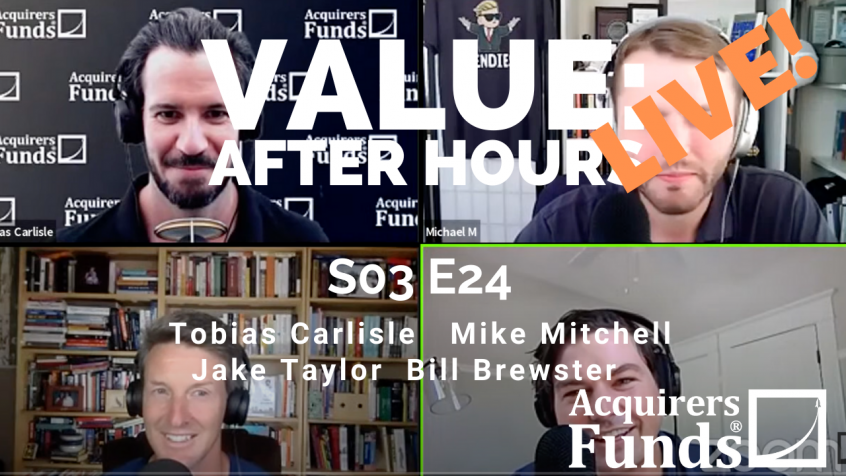 In their recent episode of the VALUE: After Hours Podcast, Taylor, Mitchell, Brewster, and Carlisle discussed Real Estate Gravity. Here’s an excerpt from the episode:

Jake: Yeah, sure. This is going to be titled Real Estate Gravity.

Jake: Right. Maybe it’s helpful. I don’t know. So, in gravity, it’s inversely proportional to the distance squared of the sphere body that is emitting it. I always wondered, I don’t know if you guys ever did, but why is it squared? What’s the mathematical relationship that’s happening there that we end up with that equation? Maybe I’m the only one who was wondering that, but [laughs]

Tobias: Some Newtonian physics there. I do physics.

Jake: Well, it’s actually simple. I’ll try to explain it. If you imagine that gravity is spread out around a sphere, like a light bulb emitting light around it, and as you move further and further out away from it, that same amount of gravity has to be then spread over an increasing surface area, because the surface area moves up as you make a bigger sphere. So, let’s imagine like a beach ball. And you have a certain amount of paint that you have in a little can and you have to spread that over the beach ball. Well, at one size, you can get a thickness to it, a certain thickness. But as you inflate the beach ball to 2x, it’s actually 4x the amount of surface area now on that beach ball, and you have to spread the same amount of gravity paint around it. That’s why the relationship is what it is.

It turns out that attractive locations in real estate in the world mobility are like large planets. There’s actually this mathematical natural law to it that researchers from ETH Zurich, MIT, and the Santa Fe Institute found. They used anonymized, aggregated mobility data from cities all around the globe, and what they found was that there’s a law that governs basically the number of visitors to any location, and it’s related to how far they’re traveling and how often they visit that location. So, it’s intuitive. People visit places more frequently when it’s a shorter distance. It just so happens that it follows that same natural law of gravity, where it’s inverse of the square.

You can imagine why this is helpful, is that it gives a baseline in cities, where you can see certain areas are overperforming what would be expected of based on the distance and the and the number of travelers that are moving around. It can also really probably help city planners to figure out like, “Okay, where do we put certain amenities? How should we set up public space, parks, things like that,” And then, also, conform public transit. My favorite thing is when you can find something in the natural world, something mathematical or physics based, and then find the human analog to it where that same principles, the same properties hold, and I thought this was an interesting one for real estate people and maybe a new way of looking at it.

Bill: I’m glad that joke went well. Is that controlled for– I don’t fully understand the analogy. I’m sorry, because I’m just thinking the amount of visitors, there’s such a high density among the coast and water. Did they control for certain things? I’m just trying to really understand what you’re saying.

Jake: I didn’t see anything that specifically pinpointed water or things like that. But I think what they’re saying is that the– There’s a baseline of what to expect based on how far away that people are from it, and the number of trips that they make. That can then tell you what the likelihood is of the attractiveness of it.

Bill: Okay. For instance, if you wanted to build Disney World, you would maybe say, “Okay, well, these are the surrounding populations and the roads that come in. So, probabilistically this is where you should think about building.” Is that we mean?

Jake: How many trips did those people take, and how far away are they?

Jake: It decays at that same square root proportion as gravity does.

Jake: [laughs] That just made my day.

Tobias: Can you use it as a value tool? Can you say that this thing’s further away from this thing. Therefore, it should be– a valuation relationship should exist between them.

Jake: I think maybe idealistically, it might be something that you could infer that this is an underperforming asset relative to the number of visitors that you would expect from a baseline of what the math would tell you, and maybe that there’s something that you need to do to– it could more easily be fixed potentially.

Bill: I wonder if this is why Orlando took off, because if you just think of Orlando in a vacuum, I know Disney was there, but that is a shitty part of the US to just pick a city.

Tobias: Send all of your hate mail to–

Bill: [crosstalk] Central Florida hate mail. I will take and field. I would be happy to debate this.

Bill: But I wonder because there’s a lot of interstates. It makes a lot of sense. It’s really centrally located and whatnot. Actually, I think Orlando’s nice city now. It’s just why it’s there. I don’t understand. But this probably has something to do with it.

Jake: Yeah, what’s interesting is that regardless of where in the world, because they had London, Japan, Chicago, I think was one of them, it’s just a human phenomenon. It’s not any particular culture.