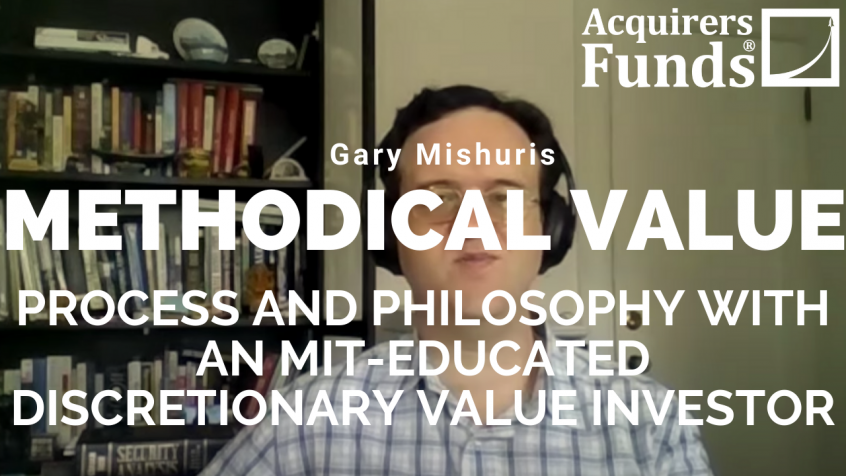 During his recent interview on The Acquirers Podcast with Tobias, Gary Mishuris, Managing Partner of Silver Ring Value Partners discussed Investing In Predictability. Here’s an excerpt from the interview:

Mishuris: I think that searching for that predictability, and therefore eliminating a pretty good majority of the universe from consideration is something that I learned from Joel, and that’s from Joel and frankly from a number of humbling experiences, which is how I think a lot of good investors learn, is that they realize that this is a humbling endeavor, and anyone who comes in think, I’m like, “Awesome, amazing, rarely make mistakes,” they’re either too inexperienced, or delusional. What I’ve got from Joel is focus on predictable, stable businesses run by honest people.

The second thing I think I learned from Joel is, I asked him like, “As value investors, how can we maintain a long-term horizon? How does that work?” He’s said, “Well, I think it only makes sense to have a long-time horizon if the value of what you’re buying is growing.” Then, I’m stuck, I’m like, “Hmm.” I think it took me maybe a couple of years to fully understand that.

I think about the standard mental model that investors have. There’s a price or range of prices. Well, I just say we just represent the range by the midpoint just for simplicity, but there is a prior value, and then there’s a price and the gap will close. Well, I think there are lot of people focus on that price to value gap, and fewer people have focused on– maybe less so now, but in general among value investors and what’s happening to the value.

I think what Joel’s point is that if the value is increasing at reasonable rates, then even if it takes five years to close the gap or something very long, you’ll still get a very competitive rate of return on your investment. On the other hand, if you’re buying a melting ice cube and the value is really dropping, you really can’t afford to have a long-time horizon. You need the price to value gap to close right now this year, because if you wait another couple of years, yeah, it’s going to close, but maybe it’s going to close the other way. So, I think the other thing that I got from Joel from this is how do you structure investment process to have time truly on your side.

Tobias: One of the ways that you deviate from Joel though is you say that he had 800 securities, whereas you run a much more concentrated portfolio than that. So, why do that, and what was the reason for the departure?

Gary: Yeah. I don’t want to speak for Joel, because I’m not qualified. But my guess is, and this is an educated guess, but I’ll leave it at that, is that if you were in the wild, he wouldn’t necessarily have 800 securities. I think it may be discipline built in a little bit, why did I leave the big firms, and kind of bring out on my own is, when you have a lot of assets, and you have various parameters, and frankly, let’s say you’re a small cap manager and you have billions of dollars, you can become that concentrated mathematically. You just will cross the threshold of ownership on the securities, and you have to have more, it’s just math.

But let’s see how [unintelligible [00:18:08] stylistically. I think that Joel had this cartoon once that really stuck with me. A guy walks into the store, and he asks the storekeeper, he says, “I want high quality in low price.” The storekeeper says, “Sure, I have both. Which one do you want?” The punchline here is that, well, if you want it– We talked earlier about quality and predictability and having honest management and having value that’s hopefully at least not declining, but maybe growing over time. It doesn’t have to be rapid growth, I’m not saying that at all, but at least, it’s not a melting ice cube. That eliminates a huge portion of the universe. Too many businesses just don’t have the track record that I would need to assess them. They don’t have the economic characteristics. They might not have the management, and so forth. Then, if you really want a big margin of safety component on the price side, that’s infrequent.

By the way, it should be infrequent, because think about– the purpose of secondary markets isn’t for guys like me to make money for my partners. The point of secondary markets is to support the primary market, which is where you connect users of capital with companies. So, if the secondary markets were vastly inefficient and most of the time the price was wildly off, that would really damage the primary market, and essentially increase the cost of capital for companies. So, you want as a society, fairly efficient markets most of the time. The deviations, when they do happen, are infrequent.