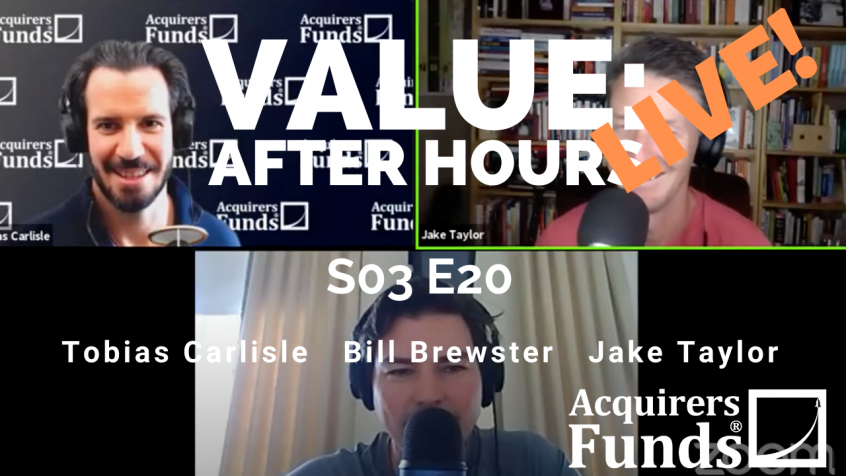 In their recent episode of the VALUE: After Hours Podcast, Brewster, Taylor, and Carlisle discussed Hanging Out With Tom Gayner At The Markel Annual Meeting. Here’s an excerpt from the episode:

Bill: A lot of the people that were at the Robotti event, and by a lot, I mean the people that I can recall, so maybe it’s just sampling bias or anchoring, or whatever the biases that I’m displaying. They like commodities, and a lot of the reason is, a capital cycle supply chain. A lot of the commodity companies are so– henpecked is the only word that I can think of it’s not the right usage of it, but they don’t want to expand capacity, because they’ve been through 10 years of shit–[crosstalk]

Tobias: They’ve all got religion– [crosstalk]

Bill: Yeah. On top of that, you’ve had some industry structure consolidation–

Bill: Yeah. The only problem, man, is I was listening to somebody who’s actually pretty smart on a podcast, and he was like, “Oh, they’re trading at 15 times earnings, and they used to trade it this.” I was like, “Yeah, but like one was peak and one was nothing, and what are we doing here?” Don’t pitch a commodity company in that way. Anyway, that was that. Then at Markel, the thing that I like about that event is you can really talk to the managers. At Berkshire, it’s big enough that it’s hard to find the managers–

Tobias: How big is Markel? How many people showed up to that?

Bill: It’s not that big. Six food trucks could serve us all?

Bill: Ah, yeah, I think so. I think that’s true. Some guys that cover insurance and whatnot. But I talked to the guy from Virginia Sprinkler, and I’d say that, he said everything that you would want a portfolio company to say about– So, he said that, basically, they’re run exactly how you’d want to. Very hands off, very decentralized, send the excess cash to the corporate, and run your own business. I thought that was super cool. Tom’s the man, he’s a nice guy, and I was really grateful that he took what I think is actually a risk to say, “You know what? We’re doing our annual meeting in public.” I thought that was a nice– I think that’s leadership. I don’t think that’s the easiest thing in the world to say to people right now.

Tobias: Rather than doing it over Zoom or something like that.

Bill: Yeah, and honestly, fuck Zoom. It’s time to get back out there. There’s enough– Come on. So, anyway, I think it was also– [crosstalk]

Bill: Yeah, well, there’s some good parts about it, but I was talking to somebody after and she was like, “Oh, did you feel safe?” It’s like, “Yes, I felt safe. I’m vaccinated. What are you talking about? What are we doing here? Why are people so worried?”

Tobias: You live in Florida.

Jake: You’ve already gotten every strain of this thing at this point.

Bill: Yeah. I don’t know. It was really nice to be around people. It was super cool. Bob Robotti had me moderate a panel and meeting him, that was cool for me. It was a nice event. I thought they did a good job all around.

Tobias: Did you hit him with one of those? Everybody must.

Bill: I did not. I don’t even know what you’re saying right now, to be honest.

Bill: No, it’s nice. I guess the other takeaway that I would have is, I got to hang out with some people from Markel, and then we went out to an alehouse, had some adult beverages, and–

Bill: Yeah, man, but the way that the person that I’m thinking of in particular talked about the company– It was a nice glimpse into culture that I think that, if you’re long, you’d be really happy that you saw it. Now, whether or not people like the business, do your own work, figure that out, but as far as the warm and fuzzy stuff about how the business feels, I think it– I have always thought it checks the boxes. I continue to think it checks the boxes, and perhaps, some of it’s because of when this occurred, but I left feeling quite good about that company.

Tobias: What’s the history of Markel?

Bill: I don’t know the detailed one, but I can tell you that it’s becoming from an insurance company that then invests in public equities, they’re now building out this private company machine where they use the cash flows from the private companies, and from the float to invest in further private companies, Costa Farms, I didn’t get a good sense of how big that was before, until they had that– I’m pretty sure that was the subject of the video. If it’s not, then I have horrible, horrible recollection. That’s a big operation. The amount of plans that they had on conveyor belts and stuff, it’s just good stuff to see.

Tobias: Tom Gayner was hired in by the family, wasn’t he? To turn it into a Berkshire Hathaway type vehicle?

Bill: I don’t know that it went down quite that way, but that’s certainly where it morphed to, yeah. I think that’s what they’re trying to do, yes.

Tobias: Where is the market cap these days? I think it was $11 billion last time I looked at it. That was late last year. That was last year [crosstalk] double.

Tobias: There we go. All right.

Bill: Ain’t nothing cheap these days, jeez. No, I’m happy for him. That was a rough year. So, glad to see him on the other end of it.