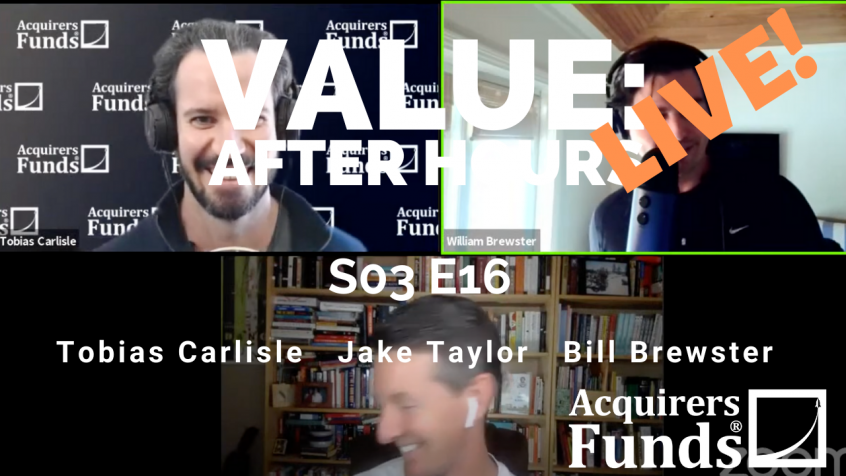 In their recent episode of the VALUE: After Hours Podcast, Taylor, Brewster, and Carlisle discussed Fading To Average. Here’s an excerpt from the episode:

Jake: That’s probably on a relatively appropriate price. It’s not really discounted at 60 then.

Tobias: No, but it’s the fair value.

Tobias: That’s my bold statement today, I want more than no return for the next decade.

Bill: It’s a good one. That’s the takeaway.

Jake: You’re not going to be a central banker anytime soon.

Tobias: That’s going to be tough to do in this market. That’s genuinely tough to do. That sounds insane, but I look at the implied returns on the market at the moment are going to be excluding the dividends are negative.

Jake: Strong, but quite strong.

Bill: What are you assuming that things fade to?

Tobias: Yeah, the long run average like 16 times. I think 16 times on the CAPE basis.

Bill: I just don’t know that I can get down with that argument, because even Google growing at 3% a year, let’s assume that everybody’s growing top line at 3%, which is not an accurate — [crosstalk]

Bill: Well, how I’m framing this is really stupid. All businesses aren’t going to trade, at the average. This is actually something that I’d love to talk to Nygren about, because they fade their exit multiple to market average. It just doesn’t make any sense to me, because let’s think of real estate for a second, and then it’s like okay, well, you’re paying a three cap in for Chicago class A real estate, but isn’t it just going to fade to the average? It’s like, no, it’s Chicago class A real estate, you got to fade it to the average of the comp set that you’re comparing it to. I don’t think that thinking that all businesses will fade to average or revert to average is, I’ve never been comfortable with that idea.

Tobias: Yeah, I understand that.

Jake: I’m very comfortable with that idea in that timeline.

Tobias: I have been thinking about that too, because I built these little models that fade over 10 years, and I’m like, why do you fade something that’s 60% return on invested capital? Fade that to average versus something to 30% return on invested capital, fade it to average over 10 years. It’s not fair to the 30% return on invested capital. Assuming everything else is the same, because the one that’s earning 60– [unintelligible [00:13:10]. That, everything else being equal, is twice as good. It’s not fair to fade at that quickly, whereas it should have– I don’t know exactly how you build it out, but you say it fades at a fixed rate, and therefore the 60 should fade slower than 30. We should get back to average slow, like should take twice as long maybe to get back to average.

Bill: Yeah, I guess one of the things that I’m thinking of is Air-Maze. Air-Maze has been Air-Maze, since my grandma was a little girl. It has never, everyone that has ever said this brand is going to fade has been completely fucking wrong. Is that the outlier? Yes. Ferrari, too, I think that you can look at what that brand has done. Disney has gone through some really bad spots. Maybe media assets are slightly less durable. Maybe luxury is just this version of CPG, and maybe luxury is all of a sudden going to get hammered. I don’t know, but what I do know is, I just don’t think Air-Maze is an 18 times business. It’s very, very hard for me to get my head around why that would be a valid assumption under any type of reasonable circumstance, like it’s actually foreseeable. Other than, well, it must happen, but that’s not really valid to me.

Tobias: It’s fashion. It’s hard. For every Air-Maze, there’s dozens of others that have completely disappeared or ruined their brand.

Bill: That’s the point. There’s only one. That’s not an average business. Yes, I agree. Michael Kors and Air-Maze are way different. Michael Kors, Polo Coach, all that shit’s the same. Air-Maze is different. Those should trade at a multiple. That is what that multiple is. Air-Maze is a completely different animal.

Bill: Because it is, because they treat that brand with the respect that it needs, because they control distribution, because it’s not a mass market thing that’s got 10,000 stores all over Michigan Avenue, and they can’t wait to expand, because they restrict the supply.

Tobias: Wait till you get a CEO comes in and says, “You know what we need to do? We need masstige, because we’re being left behind by all these other guys who are selling–[crosstalk].”

Bill: Okay, well, then you sell. Then you don’t even fucking wait for the fade. You just sell.

Tobias: But for a period of time, they’re going to make a lot of money.

Bill: No, you sell, you’re out. It’s a fundamental strategy shift that makes no sense. I wouldn’t sit around and wait for the numbers to prove that at all. I think then you get waxed. That’s the game I play. I don’t know what other people do. If I don’t agree with the straight, that’s why I sold Comcast. I don’t agree with their strategy in their media assets at all, and I don’t know how to handicap how much money they’re going to burn. Brian Roberts is a great CEO. I hope that people that are long in it make a lot of money. I know the stocks cheap relative to other cable assets. I don’t agree with their strategy, so I’m out. That’s how I invest.