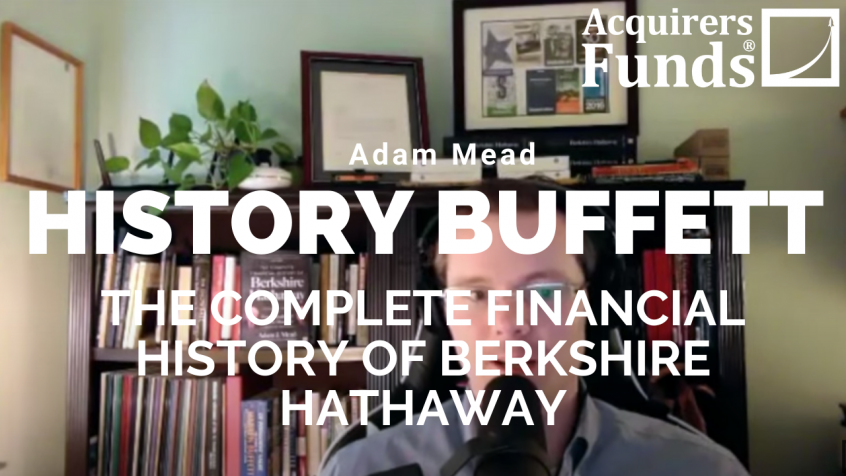 During his recent interview on The Acquirers Podcast with Tobias, Adam Mead, author of The Complete Financial History of Berkshire Hathaway discussed Berkshire Hathaway: The World’s Greatest Conglomerate. Here’s an excerpt from the interview:

Adam: If I could have gone– and I didn’t have any explicit limitation, but I stopped. I wanted to have a chapter on conglomerates and actually that spreadsheet that I referenced has a couple of tabs on these early conglomerates. Textron, ITT, LTV, Ling-Temco-Vought. These early conglomerates of the 60s, they were a trend, they were the hot thing of the day, they didn’t really work out, because they were based on accounting machinations and trying to put together businesses that really shouldn’t be put together or tinkering in them.

Berkshire really benefited– and part of it was luck, let’s say it how it is, in starting so early, they had the benefit to find all of these great businesses, put them together and do it in such a way that it really maximized business potential, but also human potential is the way I’ve put it in that– I think it was their early years and I say they, Munger and Buffett, of operating investment portfolios of stocks. So, the way I’ve termed it as a portfolio approach, they really don’t care whether they own 10% or 100% of a business, it’s all the same to them.

I think it was natural for them to put these businesses together under the same roof in terms of ownership, but leave them alone from an operational standpoint, and maximizing the potential of each individual business, like we just talked about in terms of taking the cash, but not meddling in the operations and to put together this insurance powerhouse, and all of these operating businesses, and to do it in a really sustainable way that has rightly garnered so much appreciation today. Even though, I don’t think it’s fully appreciated what Berkshire Hathaway is today in terms of the ways in which, it allows businesses to maximize their potential, but does not step on the toes or try to meddle in operations, it has the best of tax implications, as well as the operational things that they’ve done.

I think even in the book, I say, I won’t say it will never happen, but I think just again, that the luck that they started when they did, the time in which they’ve had to compound this thing, it probably will not be eclipsed, I won’t say never, but I think it’ll be a very, very high bar for anybody to jump over.