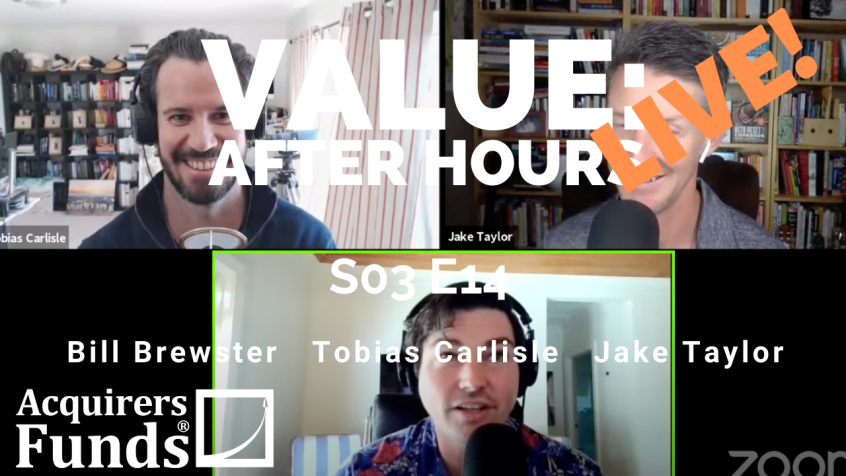 In their latest episode of the VALUE: After Hours Podcast, Taylor, Brewster, and Carlisle discuss Insect Groupthink. Here’s an excerpt from the episode:

Jake: Okay, I’ve got a little bit of a shorter piece today that I’m calling Insect Decision Making. Sorry, not a sperm whale related, but we’re in the ballpark. [laughs]

Bill: [laughs] Everybody comes for the sperm whales.

Jake: Yeah. This is from actually a 2014 Wall Street Journal article by Robert Sapolsky, who is a researcher and a professor at Stanford, and he’s one of my favorites honestly. I’ve been watching, working through– He has a genetics behavior, sexual reproduction course that he taught at Stanford that’s online on YouTube. I think I’ve talked about t on the show before, but I love it. I’m about three quarters of the way through it, and each class is two hours long, so you’re watching a whole class. He’s such a good lecturer, he’s so funny if you’re, I guess, nerdy like me, and like jokes about DNA and stuff. [laughs]

Anyway, he wrote this article. It’s actually from one of our friends of the show, Bakul. Thank you, Bakul, for sending that over. Bees, as you guys know, do this dance to signal where resources are. They’ll communicate the direction and the distance based on how they dance. What it ends up happening is that, if they really like it, they will dance for even longer than normal, and that odds of when a bee comes into the hive, they will see that bee increase which then they’ll go check it out and come back. So now, you have two bees, and then two bees, more will go and now you have four and then eight and before you go at–[crosstalk]

Toby: They are doing the happy dance.

Jake: They’re doing the happy dance, and they’re exploiting the environment through that way and are able to communicate. This is wisdom of the crowds playing out, because the signal gets amplified. No bee actually investigates both sites, and yet, somehow the hive is able to arrive at what is the best one to exploit. They did this other study of ants. They gave them two nests, and they had a group of ants go and look at the two nests. The ants had to choose which one they were going to take as a nest. The difference was that one of them was well lit, and the other one wasn’t. The ants prefer a dark interior for their nest. They had both groups of ants go and they would decide which nest to take, and then they had individual ants who would go and decide where to set up shop.

What’s interesting is that when the choice was difficult, the comparison, like a very, very minute difference between the darkness of nests, the group of ants actually came up with a better answer. This is probably due to, like I said, that amplification of choosing the best one, the iterative decision making that happens as the group decides, as well as the cancelling out of errors, like somebody makes an error in one direction, another one makes it on the bottom, and they cancel each other out.

Well, this is the most critical part of the whole piece is that, when it was an easy task, when there was high difference between the lights inside of the nest, the individual ants actually make better choices than the group. Sometimes, the group would take– the feedback would get out of control and push it into a direction that wasn’t the right way to go. The individual rarely made that mistake, because it was so obvious. Think about that for a second from an investment context and how much time do you spend in groups sort of working through your investments and coming up with ideas versus by yourself. I can’t help but think about this guy in Omaha that is looking for the one-foot bar, the very large discrepancy in the lighting and he’s not asking the group for opinions about it. He’s looking for the most simple explanation. He’s very comfortable to do it by himself. Thoughts?