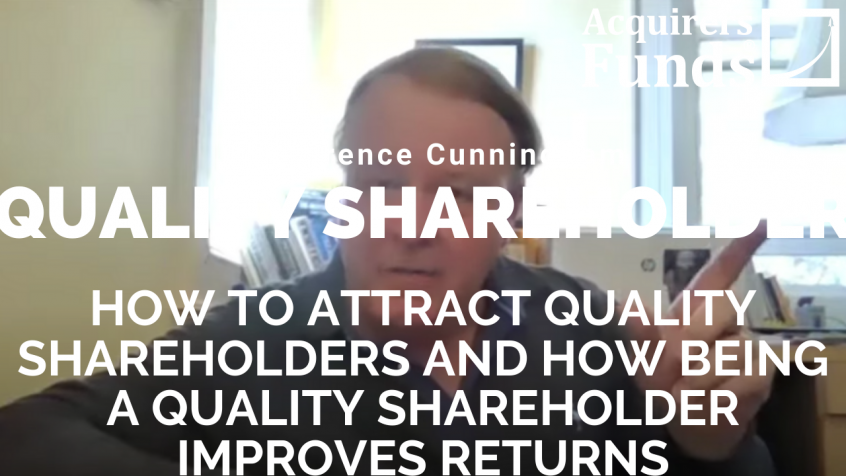 In his recent interview with Tobias, Lawrence Cunningham, author of several books including The Essays of Warren Buffett, Dear Shareholder, and Quality Shareholders discussed Validation Capital–When Activists Try To Seize Control, These Shareholders Come To The Rescue. Here’s an excerpt from the interview:

Lawrence: The related point, then, is that when a short-term activist argues for a new strategic direction, sometimes they’re right. When the activist overzealous and unduly short term, the CEO with a base of long-term focus shareholders can go to them and say, “Do you agree what they’re trying to do here? Tell me if you do, we’ll change course. But if you don’t, will you help me persuade them that this is not the target they should hit?” That has been a– I’ve got an article coming out, or it just came out? I’ve got an article recently out in MarketWatch, explaining that use of quality shareholders. Those are three big reasons, and the book identifies another half dozen, there’s almost no downside. [laughs]

Lawrence: I gave quite a few different examples. The inspiration was, there’s a new research article by some professors I know called Validation Capital. They observed in the past bunch of years, companies have identified block holders who have validated manager’s strategic direction in a way that warded off activist holders. I thought, “Oh, that’s interesting–” so this came out two weeks ago when this will air, but I would say around February 20th or 15th, the article came out and it’s called Validation Capital.

That inspired me to look back and think, in the 1980s, Warren Buffett was famous for among other things, being a White Squire. That was a phrase during the battle, the takeover battles of that era. When a company would secure a large block holder, who would be faithful, supportive, not a sycophant, but just who would listen and ideally understand management’s view and deter hostile bids. Warren bought large stakes in convertible preferred stock of five or six different companies. Gillette, Solomon, Champion, US Air, where he was aligned with the prevailing strategic direction, and they were aware that there were hostile bidders prowling and so he served a defensive purpose.

What I took from this validation capital, you know what? There are a lot of quality shareholders today who provide a similar validation. The best example I had, or I’ve got a bunch of them in that column and they’re in the book too, was where about three years ago, a chemical company, Ashland Global, was targeted by a relatively small activist, but they can be fierce [chuckles] small, I think it was called Cruiser Capital. I think that was the one. The board got the letter, the proposal. They didn’t think it sounded right. They called their long-term, concentrated shareholders and they had a bunch of them. The largest, I guess, and longest was Neuberger Berman, which is widely known to be a stock picker and a buy and hold type of firm, and ran the proposal by them. Neuberger said, “No, we agree with you.” They contacted a few other long-term focused shareholders and asked them the same question and they all agreed, “This is not a good strategy.” The board was able to tell the bidder, the insurgent, “Good luck, because our shareholder base is not interested.” The fellow went quietly away.

I’ll give a couple another good examples. RenRe, Renaissance Reinsurance, which is a Bermuda based insurance company listed, I think, in New York Stock Exchange, received an overture and it happened that at the time, it was negotiating for an additional issuance of common stock to State Farm Insurance, also a revered quality shareholder, most of its portfolio is long term and concentrated. They had a 5% stake in RenRe and they were negotiating for more. They upped their stake, they doubled their stake. All of a sudden State Farm owns 10% and they were quite supportive of the existing strategy. RenRe was also in the middle of negotiating the acquisition of a Japanese insurance company called Tokio Marine, they had been planning to pay in cash, but when this insurgent hit, they said, “Well, why don’t we pay in stock? You’ll become a five percenter, forget the figure, meaningful holder.” They had a long-term relationship with Tokio Marine, they knew they would be the long-term focus shareholder that State Farm had been and so on. All of a sudden, they had 15% in two holders, and then had a few others like that, and they were able to go back to the bidder and say, “We don’t share your view, and moreover, lots of the shareholders don’t either.”

It gives managers leverage, I guess the advantage to a company and to an incumbent board that, especially in today’s environment, where activists have very loud megaphones, amplified voice. They’ve got a well-developed professional ecosystem of advisors, lawyers, bankers, and funders, and proxy advisors, and their own shops have very talented repeat players in this game. So, if you are targeted, it helps to have shareholders who you can talk to, who will listen to you. Many indexers are unavailable a lot of the time. Again, they’re not sycophants. Neuberger Berman isn’t going to just jump because some board says so, but they will at least be a sympathetic ear and maybe a strong partner in supporting the board and management’s case.