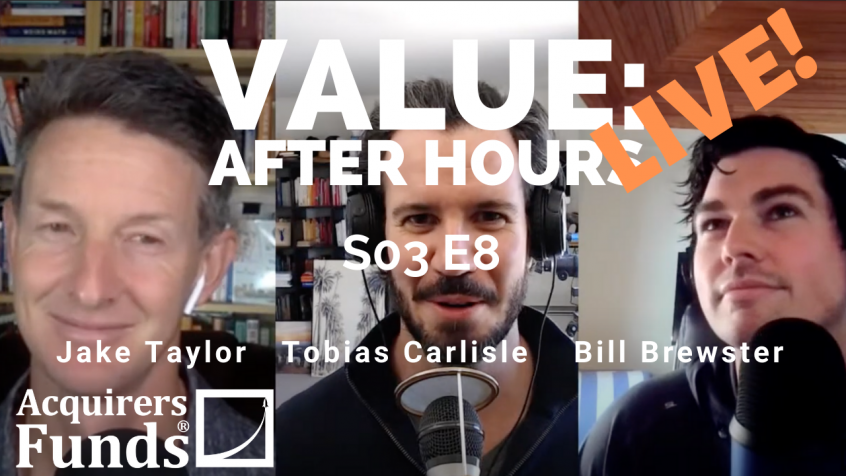 During their recent episode of the VALUE: After Hours Podcast, Taylor, Brewster, and Carlisle discussed $Bitcoin Bulls. Here’s an excerpt from the podcast:

Bill: No, it’s okay. I appreciate you setting it up. Sometimes ,my mind is very vague, and people are lost when I speak. Anyway, if you just take a step back and think about what that guy did. He was on arguably the biggest financial podcast at the time. He got an idea in his head through thorough research that he wants to bet on. He put his reputation on the line to bet on something that his heroes have referred to as rat poison, and he fucking crushed the call. People are mad that I gave him props, that is really hard to be public. He’s not a hedge fund manager. He was a guy who was on a podcast that’s running, I perceive, his own money. I may be wrong on that. It’s not like he’s Dan Loeb out there making public calls at Sohn, and he crushed the call. If you’re mad at that, you need to look in the mirror and figure out what you’re mad at and tip your hat to a guy that has some balls and has some success.

Now, secondly, if you are someone that’s listening to podcasts, such as ours or theirs, for any type of learning purposes, and you have found yourself in some huge winner, such as bitcoin, I would just encourage you to be really honest with yourself about how much you know and understand that right now, some of the sharpest money in the trading world is trading bitcoin against you. I don’t know if it’s the right thing to own or not. I haven’t done the work to have a strong opinion. I will tell you that I am far, far further away from this as Hocus Pocus than I ever was. Part of me thinks an idea has– I think that it has merit as an idea so long as it has merit as an idea if that makes any sense. It’s a bit circular. But the more it continues, the more I sort of buy that. Bill Miller has articulated that thought in the past. I’m not the only person that’s thought it. I sort of get it. I just think if you’re up this much– The way I put it last night is I said, “Classic cars are ripping, baseball cards are ripping, bitcoin’s ripping harder. Are you right? Are you trading some super juice trading vehicle?” I don’t know, I could be wrong. I would just hope that if you’re up big, risk mitigation and risk management matters at some point and consider your own personal equation and maybe it’s time to take something off the table.

But if you’re mad at Preston or me for complimenting Preston, you really should take a real long think about why, because that’s not about us. That’s about whatever you see in the mirror.

Tobias: Why do you say that the smartest folks in the room are trading against bitcoin at the moment?

Bill: Oh, well, I don’t think they’re trading against. I think they’re trading it. Those guys are sharp, as far as traders. I don’t know what their returns are. I don’t think traders in general have the greatest returns. I happen to not understand macro in the way that I think I would need to trade that vehicle very well. I think anytime you get that volatility in a vehicle, you’re going to get really good traders into the picture because it’s just too enticing not to trade it, I would think. Do you agree?

Tobias: I’m not a trader. I don’t know. [chuckles] I have no idea. That kind of volatility scares me honestly.

Jake: I think it lays out one of the real problems with any asset that you can’t fix some kind of fundamental to very easily. It’s, one, if it goes down, how do you know you’re still if you’re getting an even better deal? There’s no anchor for you. Then, two, if it goes crazy high, how do you know when it’s gone too far? What would be the price then– I would ask everyone who owns Bitcoin, is there a price at which you would sell? Have you determined what that is? Did you determine that before you bought it? That’s really probably the best practice. You don’t wait until you’re up 5X and you’re drunk with return and thinking that you’re a God. It gets really tough then to decide what the right time to punch out is because you’re high, you’ve got to keep pressing your bet.