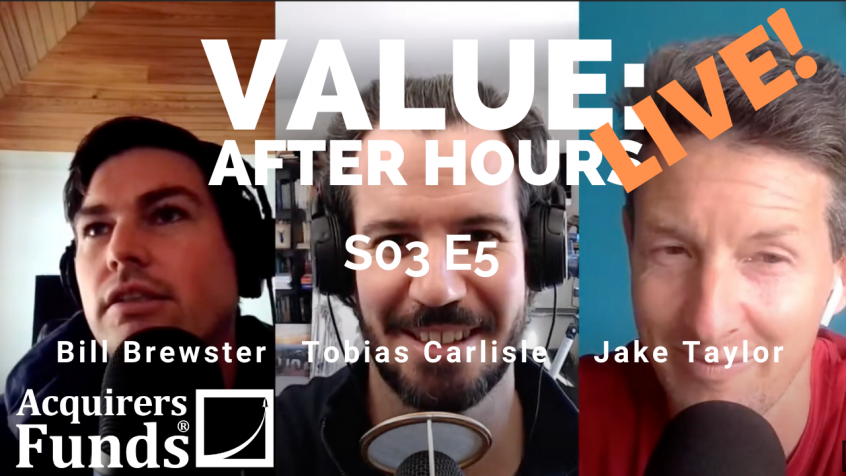 During their recent episode of the VALUE: After Hours Podcast, Taylor, Brewster, and Carlisle discussed Robinhood’s Trading Halt. Here’s an excerpt from the episode:

Jake: Do you guys have any thoughts on the shutdown of trading and stopping order flow?

Bill: Oh, yeah, that I did. I am sympathetic. This is where I’m sympathetic to the degenerate gamblers. My buddy bought into Blackberry. I told him not to do it, but he was like, “I’m doing it.” Then when they stopped them, they did change the rules on them. He’s like, “Dude, what the heck? It can’t go up because people can’t buy enough of it.” All of a sudden, you have put circuit breakers into the potential of the gambling, which part of me gets upset that there’s gambling in the markets, but the other part’s like, well, it was going on anyway. Once the dance is going, cutting the music doesn’t seem very sportsman like.

Tobias: It was illiquid. It was a solvency liquidity issue for Robinhood, wasn’t it? That’s the thing that I find most amazing. That’s the most frightening part. That’s the scariest thing you can possibly hear that a broker rode the very peak of like, we’re basically at all-time highs and there’s a broker having trouble. What?

Tobias: What happens if the market goes down a bit?

Jake: Yeah, it’s almost like they don’t pay attention to KYC at all.

Bill: Get out of here. Then, these VCs saying, like, “Oh, it’s not our fault,” or whatever. “SoFi is just as bad.” You guys all make me sick.

Jake: Yeah. I mean, pimping your customers to Citadel and then pretending like you’re democratizing trading, that’s a little offensive. It’s gross.

Bill: Yeah. It’s [crosstalk] closed out any of your funds, good. I didn’t want them anyway for my rant.

Jake: Yeah. Send all the hate mail to Bill.

Bill: Man, I’m happy to have the conversation with some of these guys. I think it’s nonsense. I think these guys that sit behind this, we’re democratizing investment thing. It’d be one thing if they weren’t in finance and they just didn’t know better, but the fact that they know better, and they still make– how freaking greedy are you? You’ve really got to sell that? You don’t have a soul or any integrity.

Tobias: How are they getting paid otherwise?

Bill: I don’t know. Some of these guys– look at the VC backers in Robinhood. You can’t pass one dealer, like not one? You’ve got to go out, and you got to be loud about how you think you’re democratizing investing. I know you’re not,-

Tobias: But that’s the game, right?

Tobias: They’re all the rebels before-

Tobias: -the Empire. Yeah, that’s the oldest marketing trick in the book.

Bill: There’s a difference between quietly backing something and then going out and giving Wall Street Journal interviews, obviously pumping a false narrative. That’s fine. I’m a no one. I don’t respect them. They don’t need to care that I don’t respect them. Next. Our lives will both be fine, never crossing paths.

Tobias: Yeah, I never thought for one second– [crosstalk]

Bill: What do I care?

Bill: Well, in this notion of a lot of our customers are buying hold, okay. Just look at the options flow through each platform. It’s pretty obvious what’s going on here.

Tobias: You don’t buy and hold in options.

Bill: No. Well, that’s my point. It’s not like they’re empowering any individuals for real. We’re turning people into degenerates or facilitating the process. I won’t assign the blame. I will say they are nudging people to the wrong place.

Tobias: What do you think happens? What are you worried about?

Tobias: Should you have faith in the financial markets?

Bill: Yes. I think that on average, America’s capital markets are something that people should be proud of as Americans. We might think that there are bad things that happen in it? Yeah, I do.

Tobias: We’ve had speculative. We’ve had lots of trading before. We’ve had booms and busts before. This is nothing new. What’s new? What’s different?

Jake: The other thing that concerns me is that there’s already a fair amount of populace. A lot of people felt like they have been left behind in the last 20, 30 years. If you gave them that little bit of hope like, “Oh, maybe I can get rich this way,” like all these other people have, and then you take it away– even if it was for true liquidity reasons, that they actually had to stop taking orders, that’s too nuanced for them to care. It feels like you stopped the clock in the third quarter when I was winning, and now you change the scoreboard and I’m losing. To use Chris Cole’s ideas about– risk doesn’t get destroyed, but it can be transmuted. I think you’re turning what was trying to squash financial risk of overspeculation and turning it maybe into pitchfork risk. It’s just one more thing for people to be upset about and feel the game is rigged.

Tobias: Do you bear any responsibility as an individual investor piling into something like that, though. You can’t be that stupid that you think this is just free upside.

Bill: No, but, dude, that’s what I’m saying why I have some sympathy with the gamblers because my buddy that bought Blackberry, he knew exactly that he was gambling. It was already going on. Then once you restrict my ability to buy or other people’s ability to buy, well, now you sort of like screwed me in my gamble. You’ve changed the dynamics. The problem is, you’re not playing a game with the same power that everybody else is. I think people learned real quick, maybe their assumptions weren’t.

Tobias: What’s the reason Robinhood had to shut it down? Why are they taking any risk at all? Why aren’t they just facilitating the transaction?

Bill: I don’t know the answer. Jake, do you know?

Jake: I probably don’t know enough to say for sure. They have to have certain collateral requirements-

Jake: -with their broker.

Bill: With the with the clearing house and they have [crosstalk] post collateral-

Bill: -given what was going on they needed to raise capital to stay within the regulator’s requirements is my understanding– [crosstalk]

Tobias: It happens all the time that the collateral requirements in your account move up and down, you get a notice regularly that you need to put more collateral up, that’s something they do in the PA.

Jake: Hopefully not too regularly.

Tobias: They just changed the rules halfway through. That happens all the time. That’s not uncommon.