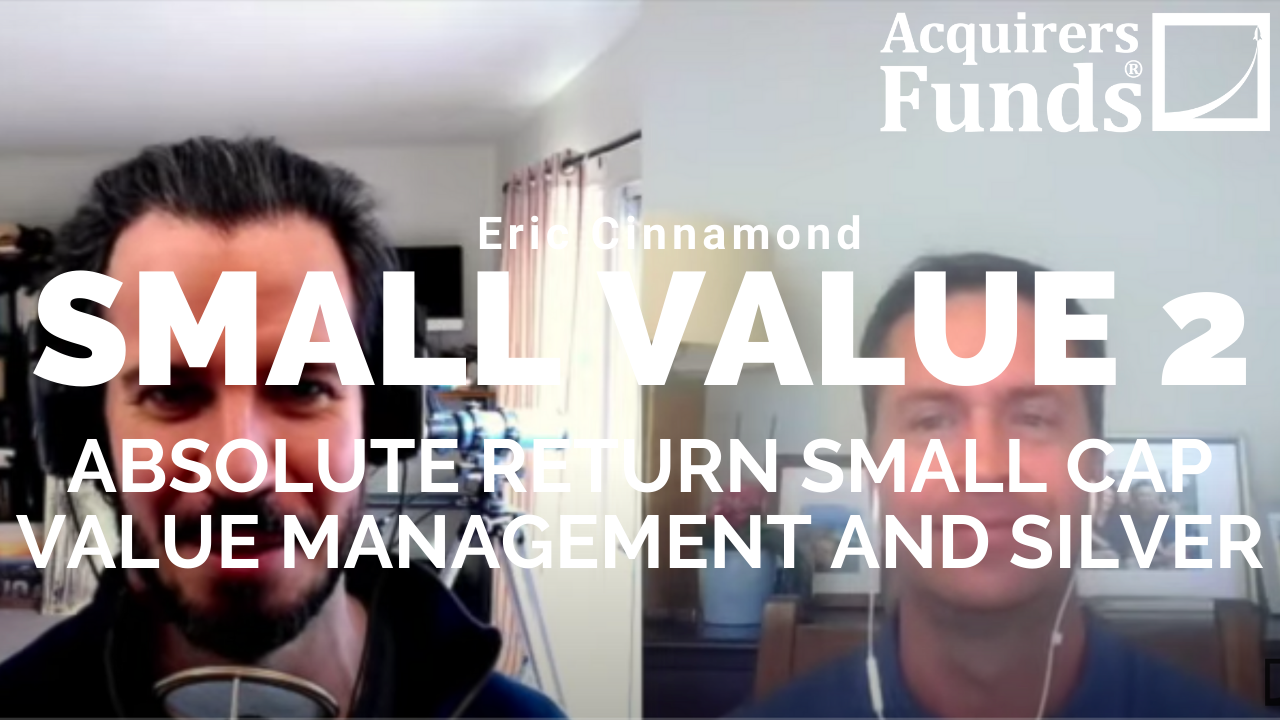 During his recent interview with Tobias, Eric Cinnamond of Palm Valley Capital discussed The Stock Market Snowball. Here’s an excerpt from the interview:

Tobias: It sounds to me that the two causes in your mind of what’s happening in the markets. First of all, it’s the Fed just pinning rates way too low for way too long, and everything else that they’re doing. Secondarily, it’s this trend towards passive where the flows drive the returns. I’ve got to ask, why do you really care whether the bigger companies keep on getting those flows and growing when– the absence of flows to the smaller companies creates these opportunities?

Eric: It does, but I would say it’s definitely been [unintelligible [00:24:29] to the smaller passive investors, smaller caps. Given the valuations, there has to be. The Russell 2000 troughed at 980 in March around, and it’s over 2000 now. Small caps got cut in half, and now they’ve doubled. [crosstalk]

Tobias: [crosstalk] Well, everything seems to stretch past where it was last year before the crash.

Tobias: With everything going on, it’s amazing.

Eric: Oh, yeah. With everything going. NASDAQ in 1999 was up 86%. I was like, “This is crazy. It can’t get much worse than this.” Then it proceeds to go up another 2030 before it crashed. There’s no reason these markets can’t go higher. The large caps– people often view stock market bubbles as natural bubble. I like to think of it as a snowball. The beginning of the cycle, you’ve got a small snowball, and you’re rolling it up the hill, and it gets bigger and bigger and bigger and bigger. By the time you get to a very steep part of the hill, the snowball is so big, it needs so much more force, so much more capital to push the snowball up the hill. If you look at the Wilshire 5000 right now, the market cap’s like $40 trillion. And then if you look at total tradable debt securities, it’s like $60 trillion. So, now you’re about $100 trillion snowball.

Eric: You’ve got the Fed buying $120 billion a month, and you’re like, everyone thinks, “Oh, that’s a huge number, that’s going to save us.” You annualize that, and it’s like $1.45 trillion, but that’s tiny compared to the snowball. The snowball is going to need a lot more if you’re going to keep pushing this thing up because the higher prices get on debt and equities, the bigger the snowball gets, and the steeper the slope gets, it’s harder and harder to push it up. Everyone that has this belief that the Fed can always be there for us, always manipulate stock prices, always keep the assets where it should going, I think they’re losing track of how big the snowball has gotten. At some point, you go $100 trillion, $150 trillion, what is $1.4 trillion? Even if they move it up to– what’s the balance sheet, $7 trillion? Were they going to make it 50 trillion? I don’t think so.

Eric: [crosstalk] -dollars. At some point, that snowball, and every cycle has proven this, starts to roll back. There’s not enough capital to keep it up, and then it goes back and it crushes everyone trying to push it up. It goes all the way down the hill, and now the snowball is small again. That’s when Jayme and I come in. We have a small, small snowball, we start pushing it back up the hill, where we start to allocate our capital. We watch from safe distance at the lodge while we’re sipping our tea and watch the giant snowball that gets harder and harder to get up the mountain.